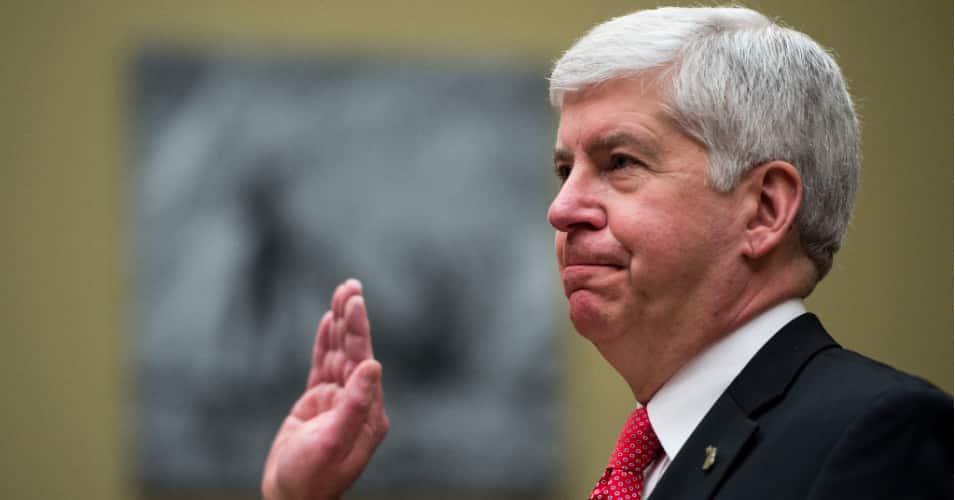 The scandal with Michigan Governor Rick Snyder and Flint’s lead-contaminated water is getting thicker.

Shortly after the City of Flint changed its water source to the Flint River from Lake Huron, emails indicate members of Snyder’s administration urged to switch back to the old water source “before this thing gets too far out of control.”

Flint’s water source was changed in April 2014 as a cost-saving measure. The city, run by the governor-appointed Emergency Manager made the switch to the corrosive river water. The Guardian points out that Michigan’s Environmental Agency didn’t require the pipes be treated with anti-corrosive agents which would have kept the lead from leaching off the pipes into the water system.

In emails released Friday, the governor’s administration internally advised providing Flint residents with bottled water a full seven months before the Michigan governor publicly admitted there was a problem in October 2015. We know from the timeline, this advice was roundly ignored.

In one email, the governor’s then-chief of staff, Dennis Muchmore, said in March 2015:

“How about cutting a deal with Ice Mountain [water company] or [Absopure Water board member] Bill Young and buying some water for the people for a time?”

Valerie Brader, deputy legal counsel and senior policy adviser to Snyder, wrote to Muchmore and three other aides within the administration that Flint needed to switch back to the old water supply and that it was an “urgent matter to fix,” in an email from October 2014:

“As you know there have been problems with the Flint water quality since they left the DWSD [Detroit water and sewerage department], which was a decision by the emergency manager there…”

Bader also cited bacterial contamination, related to the rise in Legionnaire’s disease (though no connection to the water has been made yet), as the reason to make the switch, as well as “rusted GM parts.”

Minutes later Snyder’s legal counsel Michael Gadola emailed back saying it was “downright scary” the Flint river was being used as a water source.

This occurred on the day after General Motors engine plant stopped using water from the Flint River because parts exposed to the water were becoming corroded.

“Chloride levels in treated Flint River water are so high that General Motors will no longer use it at its engine plant here because of fears it will cause corrosion.”

But though the Snyder administration was well aware of the problem, the move back to Lake Huron’s water system was deemed too costly at the time. The cost was assessed at $12 million.

“The assessment was you couldn’t do it because it was a cost that should have been borne by the system.”

It was in March 2015 when Muchmore suggested Michigan supply the City of Flint with bottled water. Muchmore also claims the governor was fully apprised of the situation.

The emails were not released with Snyder’s original email dump — his effort to appear transparent — in January or through records requests because they were not subject to the Freedom of Information Act because members of the administration had not copied DEQ in the emails, purposefully it seems.

Bader wrote in one email:

“PS Note: I have not copied DEQ on this message for FOIA reasons.”

Snyder said in a statement today:

“[The Flint crisis] is the result of failures at all levels of government — city, state and federal.

“We need to look at what happened at all levels, but as the one ultimately responsible for what happens in state government, I am taking steps to help correct what happened there. I will continue to take steps that will help make things right and support Flint along its road to recovery,”

After the recent email release, residents of the state are still calling for Snyder’s resignation.

“There’s no reasonable person who can believe at this point that every adviser to Rick Snyder knew that there was an issue [in Flint], but Snyder knew nothing.

“At worst, he’s been lying all along and at best he’s the worst manager on the planet. Under either scenario he’s clearly unfit to lead our state and should resign immediately.”

When you’re the governor of a state, you have to put people before cost. As with our current Republican administration who is budget-focused and dollar-minded, this is the price — a city full of poisoned people, with effects that will last for decades to come.

With this new email release, it’s impossible to believe the governor never was made aware of the extent of the problem, while Snyder’s administration appear to be fully mindful of the fact the Flint River was not a safe source of water. Rick Snyder should resign.