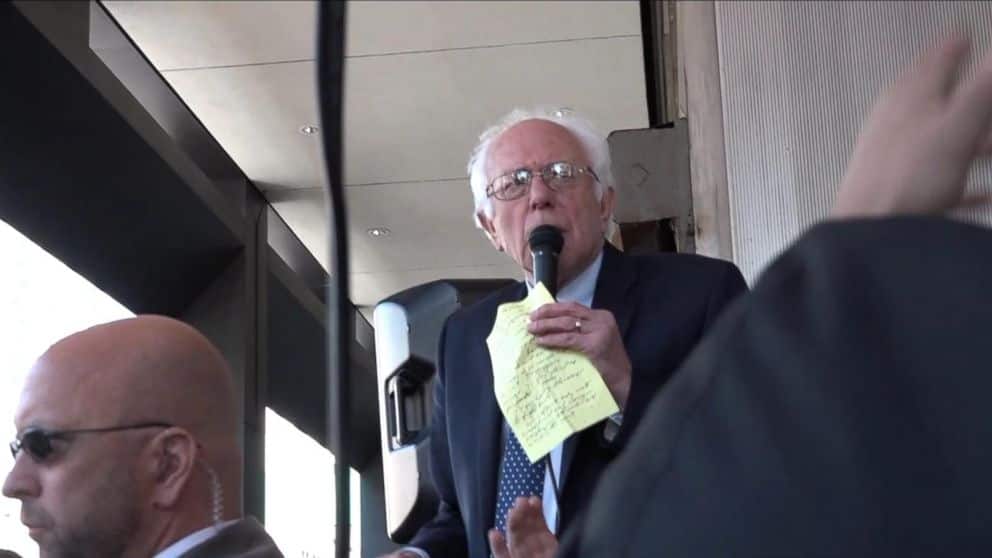 Wednesday in Brooklyn, workers in multiple states with the Communications Workers of America (CWA) union and the International Brotherhood of Electrical Workers (IBEW) union went on strike. The strike comes after the company failed to renew their union contracts which had expired over eight months ago while the corporate giant allegedly fought to cut pensions benefits and change rules so they could outsource more labor and take more jobs out of America.

Not on Bernie Sanders’ watch. The Democratic presidential candidate showed up to the strike and spoke to a crowd of over 800 striking employees according to the Washington Post, and said:

“I know that going on strike is not something that’s easily done. I know there’s going to be a lot of pain involved. I want to thank you for standing up to the outrageous greed of Verizon and corporate America.”

Sanders also pointed out that Verizon Wireless wanted to give the CEO a salary raise of $20 million/year which garnered lots of ‘boos’ from the crowd. Sanders also said the company was trying to avoid paying federal income taxes.

“This is another corporation trying to destroy the lives of working Americans.”

After Sanders’ speech, the CEO of Verizon Wireless released a statement “Feeling The Bern of Reality — The Facts About Verizon and The ‘Moral Economy’” saying that Sanders didn’t have all his facts straight and that the American people deserved more from a President than simplifications of a complex issue.

“I challenge Sen. Sanders to show me a company that’s done more to invest in America than Verizon.”

Adding that the company had paid billions in federal taxes (at a rate of 35 percent) over the last two years, and gave billions to the U.S. towards infrastructure in America. McAdam also said that all of the union’s contracts still in negotiations since last June included wage increases and continued pension benefits.

While Verizon Wireless did pay their taxes over the last two years, they paid nothing in taxes between 2008 and 2012. So McAdam is the one who doesn’t quite have all the facts on his side.

Last year the CEO made $18 million for the year, so that part of Sanders’ claim rings true. McAdam falsely accused Sanders of circulating the false claim that Verizon is trying to outsource more jobs, but that didn’t originate with Sanders, it came from the union. So already we’ve caught McAdam in two lies, and he has the audacity to claim that Sanders is the one lacking facts!?

And why then are 40,000 workers in various states striking if the company is claiming they’re offering great contracts and the union is simply stalling the process? After all, it isn’t Sanders who made the accusations against Verizon, but the unions, yet McAdam made Sanders’ speech the focus of his statement.

Here’s what the CWA is claiming in their statement:

“The company wants to gut job security protections, contract out more of our work, freeze our pensions at 30 years of service, shutter call centers and offshore the jobs to Mexico and the Philippines. If we don’t accept all of these changes, they will require technicians to work away from home for as long as two months at a time, anywhere in the Verizon footprint, without seeing their families. Verizon has also totally refused to negotiate any improvements in wages, benefits or working conditions for Verizon Wireless retail workers who formed a union in 2014.”

“I am disappointed to learn that negotiations have broken down between Verizon and their workers, represented by the Communications Workers of America and the International Brotherhood of Electrical Workers. Verizon should come back to the bargaining table with a fair offer for their workers…Instead, Verizon wants to outsource more and more jobs.”

Sanders has been endorsed by the CWA, and Clinton is supported by the IBEW.

And while it’s nice to have two competing Democratic candidates in agreement, it’s important to note only one candidate has repeatedly stood shoulder to shoulder with striking unions — Senator Bernie Sanders. He is the one who strikes fear into CEO’s such as General Electric and Verizon Wireless because he has the facts on his side, and they don’t make corporate giants look pretty.