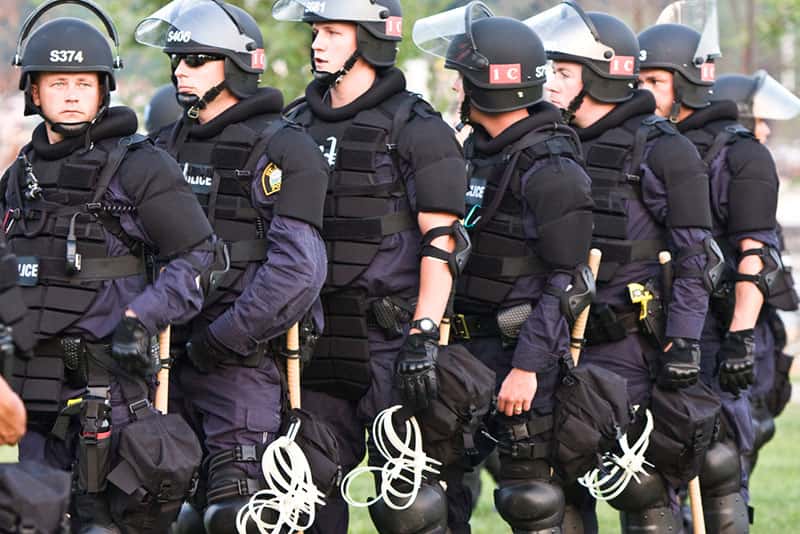 How do you get ready for a GOP convention? In Cleveland, Ohio they’re buying 2,000 sets of riot gear, and not just any riot gear. They’re ordering state-of-the-art Elite Defender Riot Suits from HWI Gear, LLC.

This sleek suit of matte-finish black body armor encases Cleveland’s finest from head to toe in a “sturdy PE protective shell for blunt force trauma protection,” is “ergonomically built to allow for a full range of motion,” and comes with a stylish matching polyester carry bag.

Cleveland.Comexplains that the funding comes from a $50 million federal grant to offset the city’s security costs. And it’s a danged good thing because preparations for the GOP convention are starting to look an awful lot like the construction of an immense fortress.

The city also has sought to rent about three miles of interlocking steel barriers, each 3.5 feet high, and buy another 3,250 feet of interlocking barriers that each would be 6.5 feet tall for the RNC [Republican National Convention], according to bid documents.

50,000 mean, angry white people are expected to converge on the Rock and Roll Capitol of the World for the GOP Convention on July 18-21. In addition, a non-partisan hosting committee has pledged to raise  $64 million help cover costs.

But will the city’s police force be ready? Fox 8 reports Steve Loomis, president of the local Police Patrolmen’s Association, has some serious doubts. For starters, he tells reporters that GOP conventions tend to be more violent than other events: Why am I not surprised?

“They’re violent. I mean, we get a lot of — RNC’s tend to be a lot more troublesome for the police departments […] And we need to be prepared for it. I mean, the best thing you can do is prepare for the worst and hope for the best.”

The GOP convention’s just four months away, there’s a three-month turnaround for the riot gear, and they haven’t even gotten around to measuring the police officers yet. Over 100,000 protesters are expected to show up in addition to the 50,000 RNC-goers, and — as if Steve Loomis doesn’t have enough to worry about — basic logistics for things like drinking water and bathrooms still need to be worked out.

As for the Democrats, they’re in much better shape than the Republicans. They’re holding their convention the week of July 25 in Philadelphia, which already has a good infrastructure and solid logistics in place. It’s a walkable city with good public transportation, plenty of hotels, enough parking, and a large convention center. Plus, they just hosted Pope Francis and his estimated 140,000 visitors in September so they’re ready to roll. This may be one of the few good decisions Democratic National Committee (DNC) Chair Debbie Wasserman-Schultz has made during this election cycle.