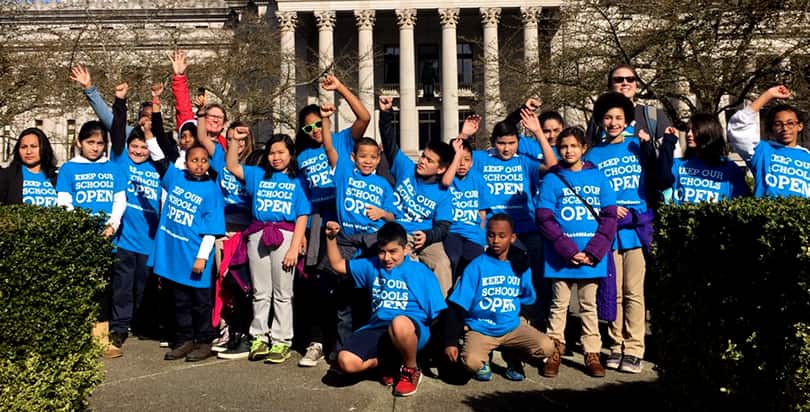 Washington finally called out the charter school movement for what it is — a colossal rip-off of public education funds.

The decision wasn’t even close. The ruling was 6-3 that privately run schools cannot be publicly funded.

It’s Kim Mead, president of the Washington Education Association, who put the ridiculousness of the movement into perspective. Mead said:

“The Supreme Court has affirmed what we’ve said all along – charter schools steal money from our existing classrooms, and voters have no say in how these charter schools spend taxpayer funding.

Instead of diverting taxpayer dollars to unaccountable charter schools, it’s time for the Legislature to fully fund K-12 public schools so that all of Washington’s children get the quality education the Constitution guarantees them.”

Washington was a latecomer to charter school educations, the 42nd state to adopt such a system. The system was narrowly approved by voters in 2012, after previously failing at the polls. A coalition of groups representing educators and voters immediately sued the state to stop the measure in its tracks.

School May Not Start For 1,000 Students

Only one charter school was in operation in the state last year, but eight more are scheduled to open after Labor Day. That now seems like an impossibility unless the schools can come up alternative funding. That casts adrift almost 1,000 kids who were to start at charter schools next week — unless, of course, they return to the public school system.

The state Supreme Court seems to be losing patience with the state legislature and its unwillingness to invest in education. In August, the court fined the state $100,000 a day for its failure to adequately fund basic K-12 public education. This follows a finding in 2012 that the legislature wasn’t fulfilling its constitutional duty to finance education. The fine was intended to prod lawmakers into action.

It’s no secret that Republican legislatures have put public education under assault, underfunding schools and allowing what resources there are to flow into the pockets of entrepreneurs. Evidence is growing of a pushback from educators and voters who are willing to sue over the issue.

In June, Colorado’s Supreme Court also ruled that the use of public money for private schools is unconstitutional. In that case, affluent parents used a voucher program to appropriate taxpayer money and send their kids to religious schools. Again, those schools had no accountability to voters.

The decision in Washington caught charter school administrators unaware, even though part of the law was struck down almost two years ago. In 2013, a county superior court judge already declared that charter schools weren’t eligible for state construction money.

“We were not expecting a ruling as deeply disappointing as this one.”

In the current political environment, private businesses aren’t used to being brought up short in their quest for profits. While some expressed concern for the students who will probably have to develop a Plan B now that their schools may not open, the decision is a victory for educators and the vast majority of children in the state.

Kudos to the state supreme court for nipping Washington’s growing charter school movement in the bud. Now, could lawmakers please get serious about educating everyone else?

Is Bernie Sanders Going To Be ‘Obama 2.0’ For Hillary Clinton?