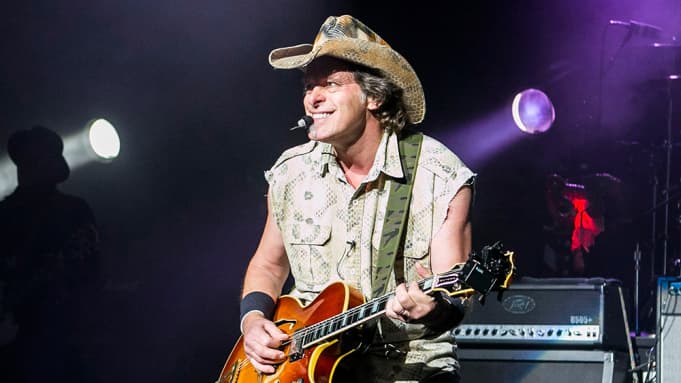 The cringe-worthy “romance” between ex-rocker Ted Nugent and former VP candidate Sarah Palin continues to smolder, and the novel should be titled Fifty Shades of EWWWW!

Nugent paid homage to his “hero,” Caribou Barbie, in a recent radio interview stating, “Sarah Palin is the perfect example of what our founding fathers envisioned for an experiment in self-government.” Nugent further stated to host, Lars Larson, “Mother housewife Wiseau Alaska, taking care of business.” (A brief aside for wingnut translation: this writer believes that Teddy was referencing Wasilla, Alaska.) Nugent has been spending inordinate amounts of time with Sarah; incoherence may be contagious. However, Ted, despite his moony-eyed state of consciousness, chose the extremely appropriate word, “experiment,” in his poetic ode to ex-governor Palin. Instantly, visions of Victor Frankenstein’s laboratory flood the imagination. A bespectacled shrieking bride rises, as a doddering John McCain gleefully shouts, “It’s alive!”

Nugent continued with his demonstration of hoof-in-mouth syndrome, insinuating that voters elected Barack Obama because they wanted to see a Black president instead of a “qualified” candidate. Ever faithful to his Sarah, Nugent opined that Sarah’s resignation as governor of Alaska was an act of supreme self-sacrifice; a response to the horde of litigious liberals laying siege to the distressed conservative damsel. Nugent stated, “She did the most courageous thing in the world, and she handed her governor duties to the lieutenant governor while she was taking on this hate onslaught of the left,” Nugent told Larson. “So that Alaska would be properly served by someone who could pay attention to the responsibilities of the office of government while she was fighting off the leftist mongrels.” Ted needs to find a new derogatory term. He flung the epithet “mongrel” at President Obama last year. Nugent later apologized for the use of this word under pressure from the criticism he received. Your racist tendencies are showing once again, Teddy.

Nugent happily plugged Sarah’s reality show and their television collaboration, expostulating “She’s a reminder that the heart and soul of working hard, playing hard, being the best that you can be in America is alive and well.”

Time for Sarah and Ted to admit what the rest of us already know: they are the modern day Romeo and Juliet a romance-starved conservative base has been longing for. A power couple unparalleled in the annals of fringe love stories. Conservative audiences just can’t get enough of the love birds huntin’ and fishin’; exchanging personalized firearms and swapping recipes for fried raccoon.