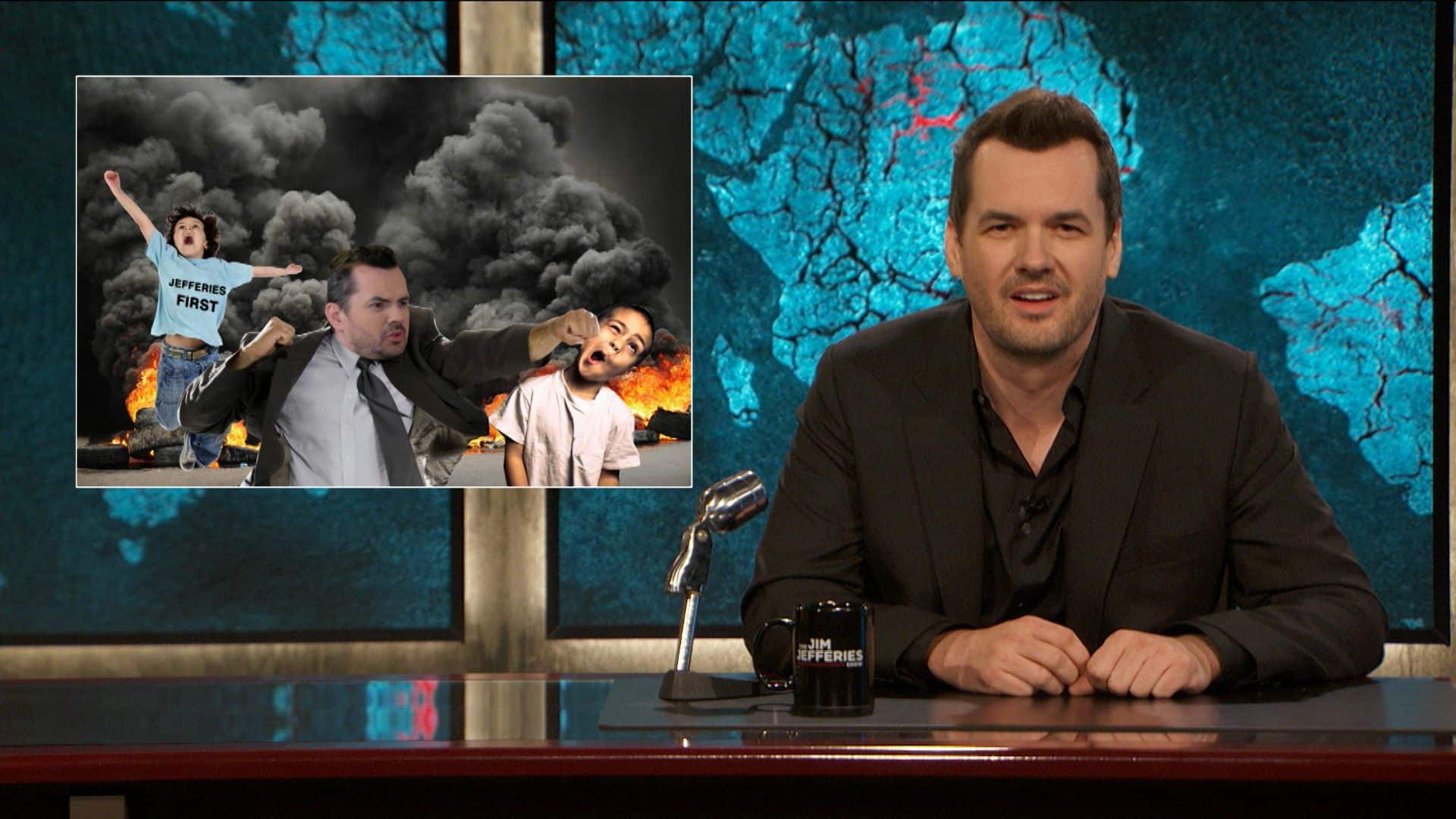 Unless you’re a die-hard fan of edgy stand-up comics like me, chances are the name “Jim Jefferies” isn’t one you’re all too familiar with, unless of course you saw his incredible routine on gun control back when it was going viral. Jim Jefferies belongs to a club of comics with the likes of Patton Oswalt, Sarah Silverman, Jim Norton, and Louis C.K. who get on stage and say whatever they feel like saying, your personal feelings be damned. And that’s why in my mind he’s one of the best comics working today.

So naturally, when Comedy Central announced that Jefferies would be getting his own half-hour TV show this summer, I was absolutely giddy. And seeing as how I’m writing an article about it, it’s safe to assume that his new show doesn’t disappoint.

“The Jim Jefferies Show,” which airs Tuesday evenings at 10:30 PM EST, is beautifully reminiscent of the Daily Show of yesteryear, back when Jon Stewart brought in church choirs to sing “Go fuck yourself” to Fox News in epic — dare I even say, biblical — fashion. Better still, the show manages to infuse the biting flavor of The Colbert Report, blending it all together to create what is quite frankly one of the funniest shows on Comedy Central today, rivaling pound-for-pound the comedic throughput of The Daily Show itself. Seriously.

The Australian-born Jefferies has absolutely no filter. He doesn’t tiptoe around subjects and he doesn’t sugarcoat anything for his audience. His comedy is visceral, unapologetic, and even brutal, but all the while he manages to keep the show inviting and endearing, like hearing a three-year old innocently dropping F-bombs. You know it’s wrong. You know someone should intervene. But come on… that shit is hilarious, and also strangely adorable.

The icing on this comedy cake? Jim Jefferies manages to make perfectly valid arguments on a consistent basis throughout each episode. For instance, in his June 20th episode (video), Jefferies discusses the so called “Fame-to-blame ratio,” where a person’s culpability for their crimes is based on how talented and beloved they are. That ratio is why Bill Cosby evaded justice for date rape, while “Subway” Jared Fogle — a figure with no talent and no truly loyal fan base — was sent to prison.

One anomaly Jefferies is quick to point out regarding his theory is that of right-wing fringe lunatic and  so-called “musician” Ted Nugent, who evaded jail time for alleged pedophilia, despite being utterly talentless.

“Here’s some facts about [Ted] Nugent. He loves guns. He called President Obama a ‘half-breed mongrel’ and told him to quote, ‘suck on my machine gun.’ He became legal guardian of a 17-year old girl so he could have sex with her. And one of his biggest hits was a little ditty called ‘Jail-bait,’ which includes the lyrics ‘Well I don’t care if you’re just thirteen. You look too good to be true. I just know that you’re probably clean.’ What a catchy little jingle!

In Jim Jefferies, Comedy Central Finally Has A Solid Replacement For Stephen Colbert In The 11:30 Slot

Since Stephen Colbert left Comedy Central to take over The Late Show following David Letterman’s retirement, the network’s 11:30 PM slot following The Daily Show has been in trouble. As much as I enjoyed Larry Wilmore’s Nightly Show, the program failed to attract solid ratings and always sort of felt like they were continuously working out the kinks of their program even after having been on the air for months.

Even just three episodes in, the Jim Jefferies Show seems to have worked through those birthing issues and is firing on all cylinders, from Jefferies’ opening the show by diving right into the news straight through the hilarious weekly cameos of thus-far show regular Brad Pitt, who plays a drub weatherman with a brutal prediction of global weather thanks to climate change, The Jim Jefferies Show has consistently fine-tuned their quality week after week.

Even this early on, it’s pretty obvious that Comedy Central could have a real hit on their hands if they’d market Jefferies’ show better. And quite honestly, I’d like to see the show moved into the 11:30 block following The Daily Show as a nightly replacement for Colbert.

Chris Hardwick’s Internet-themed game show @Midnight, another of my favorites, could be bumped back to the time slot of its namesake at 12 am, with The President Show (another Comedy Central program everyone should be watching) moving into Jefferies’ current time slot on Tuesday or Thursday nights. This would free up the Jim Jefferies Show for the 11:30 pm EST time slot following The Daily Show each night.

There you go, Comedy Central, I just handled your scheduling issues for you. Now where’s my cookie?