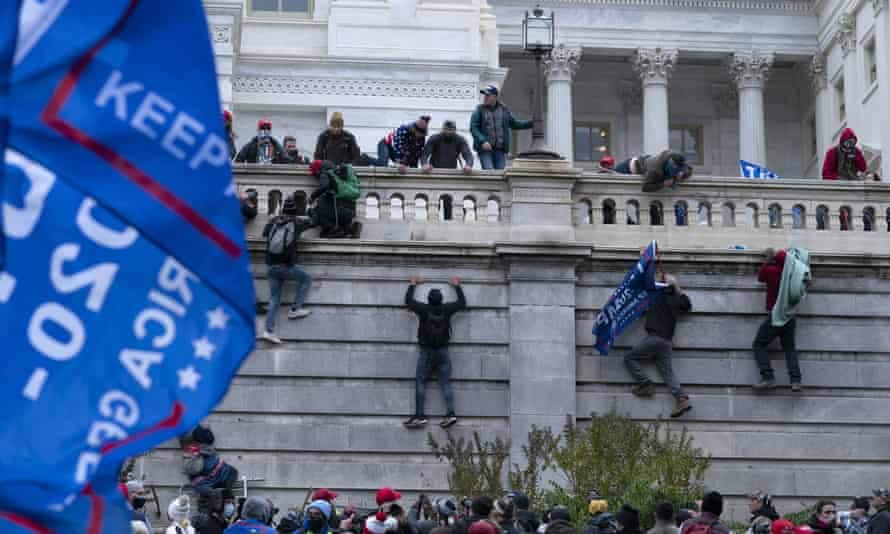 I recently argued for treating all mass shooters and bombers as terroristic threats. Now I’ll explain how the GOP ratchets up the threat level through a process called stochastic terrorism.

As we mourn the victims of the latest mass shooting, we can also clearly see a pattern: The shooters (or sometimes bombers) nearly always turn out to be white males with right-wing political leanings, and the media nearly always describes them as “insane” or as “disturbed loners.” Philly Mayor Michael Nutter and others view these attacks as looming terroristic threats, but — because the killers often lack formal ties with extremist groups — we often don’t want to call them “terrorists” because we’re still struggling to describe what has grown more and more obvious.

Luckily for us, someone has already coined the term we’re looking for: “stochastic terrorism.”  G2Geek came up with it on Daily Kos back in 2011 in response to the Tucson shooting that left Rep. Gabrielle Giffords (D-Ariz.) with a severe brain injury that cut her term short.

Stochastic terrorism is the use of mass communications to stir up random lone wolves to carry out violent or terrorist acts that are statistically predictable but individually unpredictable.

To further clarify, G2Geek later updated his post to explain that the stochastic terrorists aren’t the ones who pose the actual terroristic threats. No, they’re the ones who use their access to the media to broadcast extreme views that inspire “disturbed loners” like Dylann Roof and Robert Lewis Dear to attack. In his post, G2Geek specifically calls out hate-mongering people on Fox “News” like Sean Hannity and Bill O’Reilly. Now, GOP officials, lawmakers and 2016 presidential candidates have likewise come under fire  for their over-the-top, insane and hateful rantings about immigrants, gays, Planned Parenthood, blacks, and Muslims.

And now,Valerie Tarico, a psychologist and writer from Seattle, Wash., further breaks down how the process works and declares it “perversely brilliant.”

(1) A public figure with access to the airwaves or pulpit demonizes a person or group of persons.
(2) With repetition, the targeted person or group is gradually dehumanized, depicted as loathsome and dangerous—arousing a combustible combination of fear and moral disgust.
(3) Violent images and metaphors, jokes about violence, analogies to past “purges” against reviled groups, use of righteous religious language—all of these typically stop just short of an explicit call to arms.
(4) When violence erupts, the public figures who have incited the violence condemn it—claiming no one could possibly have foreseen the “tragedy.”

She adds that stochastic terrorism is not a “fringe concept”: The FBI issued warnings about right-wing, anti-choice attacks on Planned Parenthood clinics months before the one in Colorado Springs, Colo. happened.

Stochastic terrorism is not a fringe concept. It is a terrorist modality that has been described at length by analysts. It produces terrorism patterns that should be known to any member of Congress or any presidential candidate who has ever thought deeply about national or domestic security issues, which one might hope, is all of them.

The term “stochastic terrorism” derives from the word “stochastic,” a term borrowed from folks who study probability theory. It explains how we know certain events are likely to happen — like mass shootings and other terroristic threats by “lone wolf” actors — but we don’t know where or when, because the variables (i.e. the people who do the killing) are random and unpredictable.

The GOP’s Terrifying Strategy For Stochastic Terrorism, In Five Steps.

1. Create a failed state: Convince people the government doesn’t work, then defund vital programs and functions so it can’t work. Refuse to fund anything except for police, the military, “the war on terror,” and tax cuts for the rich. Get people elected who block critical bills from getting passed so voters get angry and frustrated and feel government won’t respond to them. Threaten to shut down the U.S. government so you can slash spending on programs most of us support. Egg on all those tin foil hat-wearing survivalists and self-proclaimed “sovereign citizens” by claiming the Feds are tyrants who have no authority over them. Let white folks like Cliven Bundy get away with flouting the law and putting rangers’ and federal agents’ lives in danger. Proclaim laws, court decisions, and even presidents illegitimate when you don’t agree with them. Do everything possible to keep us from voting them out…Or from voting at all.

Republicans know we can’t fight the right-wing terrorism they foment if they de-fund the agencies that can prove it exists.

2. Incite rage and hate: Openly spewing hate towards immigrants, LGBT individuals, women, people of color, non-Christians, and others used to be the domain of right-wing nut jobs (RWNJs). Now, we’ve got leading GOP presidential hopefuls for 2016 airing these views on national TV, and the party’s leaders do nothing to stop it. Since the 1970s, the GOP has employed a “Southern Strategy” to exploit racism and to encourage downwardly mobile white folks to place the blame on people of color for their economic woes, instead of where it belongs: On our nation’s political and corporate elites. Most folks in the Republican party used to at least keep their bigotry under the radar by cloaking it in thinly veiled terms referred to as “dog whistles.” Now, right-wingers boldly bring their hate into the open as they vilify entire groups of people as lazy, sinful, lawless, violent, thuggish, rapey, terroristic, grasping, and/or un-American.

3. Arm would-be terrorists: Once you get people scared and riled up, all you need to do is arm your potential terrorist threats to the gills, without looking like you’re trying to create an army of brown shirts. Glorify gun culture. Proclaim the sanctity of our God-given Second Amendment rights. Refuse to enact tougher gun safety laws, or even close loopholes for the few we’ve got, so unstable people like Aurora, Colo. shooter James Holmes can buy guns and other weapons online, at gun shows, or through private sales. Allow open carry “activists” to roam the streets with rifles slung over their shoulders. Say nothing when one of those “open carry” gun lovers turns out to be a mass shooter.

4. Lie and deny: When the GOP’s stochastic terrorists are deployed in the form of yet another angry white man with a gun or a bomb, and the next tragic round of mass murders takes place, the hateful merchants of death take refuge in their fortress of plausible deniability. Wring your hands, pray to the Lord, and lament the tragedy as though these acts of terrorism on your behalf are acts of God or some kind of natural disaster. Cry crocodile tears as you express sorrow and offer condolences. Claim the perpetrator is mentally ill, but propose no programs to help people who suffer from mental illness. Insist that our perverse and violent form of gun culture has nothing to do with gun violence. Blame it all on non-Christian media like TV, fiction, movies, music and video games — which most of us know are only entertainment — while having “experts,” lawmakers and other public figures push false and dangerous narratives on TV news shows, which most of us do see as authoritative and believable.

5. Cover up: Republicans know we can’t fight the right-wing terrorism they foment if they de-fund the agencies that can prove it exists. Daryl Johnson, an expert on counter terrorism, used to work for the Dept. of Homeland Security, but not any more. Wired reports he published a paper on domestic terrorism and the rise of right-wing extremism in 2009, and that was the end of his career with DHS. Republicans in Congress raised a ruckus and claimed DHS was trying to criminalize “free speech” on the far right. As of 2012, the department Johnson once ran consisted of only one person to keep up with all non-Islamic terroristic threats. The GOP members of Congress have also banned funding for the Centers for Disease Control’s research on gun violence, as reported by The Hilland only a handful of other news outlets. A furious Rep. Nita Lowey’s (D-N.Y.) — whose GOP colleagues in the House Appropriations Committee refused to add her amendment to restore funding to a health, education and labor bill — fumed:

“When it comes to gun violence, my friends, this committee won’t give one dime for the CDC to conduct research on something that is killing Americans by the thousands,”

How can we even begin to address the threats of right-wing terrorism and gun safety to our nation’s safety  and public threat when the agencies charged with those tasks are denied any funding or support for doing their jobs?

How Do We Fight Stochastic Terrorism? What About Free Speech?

How do we fight the terroristic threat posed by stochastic terrorism? That’s a tough question: David Hill, a blogger, tries to answer it, but comes up empty. Can we indict David Daleiden (the man whose shady anti-choice group produced the “baby parts” hoax videos) and Carly Fiorina (who defends and embellishes on the videos) as accessories to Robert Lewis Dear’s rampage on Planned Parenthood. Legally, that’s tough to prove and a slippery slope. What about simply calling out the stochastic terrorists and shaming them? We’ve tried that, and it doesn’t work. Plus, Hill mentions, our options are limited by our First Amendment right to free speech.

Well, guess what? I disagree. While pressing charges against stochastic terrorists may require too high of a burden of proof, victims or their families can pursue civil lawsuits.As for the U.S. Constitution and our right to free speech, we need to also  recall U.S. Supreme Court Judge Oliver Wendell Holmes’ landmark ruling for Schenck v. United States way back in 1919. To quickly paraphrase him: Freedom of speech does not give us the right to falsely shout “FIRE!” in a crowded movie theater, or otherwise endanger the lives of others. Hill and others also keep bringing up Black Lives Matter, Occupy Wall Street, and public figures like Sens. Bernie Sanders and Elizabeth who support these movements. But there’s a huge difference between demonizing police officers, bankers and CEOs and demanding laws and social change to ensure that our criminal justice and economic systems protect and treat all of us fairly.

One way to prevent would-be stochastic terrorists from getting the upper hand in our public discourse would be to restore and enforce the FCC’s Fairness Doctrine. Before President Ronald Reagan’s administration ditched it in 1987, TV news broadcasts were required to give both sides of the issues equal time. In addition, we could require TV news shows to inform viewers when their guests spew lies instead of facts. Reagan repealed the Fairness Doctrine by executive order, so President Barack Obama should be able to restore it.