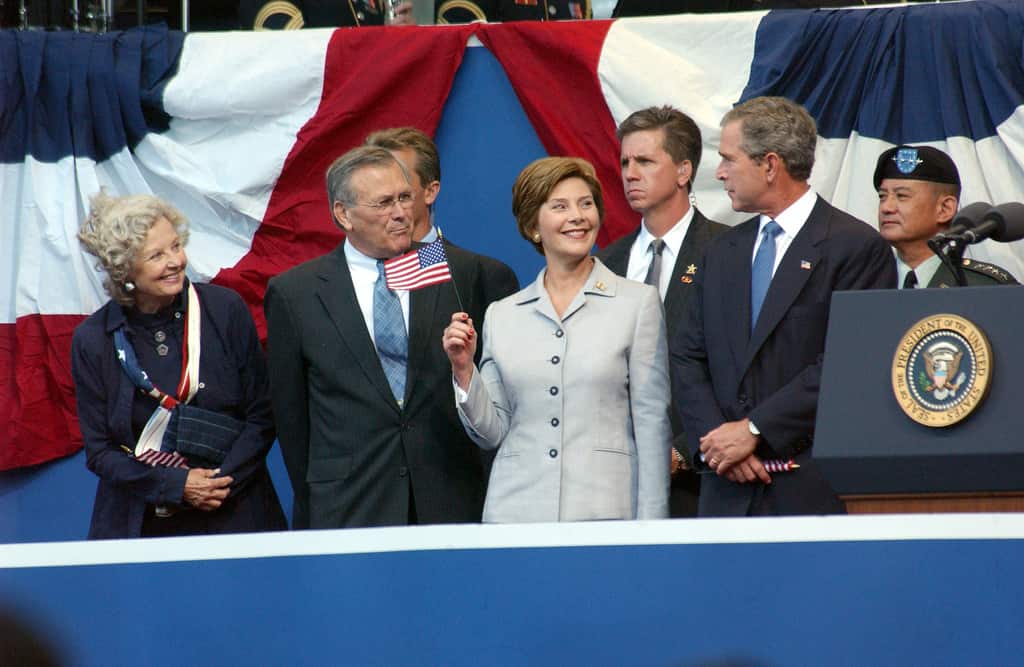 In late 2002 and early 2003, American involvement in the war in Afghanistan would go on for another dozen years but already that war was losing its prominence in the headlines, so President Bush, Dick Cheney and the hawks on the right began the process of selling us all on the war they really wanted, Iraq. It was a matter of national security. It was an immediate threat. Iraq was amassing an arsenal of weapons of mass destruction that threatened our way of life. It was a slam dunk. It was a lie.

On an almost daily basis, members of the Bush administration came before us with a mountain of information detailing Saddam Hussein’s WMD program that could only be dealt with by invading the country and toppling his regime. To make their case, the administration and its allies cited the 2002 National Intelligence Estimate (NIE), a 93 page report that compiled all the intelligence available, along with expert opinions and interpretations. We later found out that, while what they were saying did come from the report, they were often leaving out important, if not critical information, information that significantly changes the picture being drawn. What they left out was all the uncertainty and condition that ran through every page of the report like chocolate sauce through a half gallon of fudge ripple ice cream.

In 2004, the CIA released the report as the result of a Freedom of Information Act request, but it was so heavily redacted as to be almost meaningless. In 2006, Congress went back through the information that had been available in the run up to the war and concluded that the administration had “overstated” the case. Until now though, the general public has had to take them on their word just what that means. A new FOIA request from John Greenewald at The Black Vault has resulted in the CIA releasing a new, much cleaner version of the report.

Coming on the heels of the 9/11 attacks, it was important that Al Qaeda be kept at the top of our priority list. So, the administration went to great lengths tying Saddam Hussein to the terrorist group, National Security Advisor, Condoleeza Rice, White House Press Secretary, Ari Fleischer and others made the connection and then Defense Secretary Donald Rumsfeld came out and told us they had “Bulletproof” information linking the two.

“We do have solid evidence of the presence in Iraq of Al Qaeda members, including some that have been in Baghdad. We have what we consider to be very reliable reporting of senior-level contacts going back a decade, and of possible chemical- and biological-agent training.”

Now, however, we can look to see what the actual NIE had to say on the subject.

“As with much of the information on the overall relationship, details on training and support are second-hand. The presence of al-Qa’ida militants in Iraq poses many questions. We do not know to what extent Baghdad may be actively complicit in this use of its territory for safehaven and transit.”

That’s a long way from bulletproof. Sounds like they had more questions than answers. Even at that, the declassified NIE says much of their information came from questionable sources like prisoners who’d been tortured. One such prisoner was Ibn Al-Shaykh Al-Libi who later recanted saying he told the interrogators what he thought they wanted to hear.

His change of heart points up the inherent problem with enhanced interrogations as the administration called them. It’s not that you don’t get information from it, you invariably do, but that you get so much bad information you can’t weed out the good.

On October 7th, 2002, George Bush gave a speech detailing the need and justification for unilateral action to disarm Saddam and remove him from power. In it he said,

“The Iraqi regime has violated all of those obligations. It possesses and produces chemical and biological weapons.”

But the NIE said Saddam-

“The evidence indicates that Iraq is reconstituting its nuclear weapons program. Saddam Hussein has held numerous meetings with Iraqi nuclear scientists, a group he calls his “nuclear mujahedeen” — his nuclear holy warriors. Satellite photographs reveal that Iraq is rebuilding facilities at sites that have been part of its nuclear program in the past.”

But the NIE doesn’t back this up, either.

“the information we have on Iraqi nuclear personnel does not appear consistent with a coherent effort to reconstitute a nuclear weapons program.”

Bush then went on to make what is possibly the most thoroughly debunked WMD claim of all.

“Iraq has attempted to purchase high-strength aluminum tubes and other equipment needed for gas centrifuges, which are used to enrich uranium for nuclear weapons.”

“only really suited for nuclear weapons programs. We don’t want the smoking gun to be a mushroom cloud.”

When the first redacted version of the NIE was released in 2004, all references to the aluminum tubes were absent, but the newly declassified version makes no such omission. Saying, the intelligence community was unsure why-

“Saddam is personally interested in the procurement of aluminum tubes.” The US Department of Energy concluded that the dimensions of the aluminum tubes were “consistent with applications to rocket motors” and “this is the more likely end use.”

This completely contradicts Rice’s statement, but the mushroom cloud comment was regurgitated constantly throughout the media and especially on the right wing outlets to the point where Americans were convinced the administration knew beyond doubt that Iraq was on the verge of creating a nuclear weapon.

Within six months of the invasion we knew they were wrong about all of that, the Al Quaeda connection, the biological weapons, the chemical weapons, the nukes, everything. But the administration clung to deniability. They blamed flawed intelligence. It was unfortunate, but mistakes were made.

When Dick Cheney said Saddam had weapons of mass destruction. That was wrong. But he also said there was no doubt. But there was doubt, and he knew it, and that makes it a lie. When they said the aluminum tubes were for refining uranium, they were wrong. When they said the tubes could only be used for that purpose, that was a lie. And they knew it. When Donald Rumsfeld said it was bulletproof, that was a lie and he knew it. Every time they knowingly left out a qualification or a piece of intelligence that shed doubt, and told us they were certain, they were lying. Now we know it for fact.