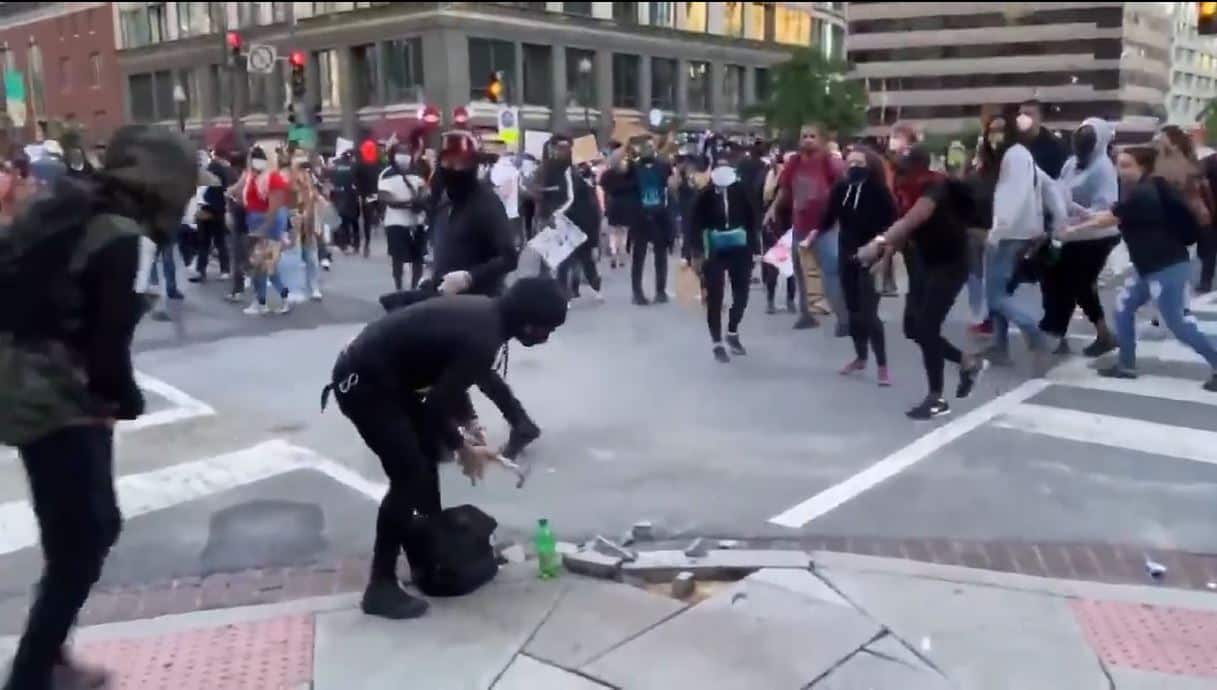 Since gathering in groups to use our right to free speech is perfectly legal, why do police infiltrate protest movements with undercover cops? Why not simply police these events in uniform?

Maybe it’s because police officers — or at least their police chiefs — are inclined to destroy all protest movements, no matter how peaceful or just they are.  Seen through that lens, undercover cops are just another tool — along with police departments’ assault weapons, body armor, and SWAT vehicles — to force our compliance.

Alas, for some folks, all demands for justice pose a threat, whether you’re from No KXL or from Al Qaeda. No wonder police approach the Occupy and #BlackLivesMatter movements the same way they approach crime rings and terrorist cells: With bullets, tear gas, and infiltration by undercover cops.

How can undercover cops destroy a protest movement? In an entry on agent provocateurs, Wikipedia explains that options for these cops include: causing drama to sow discord, inciting protesters to acts that are violent and/or not legal (though framing them or setting them up works just as well), and publicly sharing information in a way that makes a protest movement look less credible.

How Undercover Cops Hollowed Out The Occupy Movement.

When the Occupy Wall Street movement launched in October, 2011 with protesters literally occupying Zuccotti Park in New York City’s financial district, many of us felt sympathy. After all, millions of Americans had lost their jobs and homes due to the bubble Wall Street created, and received no help. Meanwhile, the banks got a huge, taxpayer-funded bailout.

Over the next few months, the Occupy movement had raised public awareness about income inequality, and completely changed the public debate on economic issues. For the first time in 30 years, Americans began to ask whether supply-side economics and “trickle-down” can work for anyone but the one percent.

Fast forward two years later: While we’ve made some gains in addressing income inequality — including minimum wage hikes in cities and states across the country — nobody seems to talk about about the Occupy movement any more. Why? The big news outlets insist Occupy flat lined because the movement splintered and grew disorganized.

In fact, The Daily Beast, CNN Money, Huffington Post, The New York Times , Time, and USA Today all ran articles about why the Occupy movement “fizzled.”

But that wasn’t really what happened.

Truthoutreports on how undercover cops arrived at Zuccotti Park on day one, and also wormed their way into Occupy movements in cities across the nation, including  Los Angeles, Washington, DC, Nashville, and Oakland.

In New York City, Occupy activist Marshall Garrett told The Village Voice about how undercover cops came and acted “disruptive” and “loud” during an action at Citibank to make the the protesters look bad:

“But what was unknown to us and to a lot of people that day, including those in Times Square, was that there were undercover cops already there, paid to be disruptive and to be loud. One undercover cop present [at Citi] was louder than the entire group.”

And despite the protesters’ carefully laid out plans to comply with the law, avoid ticking off Citibank’s workers and customers, and to keep an eye on the exits, they found themselves trapped and outwitted at every turn.

“It was a bit startling how inside their information was – how they were being paid to go to these protests and put us in situations where we’d be arrested and not be able to leave.”

That’s right. The police and bank security guards told the protesters to leave, blocked the exits when they tried to comply, and then hauled them off to jail for not leaving.

“Yeah, the bank security, along with the undercover officer, pushed us back and locked the doors. They would not allow us to leave, which is illegal, and said the cops are on the way and you are all arrested.”

So how did Garrett figure out which so-called “protester” was the undercover cop? Oh, he was the one slamming a fellow protester into a wall.

“He arrested one of the protestors outside, and slammed her into the wall, and pushed her back into the bank. We all saw him at the precinct with us. He was laughing with the fellow white shirt cops, telling them about what we’d been saying.”

Meanwhile on the Left Coast, Oakland, CA’s Acting Chief of Police Howard Jordan also had plans to embed undercover cops into his city’s growing Occupy movement, and Jacob Crawford from We Cop Watch — a nonprofit watch dog group — caught him talking about it on tape.

In the chilling audio, Jordan claimed that since San Francisco, Seattle, and other big US cities infiltrate protest movements with undercover cops, so should Oakland. That way, they can get advance information, “and maybe even direct them to do something we want them to do.”

“You don’t need to have some special skill to be able to infiltrate these groups. So if you put people [undercover cops] in there from the beginning, I think we’ll be able to gather the information, and maybe even direct them to do something we want them to do.”

Think Progress reports Crawford from We Cop Watch outed Oakland Police Officer Fred Shavies as an undercover cop within the Occupy movement. But in a surprise twist, Shavies denied being an infiltrator and told Crawford in a video interview that he actually strongly supports the Occupy movement, and wasn’t trying to hide who he is.

“I’m a police officer. I’m part of the 99 percent. […] In the ’60s when people would protest, would gather in order to bring about change, right? Those protests were nonviolent they were peaceful assemblies. They were broken up with dogs, hoses, sticks. […] It looks like there was a square, and police shot tear gas. That could be the photograph or the video for our generation.”

Shavies also claimed that he sees today’s fight against income inequality as the moral equivalent of the fight against racism back in the 1960s.

“That’s our Birmingham. So, twenty years from now this movement could be the turning point, the tipping point, right. It’s about time your generation stood up for something. It’s about time young people are in the streets. […] Ya’ll don’t need to throw gas canisters into a group of people occupying an intersection.”

Here’s the interview with Shavies.

But in the same piece, Think Progress warns that police were sneaking undercover cops into Occupy movements across the nation in hope of destroying them.

Earlier today, the Tennessean published excerpts from emails sent by the Tennessee Highway Patrol that confirmed not only that police were infiltrating Occupy Nashville but that they were hoping for the movement’s demise.

Countercurrent News reports Crawford and his crew at We Cop Watch have stayed vigilant in keeping a beady eye on Oakland’s finest. And sure enough — in the wake of the grand juries’ decisions to let the police officers who executed Michael Brown and Eric Garner walk free — the Oakland Police Department is already at work.

#BlackLivesMatter launched in 2012 after a jury acquitted George Zimmerman, even though he had clearly murdered Trayvon Martin in cold blood. The movement has gathered steam as daily headlines drive home the tragic fact that every 28 hours a black man, woman or child gets killed by cops — like Ferguson’s Darren Wilson and NYPD’s Daniel Pantaleo — or by “stand-your-ground” vigilantes like George Zimmerman.

During a protest on December 5th, Crawford caught Officers Michael Jaeger and George Buford posing as scruffy, hoodie-wearing protesters named “Roy” and “Devon.” In contrast with Shavies, Jaeger doubled down on his lies, pretended to take offense at being pegged as an undercover cop, and insisted he and Buford were there for “Michael Brown and Eric.” Even though — for Pete’s sake! — both men actually saw Crawford’s crowd snapping photos of them in their uniforms. Unlike Shavies with the Occupy movement, neither Jaeger nor Buford have voiced support for the #BlackLivesMatter movement.

But a quick search on the Oakland Wikia reveals that Jaeger and Buford are both listed as “community policing” officers or “problem-solving officers” — OPD’s euphemisms for “undercover cops.” To their credit, the Oakland Police Beat database shows Jaeger and Buford have won awards, gotten nice “letters of appreciation” from people, and have not been “named in any lawsuits” or been involved in any shootings. Then again, Darren Wilson once  won some kind of award, didn’t he?

Watch Crawford and other protesters call out Officers Jaeger and Buford for acting as undercover cops.

Sending undercover cops and agents to spy on protest movements is nothing new. Creepy FBI spook J. Edgar Hoover probably began doing that when he launched the FBI back in 1935… or perhaps sooner. The sad thing is how we still allow the people we hire to fight crime treat dissent as a criminal act.