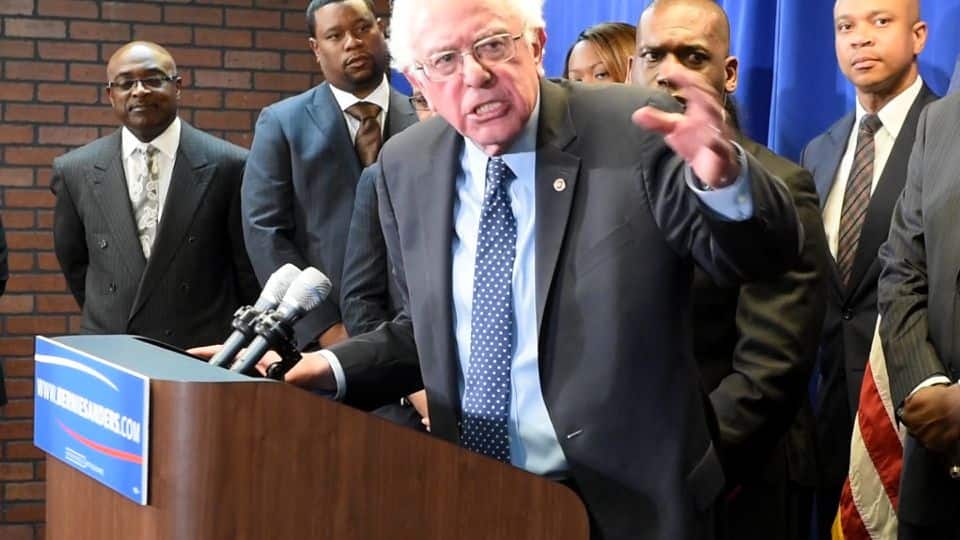 Bernie Sanders went where no presidential candidate has gone before. He went to Freddie Gray’s neighborhood in Baltimore to talk about poverty. Sanders chose that area for a number of reasons close to his heart, and integral to his campaign.

First of all, one of the officers charged with Freddie Gray’s murder is currently on trial, underscoring Sanders’ theme of racial justice. The candidate’s platform on racial justice includes eliminating violence and brutality at the hands of the police, much of which is directed at young black men like Freddie Gray. Secondly, the Sandtown-Winchester neighborhood has a poverty rate of more than 30 percent, with over 50 percent of children living in poverty-stricken homes.

Sanders walked the neighborhood. Stopping before a large mural of Freddie Gray, backed by images of marching protesters, the senator said:

“We are less than an hour away from the White House and the United States Congress. It is stunning to understand that we are the wealthiest country in the history of the world, and every year we are seeing more and more millionaires and billionaires, but in communities like this, we are seeing kids dropping out of school, living in dilapidated housing. It is time to transform our national priorities.”

When the tour was over, he told reporters:

“Anyone who took the walk that we took around this neighborhood would not think you’re in a wealthy nation. You would think that you were in a Third World country.”

But what did the single-minded press want to talk about, with boarded up storefronts and deteriorating public housing staring them in the face? ISIS. They had been asked to stick with the focus on poverty for the day. But a CNN reporter pressed on, saying:

“Do you not want to talk about ISIS?”

Shortly after, he ended the press conference.

Sanders can undeniably get testy over the issues that he cares passionately about. Other candidates can talk glowingly about issues that they don’t believe in, or have changed their positions on, but the senator is the real deal. If he says he believes something, he means it.

Theresidents of Sandtown-Winchester showed every sign that they appreciate his authenticity and his caring about people. Like Mike Williams, who said:

“I have never, ever seen a person running for president come through here. Not one time. At first, I wondered if he is just trying to get the black vote. But I did some research and found out he fought a lot for civil rights, and even marched at one time with Martin Luther King. I never knew that. And in his speeches, he says, ‘Yes, black lives do matter’.”

Or the Rev. Dr. Jamal Bryant, of Empowerment Temple Church, who took Sanders through the neighborhood, and said:

“I know the senator knows numbers and statistics, but I wanted him to see this poverty firsthand. And he was blown away by it.”

Or the Rev. Donte Hickman, of the Southern Baptist Church, who called Sanders “empathetic” and “very impressive,” then added:

“I got the sense that he feels for the disfranchised and disadvantaged and is working to address our issues. We’ve got blocks and blocks of blight. We have food deserts. We have liquor stores on every corner. We have blue collar jobs leaving town.”

Or the man who yelled out, “Hey, that’s Bernie Sanders, he doesn’t have a Super PAC.” Or the one who told Sanders “We don’t want Trump.” Or the others who encouraged him to “beat Trump.”

The nation lost perspective on its priorities years ago — with George W. Bush, Dick Cheney, and the rest of the gang of war criminals egging us on, fanning the spark of our fears into a raging inferno. It isn’t ISIS that is destroying the United States; it’s the purposeful neglect pushed by conservatives.

And it isn’t just West Baltimore and other poverty-stricken communities that suffer. We all suffer as the funding for schools, roads, healthcare, and the social support network have been attacked nearly into oblivion. But it’s places like Sandtown-Winchester that suffer the most.

Bernie Sanders cares, and he shows it. He went and saw Sandtown-Winchester. He is focused on his proposals to create change — on a $1 trillion jobs program, on rebuilding our infrastructure, on expanding affordable child care that would allow parents to work, on reforms to the criminal justice system, on taking action on climate change.

What does the mainstream media want to focus on? Who cares!