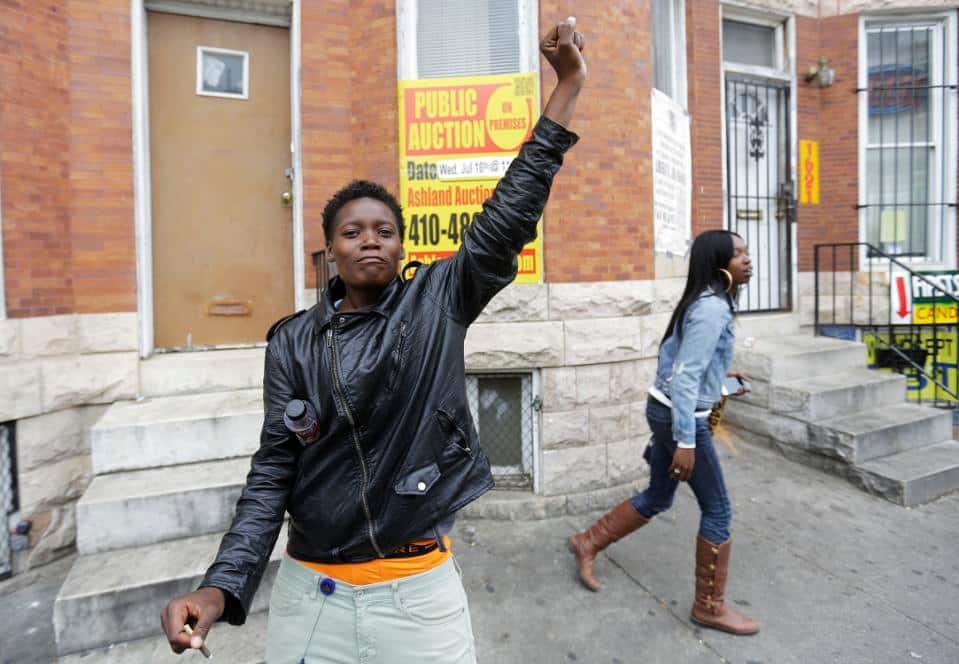 What’s worth more? A police car or a black man’s life? Baltimore protester Allen Bullock and his parents are finding out the hard way.

You may remember Bullock from the iconic photo of this young black man allegedly smashing the windows of a police car with a traffic cone to protest the murder of Freddie Gray in Baltimore. But unlike the cops who somehow managed to crush Gray’s larynx and sever his spine while giving him a “nickel ride” in the paddy wagon, Bullock showed some remorse for what he did.

The Guardian reports Bullock’s step father Maurice Hawkins talked him into turning himself in, because police would “find him, knock down our door and beat him” if he didn’t. Instead of going easy on Bullock because he’s only 18 and came voluntarily, police slapped him with eight charges and a judge set his bail for $500,000. And now Bullock’s stuck in jail indefinitely because a half million dollars is way more than Allen’s mother and step father can afford to pay.

Meanwhile, Fox 2 reports the six cops who murdered Freddie Gray were released on just $250,000 to $300,000 bail each. Deputy District Public Defender Natalie Finegar and Warren Brown, a long-time Baltimore defense attorney both informed Fox that normally, people charged with crimes that involve someone’s death are not even allowed to post bail. “For the average citizen there would be no bail,” Brown confirmed.

In a highly emotional interview with the Guardian, Hawkins surmised police were unfairly making an example of Bullock to deter future protests.

“By turning himself in he also let me know he was growing as a man and he recognized what he did was wrong. But they are making an example of him and it is not right.”

Bullock’s mother Bobbi Smallwood declared, while weeping and dabbing at the tears in her eyes:

“As parents we wanted Allen to do the right thing. He was dead wrong and he does need to be punished. But he wasn’t leading this riot. He hasn’t got that much power.”

In despair, Smallwood added that the bail was set way too high, pointing out that it was much higher than the bonds placed on police and others accused with murder in Baltimore. Plus there’s no way Bullock can pay for damaging the police car if he’s stuck in jail.

“It is just so much money. Who could afford to pay that? If they let him go he could at least save some money and pay them back for the damage he did.”

Even online fundraising options may be limited. The Washington Times reports that GoFundMe took down campaigns for both jailed protesters and the six Baltimore cops due to complaints they received.

[Update: There is a fundraiser for paying Bullock’s bail on IndieGoGo. To help, please click the link.]

[Update: Some have asked whether Bullock may have committed prior crimes that caused the judge to set his bail higher. Raw Story reports these are the first charges filed against Bullock as an adult, and reminds us that all eight charges currently filed against him are misdemeanors, not felonies. His rap sheet as a juvenile included minor offenses like “theft and fighting,” which also occurs among Anglo/white teenagers in more well-off areas who don’t wind up with permanent records. Bullock also had a  $15,600 a year job in sanitation through a city probation program and ran a car detailing business on the side. As the (Anglo/white) mother of a teenager, this writer objects to judging teens of color by the lengths of their rap sheets, knowing how volatile and lacking in judgement many teenagers tend to be, and knowing how harshly our system treats people of color.]