God, Discrimination And The Law: Say It With Flowers 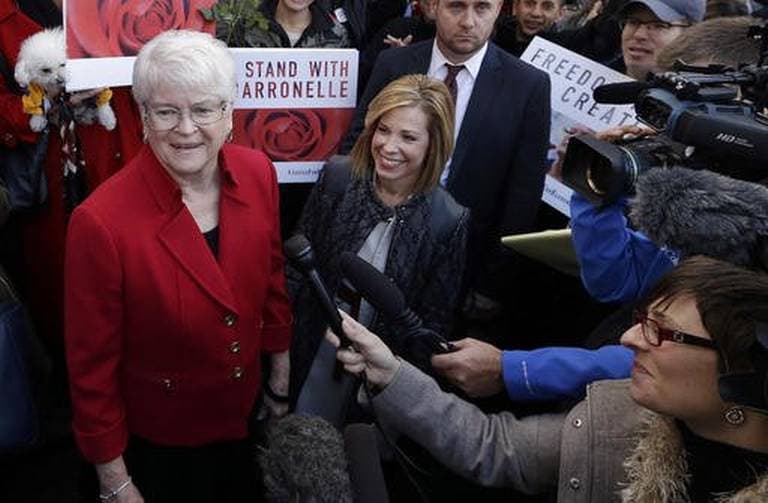 It has now become de rigueur to wrap illegal behavior in self-righteousness. It is now standard practice for some to wear their God like a get-out-of-jail-free card, the rule of law be damned. We have reached a point where we can pick-and-choose our laws according to our faith. And this is a dangerous place.

I do not think that Barronelle Stutzman, florist of Richland, WA, is a bad person. I’m sure she is honest and earnest, hard-working and a pillar of the community. But the self-righteous piety of her Washington Post op-ed is disturbing on multiple levels.

I’ve been a florist in Richmond (SIC), Wash., for more than 30 years. In that time, I’ve developed close relationships with many of my clients.
One of my favorites was Rob Ingersoll. Ingersoll came in often and we’d talk. Like me, he had an artistic eye. I’d try to create really special arrangements for him. I knew he was gay, but it didn’t matter — I enjoyed his company and his creativity.

“I knew he was gay, but it didn’t matter.” Does it matter when your straight customers come in? Mmm, y’know, I love Mary, but she’s a hetro! Why is this construction necessary?


I was raised Christian. In my religious tradition, marriage is a sacred religious ceremony between a man, a woman and Christ. It’s a covenant with the church. To participate in a wedding that violates those principles violates the core of my faith.

You are allowed your beliefs, and I encourage them. But same-sex marriage is legal in Washington State. This is the point, and we shall return to it presently.


When I told Rob, I felt terrible that I couldn’t share this day with him, as I’d shared so many with him before. I took his hands and said, “I’m sorry I can’t do your wedding because of my relationship with Jesus Christ.” Rob said he understood, and that he hoped his mom would walk him down the aisle, but he wasn’t sure. We talked about how he got engaged and why they decided to get married after all these years. He asked me for the names of other flower shops. I gave him the names of three floral artists that I knew would do a good job, because I knew he would want something very special. We hugged and he left.

Gee, it’s swell that you’re looking after your friend, since your commitment to breaking the law is more important than your friendship.

I never imagined what would happen next. Washington State Attorney General Bob Ferguson sued me after hearing in the media what had happened. That was shocking. Even more surprising, Rob and his partner Curt, with their ACLU attorneys, filed suit shortly thereafter. A judge ruled against me, but this week, with the help of the Alliance Defending Freedom, I appealed.

You never imagined what happened next? Apparently. There are consequences to picking-and-choosing which laws to follow. Sucks when it hits home, doesn’t it?


We’ve always heard that same-sex marriage would never affect anyone aside from the same-sex couples who wanted to be married. But a judge recently told me that my freedom to live and work according to my beliefs about marriage expired the day same-sex marriage became the law in my state.

This isn’t about bigotry. I’ve had gay and lesbian employees and friends. And it’s important to remember that Rob was a long-time customer and friend despite our different beliefs about marriage. When I had to refer him for this one event, I did everything I could to avoid hurting his feelings and I believed we would remain friends when he left the shop. He got enough offers after this situation became public to do about 20 weddings.

Oh Christ, not the “I’m not a bigot! I have a gay friend!” codswollop again. You may not be a bigot, but your behavior is most certainly bigoted. Intention tells. And is this how you treat all your friends? Make them feel like second-class shit in their own home town?


In Washington, Rob and Curt have the right to get a marriage license. But that doesn’t mean that the state should be able to force people in the creative professions like myself to create expression celebrating the ceremonies.


But whatever the state says and however they want to try to punish me, they can’t change my faith.

Ah, I can see those windmills tilting now!

So, what do we have at the end of this screed? A florist who violated the law of her state.

Why is that so hard to grasp? It’s not about religious persecution, it’s about violating the law. In spite of what Mike Huckabee thinks, God’s law does NOT trump the law of the land, nor of the states, and you have no right to play eenie-meenie with which laws you choose to follow based on your faith.

Worship however you want. But you can’t live according to whatever law you want. That is a dangerous precedent, one we should not experiment with in this country.