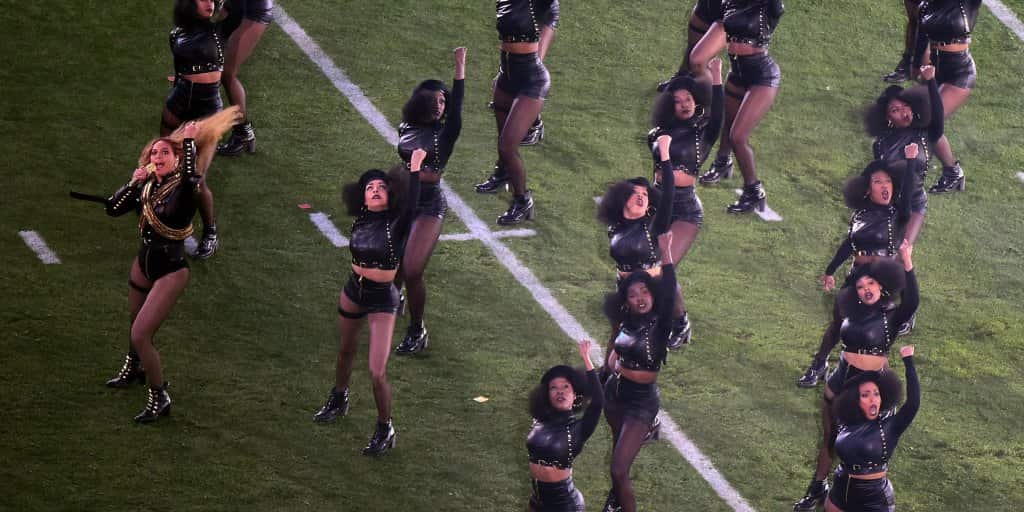 You Think The Beyonce Half-Time Show Was “Racist?” Seriously?

The amount of stupid that can tumble ragingly out of the Internet has a deafening roar that can leave you wishing asteroids were emotional and paid attention to the same things you do. That sums up my reaction to the latest “controversy” swirling through social media, this one involving Beyoncé, Black Panthers, and a sport I’ve never enjoyed.

On Sunday, pop music icon Beyoncé Knowles performed in the Super Bowl’s half-time show, along with Coldplay and Bruno Mars. During her set, a gaggle of dancers donned the black berets symbolic of the Black Panther movement of yesteryear, and threw their right fists up. From there, it didn’t take long for the Internet’s white, right-leaning denizens to label the performance as “racism.”

Some people — stupid people —  likened the Black Panthers to the KKK (just as many have done to #BlackLivesMatter). Others claimed Beyoncé was trying to incite a race war. One person I spoke with on Monday claimed “Beyoncé would’ve been shaking her ass differently if a bunch of skinheads were getting down with her up there.” One thing is definitely clear: the Internet has no shortage of ignorant assholes.

The Black Panthers Didn’t Do What You Thought They Did.

The people churning the Beyoncé controversy think of the Black Panthers as a radical hate group who went out of their way to attack white people at any opportunity afforded to them. This is where the thread of stupidity begins… the Black Panthers didn’t do what you thought they did, dummies.

The whole idea of the Black Panther movement was simple: they wanted to legally arm the black community and teach them how to defend themselves against the violence whites exposed them to on a daily basis, while rallying said community together in an act of self-preservation. They fought to end police brutality and provide blacks with the same opportunities for education, employment, housing, and justice that were afforded to whites. In many ways, they have a lot in common with today’s #BlackLivesMatter movement (shy of the guns and patrols, that is).

My mom is black, grew up in the 1960’s, and interacted with (but was never a member of) the Black Panthers. She told me the story that always comes to my mind whenever I hear about them. One day, when she was a young girl, a group of Black Panthers showed up at her door with groceries. My grandmother refused them, as she favored Dr. Martin Luther King’s brand of fighting for civil rights. The Panthers were persistent, but not in trying to arm her family… they were more about protecting the black community and bringing said community together, from my mom’s adolescent first-hand perspective anyway.

But some white people felt threatened by the Panthers, and that was an image the Panthers wanted to project. They dressed like military guerillas in BDU-style outfits and their signature black berets, carrying weapons and marching on patrols to protect neighborhoods. They chanted rhetoric meant to intimidate whites the same ways whites intimidated blacks on a daily basis, making them feel as unsafe as black people felt. Sadly, all of that nuance was lost on the ignorant.

Beyoncé’s Message Was One Of Peace And Equality, Not War.

So what was Beyoncé trying to accomplish with her Black Panther segment? Education… that’s about it. She was trying to shine a national spotlight on #BlackLivesMatter. On police brutality. On the murder of Mario Woods at the hands of five San Francisco cops. She was drawing a parallel between the messages of the Black Panther movement of the 1960’s and the Black Lives Matter movement of today, while reminding all of us that these conditions still haven’t changed. These are still serious, disturbing issues that need to be addressed.

Calling Beyoncé’s performance “racism” does little more than prove that you have no idea what racism actually is. It isn’t a thought or an idea that an individual has. It’s a system of perpetual injustice that lessens the rights and the voices of an entire group of people. And your Neanderthalic reaction when seeing Beyoncé’s performance and your refusal to educate yourself on the Black Panthers or Black Lives Matter prove that said racism is still alive and well.

A friend of mine commenting on a Facebook post I made about this recently claimed that the Super Bowl wasn’t the right setting to address matters of race or politics. He argued that it was a family event, that children were watching, that it wasn’t the right time or the right place for Beyoncé’s performance or her message. Well, I disagree. It was exactly the right time and exactly the right place. And do you know why I’m certain I’m right about that? Because several days later, I’m writing about it… and you’re reading about it, too.