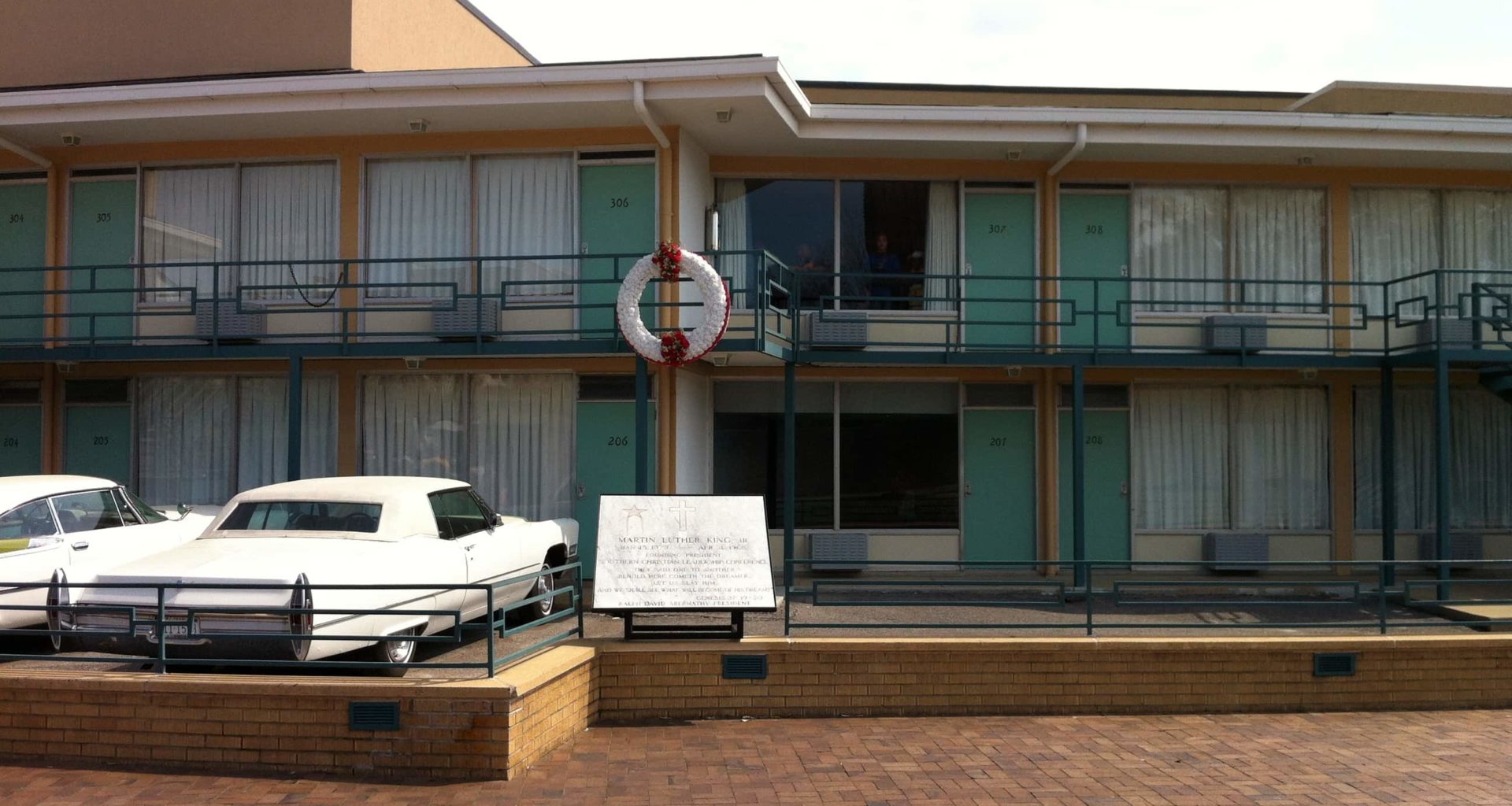 Over the years, Martin Luther King Jr.’s message has been whitewashed, boiled down to his dream that his children would be judged by the content of their character, not the color of their skin. Conservatives like Glen Beck like to help people to forget that King died while fighting for labor rights. King was growing radical, increasingly seeing American capitalism and its discontents as one of the main sources of injustice. In his last book, King took a very holistic approach to justice and equality, criticizing America for spending so much on its military and not enough on helping the poor.

King’s last campaign was to support striking sanitation workers in Memphis, Tennessee. He concluded his last speech, the day before he was assassinated by saying,

What did King see from the mountaintop? What is the promised land of justice and equality in America?

Some conservatives argue that we have reached the goals of the Civil Rights Movement simply because racism is less socially acceptable. They ignore the fact that with the rise of the Tea Party, its acceptability is resurgent. Though, as CNN commentators argued, the new threat is ‘Racism without racists.’

When we look at the news from the past year, with its killings of unarmed black men, the failure to indict killer cops, the protests, as well as the riots, the slander of protesters, and the controversy of reform, it should be clear that an unjust history doesn’t just go away.

In his last speech, King co-opted capitalism and called for wealth jiu-jitsu. He argued that blacks should collectively use their purchasing power to force change,

“Now the other thing we’ll have to do is this: Always anchor our external direct action with the power of economic withdrawal. Now, we are poor people. Individually, we are poor when you compare us with white society in America. We are poor. Never stop and forget that collectively — that means all of us together — collectively we are richer than all the nations in the world, with the exception of nine. Did you ever think about that? After you leave the United States, Soviet Russia, Great Britain, West Germany, France, and I could name the others, the American Negro collectively is richer than most nations of the world. We have an annual income of more than thirty billion dollars a year, which is more than all of the exports of the United States, and more than the national budget of Canada. Did you know that? That’s power right there, if we know how to pool it.”

He then called on his followers to go to the businesses mistreating their poor black employees, and politely tell them to meet certain demands. If they refused, they should organize boycotts, and find alternative places to spend their money. This is a testament to King’s tactical nimbleness and rhetorical depth. It also shows why he was a greater threat to the rich power establishment than many realize today, and why his message has been whitewashed.

King would likely agree that the promise land he saw would include relative purchasing power equality between black and white people. The subprime mortgage fraud was the biggest blow to the black community’s wealth since Civil Rights. About a dozen banks were charged with foisting bad loans onto black people. Wells Fargo caused the foreclosure of hundreds of homes owned by black people in Baltimore alone. According to testimony, the practice was overtly racist,

Wells Fargo, Ms. Jacobson said in an interview, saw the black community as fertile ground for subprime mortgages, as working-class blacks were hungry to be a part of the nation’s home-owning mania. Loan officers, she said, pushed customers who could have qualified for prime loans into subprime mortgages. Another loan officer stated in an affidavit filed last week that employees had referred to blacks as “mud people” and to subprime lending as “ghetto loans.”

American financial institutions used the black community’s purchasing power against them. Tens of thousands of black families were ruined. The overtly racist housing practices of the mid 20th Century were replaced by racism by banks in housing practice, in a way that Kanye West might refer to as getting “Merrill Lynched.” The results are staggering. The Great Recession wiped out a lot of wealth in every community in America. But the experience for black families was dramatically different than that of white families. In 2005, the median white household wealth was $134,992. By 2009, it had declined to $113,149. In 2005, the median black household wealth was $12,124. By 2009 it had declined to $5,677. While white wealth declined by 16%, black wealth declined by 53%. Over the course of the Great Recession, median black wealth declined from being 1/11th of median white wealth to being 1/20th. Following the Great Recession, the average white family has 20 times the purchasing power of the average black family.

Purely in terms of wealth equality and purchasing power, America has, almost literally, accomplished nothing since the 1960s. Things were improving, with black America riding an upward trend far below white America’s upward trend. But, while the Great Recession was a major anchor on growth for white America, which will haunt many for years, for black America, it set them back to square one. It wiped out half of all black wealth. It destroyed an entire generation of growth in the black community. This happened primarily because banks were preying on black people striving for the American Dream of home ownership.

This is not what King saw from the mountaintop.

The black community was much poorer than the white community to begin with. But far more intense poverty crushed black families like an avalanche from coast to coast. Two things happened simultaneously. The Great Recession led to lower public resources. In some areas, revenue from traffic fines issued by police grew as a percentage of municipal income. At the same time, with greater economic desperation, there was an uptick of petty crime. With police under pressure to bring in more revenue, and increased poverty, especially among blacks, the justice system has regressed to more racialized practices in many places. This is how, in 2011, NYPD stopped and frisked more black men in New York than the number of black men who live in New York. This is how an unarmed Eric Garner gets choked to death for selling loose cigarettes in Staten Island. This is how Ferguson, and other St. Louis area municipalities, issue as many traffic tickets to black people as there are black people living in the town. This is getting pulled over for Driving While Black.

This tightening of the glove of justice is on top of the already onerous incarceration rate in America. Since Reagan launched the drug war in the 1980s, the prison population has skyrocketed. The Atlantic reports that Mark Mauer, author of The Race to Incarcerate, says,

“No other society in human history has ever imprisoned so many of its own citizens for the purpose of crime control.”

According to a Human Rights Watch report, it is not debatable that the drug war has racist outcomes,

Relative to their numbers in the general population and among drug offenders, black Americans are disproportionately arrested, convicted, and incarcerated on drug charges.

It is not that black people do drugs more than whites. Those rates are roughly equal. Black people are arrested, tried, convicted and sentenced at far greater rates. The US has 5% of the world’s population but holds 25% of the world’s prisoners. Blacks and Hispanics are almost half of the 2.3 million Americans behind bars, even though they are roughly a quarter of the general population. This is what, essentially, replaced segregation. This is the foundation of socioeconomic quicksand upon which black Americans were trying to build when predatory banks cut their wealth by half. It is the context in which broken windows policing and predatory fining squeezes the already poor, and overpoliced. This is why, when native son Mike Brown is shot down in the street while unarmed, and Eric Garner is choked to death for talking back, it is the last straw.

The lack of wealth in the black community is a legacy of slavery and segregation. When the economy turns south, white people have greater accumulated wealth to draw on from generations of savings, home owning, educational degrees, career advancement, and avoiding the shackles of the justice system. On the whole, black people have nothing to fall back on when they lose their home, because, for centuries, their families were not allowed to accumulate any wealth. Today, they are ostensibly allowed to, but with few exceptions, in practice, they are not able to.

This is not the promised land.

It may be true that we have made some progress in judging folks by the content of their character since King’s day. Comedian and actor Chris Rock said he is hopeful for the future because,

But this is the symbolic, general version of King’s Dream. It is the symbol that those who wish to water it down rally around. The declining social acceptability of racism among white people does not mean that America has achieved equality for its black community. There is still great systemic racial injustice in America. We will not reach the promised land that King saw until the black community as a whole has been severed entirely from the social, economic, political and justice legacy of slavery and segregation. After two and a half centuries of slavery, a century of segregation and half a century of Civil Rights, we have not arrived, we still have a long way to go.