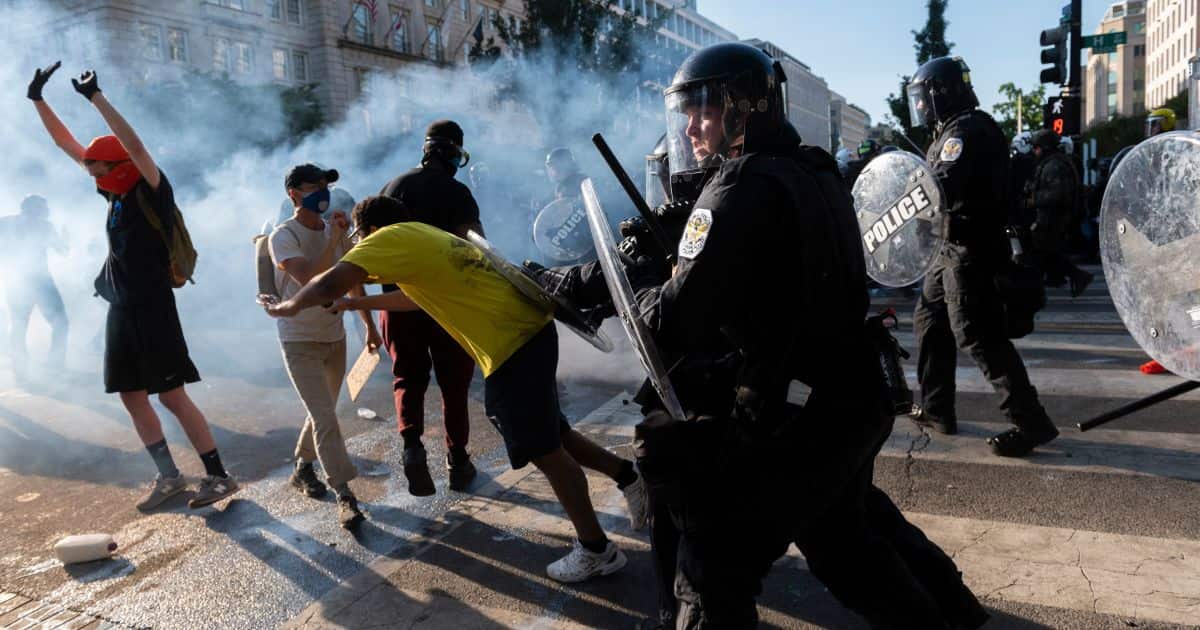 A shocking video has surfaced recently that shows state police in Connecticut attempting to fabricate charges to pin on a protester after arresting him and illegally seizing his camera.

Fortunately, These Police Officers Were Careless

That’s because they didn’t realize the camera was still recording.

So now this has now become the focus of a lawsuit, filed late last week by the American Civil Liberties Union (ACLU) of Connecticut.

Connecticut state troopers arrested Michael Picard on Sept. 11, 2015. Picard, a privacy and open-carry activist was holding up a sign that told motorists “Cops ahead, remain silent,” while standing on a highway traffic island near a DUI checkpoint. The next thing he knew, officers had illegally confiscated his pistol and SLR-style camera, the ACLU said. Video footage shows the officers panicking when they realize Picard has a valid gun permit.

The officers involved — Master Sergeant Patrick Torneo, Sergeant John Jacobi, and Trooper John Barone arrested Picard during the checkpoint and the lawsuit is being heard in the United States District Court for the District of Connecticut.

Apparently These Officers Know Little About The Bill Of Rights

According to Law Newz, Barone took Picard’s camera and allegedly told him, “It’s illegal to take my picture.” And in the video, someone can be heard saying that. The officer is also accused of improperly taking the man’s holstered pistol. Connecticut, by the way, is an open-carry state.

Because the camera was set to record, it picked up everything.

And According To The Lawsuit:

“At Torneo’s cruiser, the defendants checked Mr. Picard’s pistol permit and confirmed what they already knew: it was valid. Nonetheless, Torneo instructed one of the defendants to ‘have that Hartford lieutenant call me,’ so that Torneo could check if Mr. Picard ‘has any grudges.’ A ‘grudge’ is police slang for a personal bias held by a police officer against a person because of a dispute or past display of disrespect towards the police.”

But the cops didn’t uncover any “grudges” against Picard. Even so, Barone asked the others “do you want me to punch a number on this one? We gotta cover our ass.”

The alleged actions by these cops violated Picard’s First and Fourth Amendment rights, the ACLU notes.

“Taking photographs and videos of things that are plainly visible from public spaces is your constitutional right. That includes federal buildings, transportation facilities, and police and other government officials carrying out their duties.”

Dan Barrett, Legal Director of ACLU of Connecticut noted that the three cops decided on two criminal infractions — reckless use of a highway by a pedestrian, and creating a public disturbance. Then they deliberate on how to support the public disturbance charge, and the top-level police officer tells the other two “what we say is that multiple motorists stopped to complain about a guy waving a gun around, but none of them wanted to stop and make a statement.”

“In other words,” the ACLU notes, “what sounds like a fairy tale.”

Imagine What Might Have Happened If The Camera Didn’t Work

Barrett noted that the tickets the police officers gave Picard brought about a criminal prosecution in the Connecticut superior court. Although the state eventually dismissed both charges, it took him an entire year to untangle himself from judicial red tape.

In the meantime, Picard filed a complaint with the state police. They claimed an internal investigation couldn’t be done without interviewing him. So they kept calling him — even though, Barrett notes, there were criminal charges pending and Picard had a criminal defense lawyer. That lawyer repeatedly called the state police and told them “don’t you ever call my client again, you have to talk to me.”

“But they continued to try and get Michael to come in and be interviewed without his lawyer, claiming that they couldn’t do the investigation unless Michael gave a statement,” Barrett said. “It was unbelievable — this is an interaction that was recorded from start to finish on high-quality digital video.

“A year later there has been zero movement on the internal affairs investigation as far as anyone knows, which just shows that police and prosecutors in Connecticut should not be in charge of policing themselves.”

In the complaint, the ACLU contends that Picard’s Fourth Amendment rights were violated because of the “seizure of Michael’s camera without probable cause to believe that it contained evidence of a crime, or a warrant for its seizure.”

“The police cannot grab people’s property and confiscate it on a whim,” Barrett said.

Another of the claims is a First Amendment retaliation claim, he noted.

If This Incident Hadn’t Been Recorded, Would The Charges Have Been Dropped?

Undoubtedly the outcome for him would have been tragic, and the officers involved would think nothing of it.

Now think of how many more times something like this may be happening in the U.S. With an outcome much more tragic for those who are victimized. Think of all the ways in which police have victimized people of color. How many times have they been victimized in this way by police?

It’s pretty revolting that these police officers were willing to ruin this man’s life to save themselves.

Want to see for yourself what happened? Watch the video below.