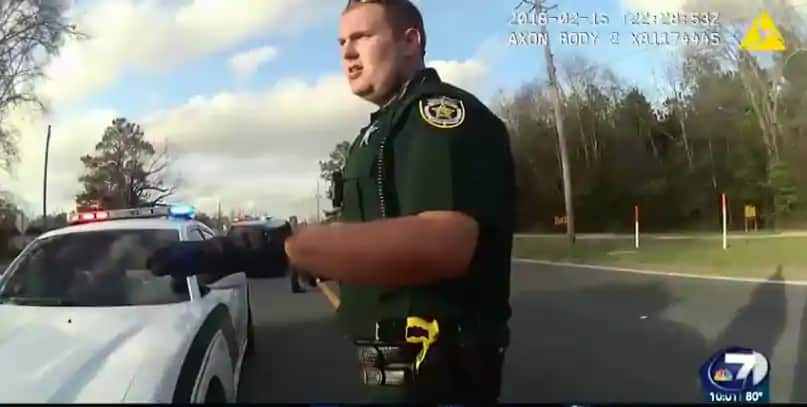 On Saturday, Officer Michael Thomas Slager pulled Walter L. Scott over in North Charleston, S.C. for a broken tail light. Within five minutes, Scott was dead with eight bullets in his back.

Slager gave the usual excuses about how he felt threatened and the big, scary black guy tried to overpower him and take his taser away. But — unlike so many other police officers who’ve murdered black men over minor offenses like broken tail lights — Slager won’t get away with it.

An earlier post from Reverb Press reports a passerby caught the whole horrific incident on video:

Slager apparently didn’t realize that the entire encounter was recorded by a bystander. When Scott broke away from the officer, he ran with Slager pursuing him. The bystander ran, too, cell phone in hand, swearing to himself but capturing the whole thing.

For once, the justifiably angry protesters will get their trial and some form of vindication. Unlike the officers who killed Eric Garner, Michael Brown, Tamir Rice and countless others, Slager has been charged with murder. According to The Post and Courier adds that the state will investigate the death and “any civil rights violations in Scott’s death.”

The U.S. Department of Justice said in a statement that FBI investigators would work with the State Law Enforcement Division, which typically investigates officer-involved shootings in South Carolina, and the state’s attorney general to examine any civil rights violations in Scott’s death.

The murder charge could land Slager a 30-year to life sentence in prison, and will be prosecuted by the 9th Circuit Solicitor’s Office.

To further add to Slager’s misfortunes, he got fired from his job and got dumped by his attorney, David Aylor.  Or, as more genteel folks might say, “removed himself as counsel.” The Daily Beast reports

Charleston attorney David Aylor told The Daily Beast that he took on Slager as a client on Saturday, the day of the shooting, and removed himself as counsel on Tuesday afternoon. Aylor said he wouldn’t go into detail about his brief representation of Slager thanks to attorney-client privilege but he spoke generally about the situation.

But what about Aylor’s initial assessment shortly after he took Slager’s case? At first Slager declared:

“I believe once the community hears all the facts of this shooting, they’ll have a better understanding of the circumstances surrounding this investigation.”

Well, it sounds like Aylor got way more understanding about Slager shooting Scott than he bargained for. Aylor explains that he made the statement according to what he believed at the time, and then the video came out.

I think that there’s been a release of information that was not public information at the time, or not discovered at the time at least to any knowledge of mine or anyone else publicly— at least the video.

NBC  reports 50-year-old Scott had four children and “was remembered as kind, outgoing, and passionate about sports and music by [his] friends and family.” Scott’s parents believe he ran away from Slager because he owed back payments for child support. Scott’s dad explained:

“I believe he didn’t want to go to jail again. He just ran away,”

Here’s the video from NBC with a report on Slager shooting Walter Scott, and the aftermath.