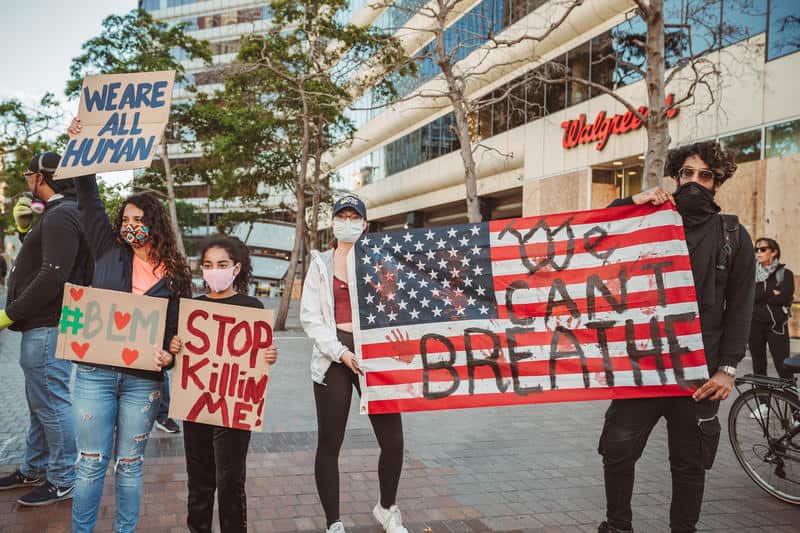 When Calling It Out Isn’t Enough To Stop Racism

How do you stop racism? You can’t, but haters will at least keep it under wraps if they know there are consequences. Alas for John Pisone, he had to learn the hard way. Raw Storyreports It all started when Pisone swaggered over belligerently towards a small group of anti-fracking protesters in Mars, PA, and then started taunting them:

“Have you actually done something with your life, have you had any kind of a job?”

Two protesters laughed in disbelief, as the camera panned in the gathering of grandparents sitting on rocking chairs with colorful signs asking Rex Energy to stop fracking near the local schools and their grandchildren. That’s right. Joe Pisone’s took time to pick on a bunch of awesome Grammies and Grampies. Nice. Real nice. Normally, just not giving bigots the attention or affirmation they seek is enough to stop racism … At least the most offensive kind of “let it all hang out” kind of racism.

Suddenly, John Pisone gestured over towards the camera, and sneered:

Somehow, the cameraman — whose name is Tom Jefferson, and who happens to be black — kept his cool and kept that camera rolling.

“What did you say?” one of the activists challenged, with a mix of anger and disbelief. But that’s no way to stop racism once it’s built a full head of steam. Joe Pisone sneered defiantly,

The stunned protesters gathered their wits as another one came to Tom Jefferson’s defense:  “We’re peaceful, we do not need your antagonism.” Pisone, of course, responded with some lame attempts at making monkey noises. He then revealed the reason why he wasn’t at work: His gig got rained out.

When will racists, bad cops, and other horrible kinds of people figure it out: Every one has a camera these days. And in John Pisone’s case, it wasn’t just someone whipping out a cellphone,. Nope. This future Darwin Award winner was stupid enough to say nasty, bigoted crap while looking straight at the guy holding the video camera. When Tom Jefferson came to film a handful of feisty but mild-mannered grandparents and their allies, he probably had no idea what he’d be subjected to.

The Presence Of Cameras Won’t Stop Racism: But Eventually The Damaging Videos Might.

On Sunday, Tom jefferson posted the video to YouTube, where someone saw it and brought it to the attention of John Pisone’s now-former employer, MMC Land Management. They promptly fired him and, on Tuesday, posted the following message on their Facebook page:

“Today, we were disgusted to learn that one of MMC’s former employees used racial slurs and made racially charged comments during a peaceful protest in Mars, Pennsylvania, outside of work hours at a location with which we have no affiliation. We are sorry that this incident occurred. Whether at work or not, we do not condone hate speech – EVER.”

Here’s the video that helped stop racism…Or at least put a serious cramp on one person’s racism. If John Pisone wants a job again, he won’t be spewing that kind of filth aloud any time soon.

As for the protest, WPXI reports the grandparents gathered by the access road to Rex Energy’s fracking well with their rocking chairs and signs on Dec. 21. Grandparent Laurel Colonello told reporters that the drilling site is way too close to the school and puts the children in danger.

“This is a dangerous activity that really benefits few people only with money and we are totally opposed to it and we’ll sit here as long as we have to.”

Just because the drilling has already started doesn’t mean they can’t stop it.