The Tamir Rice Shooting Was Legal. That’s The Problem. 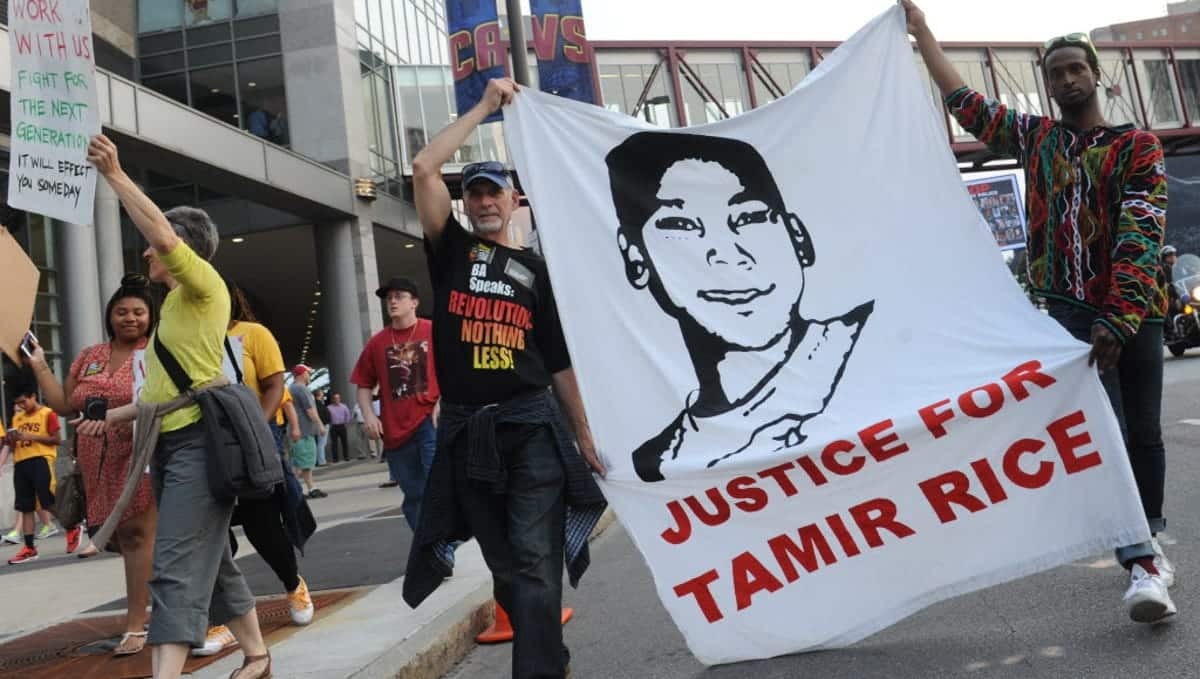 Yesterday a grand jury declined to indict either of the two Cleveland police officers involved in the fatal shooting of 12-year-old Tamir Rice last December at the Cudell Recreation Center. At a press conference held shortly after 2:00pm EST, Cayuga County Prosecutor Timothy J. McGinty announced that the officers will not face any criminal charges.

“It would be irresponsible and unreasonable if the law required a police officer to wait and see if the gun was real,” McGinty said, referring to the toy Airsoft gun that Rice had on him when he was shot. “Simply put…the evidence did not indicate criminal conduct by police.”

McGinty exited the conference without taking questions from the media.

Unfortunately, McGinty is probably right when he says there was no “criminal conduct” on the part of the officers—at least from the standpoint of legal precedent. That’s one of the reasons we face a crisis of police violence in this country.

One Legal Precedent Has Major Influence On Use-Of-Force Cases

In 1989 the Supreme Court issued a decision in the Graham v. Connor case. That decision read, in part:

“The reasonableness of a particular use of force must be judged from the perspective of a reasonable officer on the scene, rather than with the 20/20 vision of hindsight. The calculus of reasonableness must embody allowance for the fact that police officers are often forced to make split-second judgments—in circumstances that are tense, uncertain and rapidly evolving—about the amount of force that is necessary in a particular situation. The test of reasonableness is not capable of precise definition or mechanical application.”

Graham v. Connor set a powerful precedent, one that allows the vague concept of officers making “reasonable…split-second” decisions to influence not only the judicial process but also police training as it relates to use of force. Kimberly A. Crawford, a retired FBI agent who reviewed the Rice shooting for McGinty’s office, outlines the influences of Graham v. Connor in her report on the case. The report is more disturbing than she probably intended.

“The practical effect of the Supreme Court’s decision in Graham v. Connor and other federal court cases, is that those sitting in judgment of an officer’s use of force must view the relevant facts from the perspective of the law enforcement officer on the scene,” Crawford writes in her report. “Accordingly, the relevant facts are those facts, and only those facts, that were available to the officer at the time the decision to use force was made.”

Omitting facts an officer couldn’t have possibly known at the time of an incident—like the fact that Rice’s gun was a toy or that he was only 12 years old—seems fair enough on the surface. It’s the “perspective of the law enforcement officer” part that becomes a bit troubling once the details of what that entails become more clear.

For instance, Crawford is referring to the perspective of “an officer trained to recognize and react to a threat.” And here is how Crawford describes that training:

“Human beings are not born recognizing a threat—it is something that must be learned… Law enforcement officers are trained to recognize that any confrontation with a person harboring a malicious intent may pose a significant threat if, left unchecked, they are able to kill or incapacitate the officer and gain access to the officer’s weapon. Obviously, if the individual being confronted is reasonably believed to be armed, the officer’s attention to those actions will be intensified. In such a situation, officers are taught to focus on the hands of the individual. If the hands move in the direction of a ‘high-risk area’—an area where a weapon may be concealed, such as inside a jacket, towards the waistband of pants, or under the seat of a car— well trained officers will immediately identify this as a serious threat.”

Contrary to the common assumption that officers’ training makes them more calm and level-headed during interactions with citizens, Crawford’s assessment may suggest that law enforcement training actually makes officers overly sensitive in potentially violent situations. Of course this is necessary to some extent, but we’ve seen numerous instances where being trained to focus on “high-risk areas” has led to unnecessary shootings. For instance, officers shot Rice within seconds of encountering him because they thought he lifted his jacket and reached towards his waistband. Likewise, an officer in South Carolina shot Levar Jones at a gas station within a matter of seconds as Jones reached to retrieve his license from his truck, after being instructed to do so by the officer who then shot him.

The crisis of police violence becomes even more troubling when considering that the way officers are instructed to use their firearms might be quite different than what we like to imagine. Before dash cams and cell-phone cameras made us realize just how often and how quickly police shoot citizens, many assumed officers are trained to use non-lethal methods first, to give a verbal warning if they are about to shoot, and then, if it comes to that, to try to immobilize the suspect with a non-lethal wound. Crawford says that is not necessarily the case.

“A common misconception often voiced loudly after a lethal law enforcement shooting is that there was no need to kill the subject, the police could have shot him in the arm or the leg,” Crawford writes, attributing the misconception to Hollywood films. Instead, she claims, “[officers] are trained to shoot to stop an imminent threat.”

And what is the best way to stop an imminent threat? According to Crawford:

“The quickest, most efficient and practical way for a law enforcement officer to forcibly bring about a timely halt to threatening actions is to deprive the subject’s brain of the oxygen necessary to continue conscious action. Because oxygen is carried to the brain by blood, law enforcement officers are trained to aim for center mass where most of the blood-bearing organs are located. Attempts to incapacitate by shooting a subject in the arm or leg are not only impractical, they are contrary to universal law enforcement training.”

While the investigation of the Rice shooting has been tainted from the start, as many use-of-force investigations are, Crawford’s report could be considered representative of contemporary legal interpretations related to use-of-force cases. That is not to say that what Crawford describes is how things should be, or even that she believes that is how things should be (she prefaces her report with the assertion that hers is strictly to review the shooting from the perspective of the United States Constitution). It’s simply an acknowledgement that Crawford is experienced and respected in her field. She received her JD from the Dickinson School of Law, instructed FBI and DEA agents on the use of deadly force while with the FBI, and has published more than 30 articles on “various areas of Constitutional Law” in the FBI Law Enforcement Bulletin, according to her resume attached to her report. She also “participated in the development of FBI policy” on deadly force.

Whether we agree with Crawford’s interpretation or not is irrelevant. Her opinion on the importance of Graham v. Connor is shared by many in law enforcement and justice. A 2014 POLICE Magazine article responding to the killing of Michael Brown notes, “Findings from Graham v. Connor determine the legality of every use-of-force decision an officer makes.” Quoting retired LAPD Capt. Greg Meyer, the article advises officers to keep Graham v. Connor in mind when writing their reports on use-of-force incidents. “When you focus on the Graham factors, your police report will be better,” Meyers says. “Your report should be specific about what the suspect was doing that caused you to use force.”

A 2012 essay in AELE Monthly Law Journal states, “In 1989 in Graham v. Connor, the Court moved the judicial analytical focus from the long used Fourteenth Amendment substantive due process, to the Fourth Amendment objective reasonableness standard. The court expanded post incident analysis to include all uses of force.” To be clear, according to AELE, this wasn’t merely a shift in focus. It marked a fundamental transformation in the way use-of-force law was interpreted and, subsequently, how law enforcement were trained to understand the law. “To say the years from 1985 to 1989 created a change in clearly established law is an understatement,” the essay continues. “Tennessee v. Garner and Graham v. Conner changed the post use-of-force analysis process for the courts and indirectly provided an opportunity for change for the law enforcement community and their use-of-force trainers. Some argue it mandated change via clearly established law.”

When looked at individually, any one of the factors outlined in Crawford’s report may not seem particularly problematic. However, when combined together, a much darker picture starts to emerge. Police officers are trained to develop a heightened perception of possible threats. For the past 25 years their use-of-force training has been based on a legal precedent that suggests considerable leeway in the use of deadly force, which could imply that if they shoot a citizen, even if that person is unarmed, an indictment is unlikely and a conviction is almost out of the question. And if they do decide to shoot, they’re being trained to aim for vital organs, to stop the flow of oxygen to the brain, which sounds an awful lot like they’re being trained to shoot to kill the citizens they’re supposed to protect.