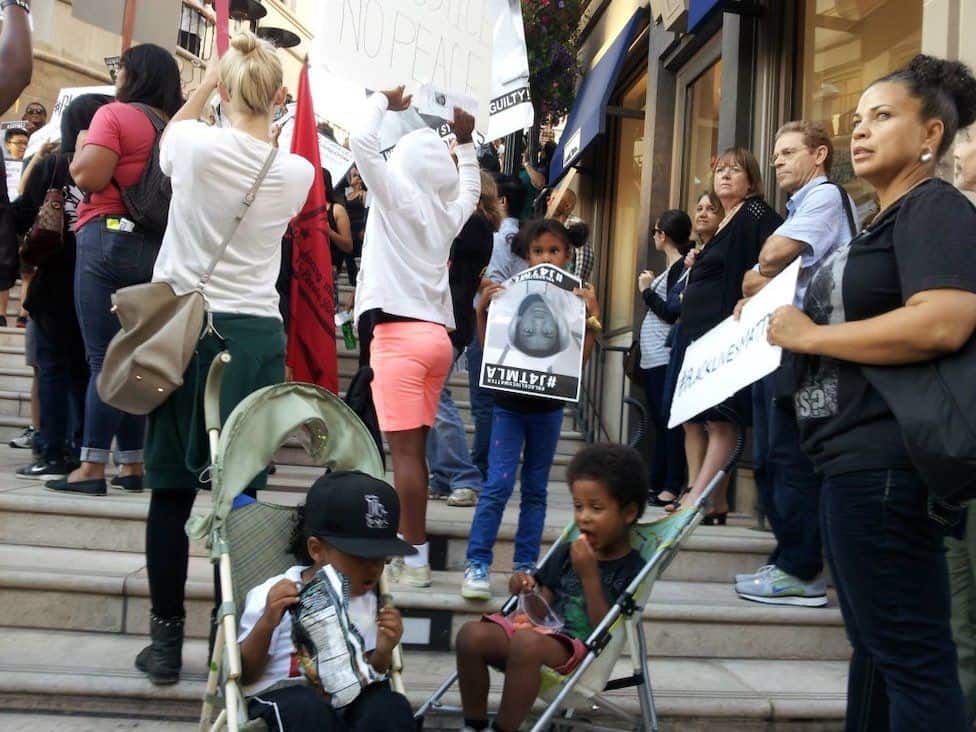 Black Lives Matter protesters organized and marched across the United States over several days following a string of fatal encounters between police and black men. The shooting deaths of Alton Sterling and Philando Castile by police have turned the nation’s attention to questions of racial justice and policing. Protesters across the country encountered situations that range from inspiring to disturbing as as they marched. The following tweets captured intense moments in the protests.

One of the most viral tweets related to Black Lives Matter of the past few days was this one from a protester in Chicago.

Many commentators sharing the tweet observed that it encapsulated so much truth about policing, white privilege and racial injustice in one single incident. That a police officer was about to hit a black protester, but, according to the tweet’s author, fell back when a white woman jumped in front of her, shows the inherent imbalance in policing.

In Chicago, activists were also calling for help with bond for two protesters who were arrested and shared some incredible images of the protest.

In New York City, the protests started out under a cloud of tension as it was reported that yet another black man, Delrawn Small, was killed by an off-duty NYPD officer in Brooklyn following an alleged road rage incident.

The NYC protesters took over Union Square in Manhattan.

Protesters shared information that two black news reporters were arrested in Rochester while reporting on protests in New York.

The protests in Baton Rouge, Louisiana turned intense. Baton Rouge is where Alton Sterling was killed by police, and reporters, activists and Black Lives Matter leaders headed to the city for the protests. Video showed police violently detaining many protesters, and using an armored vehicle to disperse the protest.

During the protests, a young black woman in Baton Rouge who was apparently standing calmly in front of police was arrested by several police in heavy riot gear. It was later reported that her name is Iesha Evans, and she is a nurse. The image quickly started going viral. Buzzfeed called the image “iconic.” The image was captured by Reuters photographer, Jonathan Bachman.

This photo of a #BlackLivesMatter protester is being hailed as iconic

Breitbart reporter Lee Stranahan was arrested, and called his detention “unconstitutional” on Twitter. This is significant, since Breitbart is a major right wing news source. It signals that sympathy for Black Lives Matter could spread into conservative circles.

I can’t stress this enough: not only do I believe my imprisonment was unconstitutional but I believe the other protesters was as well.

One of the most significant incidents in Baton Rouge was police arresting DeRay Mckesson. Mckesson is a major leader of Black Lives Matter, and a leading commentator on Twitter for the movement. On the video of his arrest, witnesses can be heard saying that “he wasn’t doing anything,” and police “ran up on him … from behind.”

RT: Los Angeles, you are as powerful as you are beautiful. We will win. #BlackLivesMatter… #BernieStrong

Some protesters engaged in civil disobedience to make their point. A group of protesters formed a peace sign in the middle of an intersection, shutting it down.

Protesters also shut down the 405 freeway in both directions.

Both sides of the 405 freeway have been shut down by protesters now. @BLMLA #BlackLivesMatter #ManchesterShutdown

A peaceful Black Lives Matter protest shut down a bridge between Tennessee and Arkansas.

We got the entire bridge shutdown from Arkansas to Tennessee. This is legendary. #blacklivesmatter #memphis

Activists in Memphis were grateful that the police who showed up did so in regular uniforms, and not in riot gear.

Riot police in Minneapolis/St. Paul resorted to tear gas in an attempt to disperse protesters.

These protests mark an incredible moment in America. A movement has found its voice in protesting systemic racial injustice in America. The nation, and the world, are taking notice.