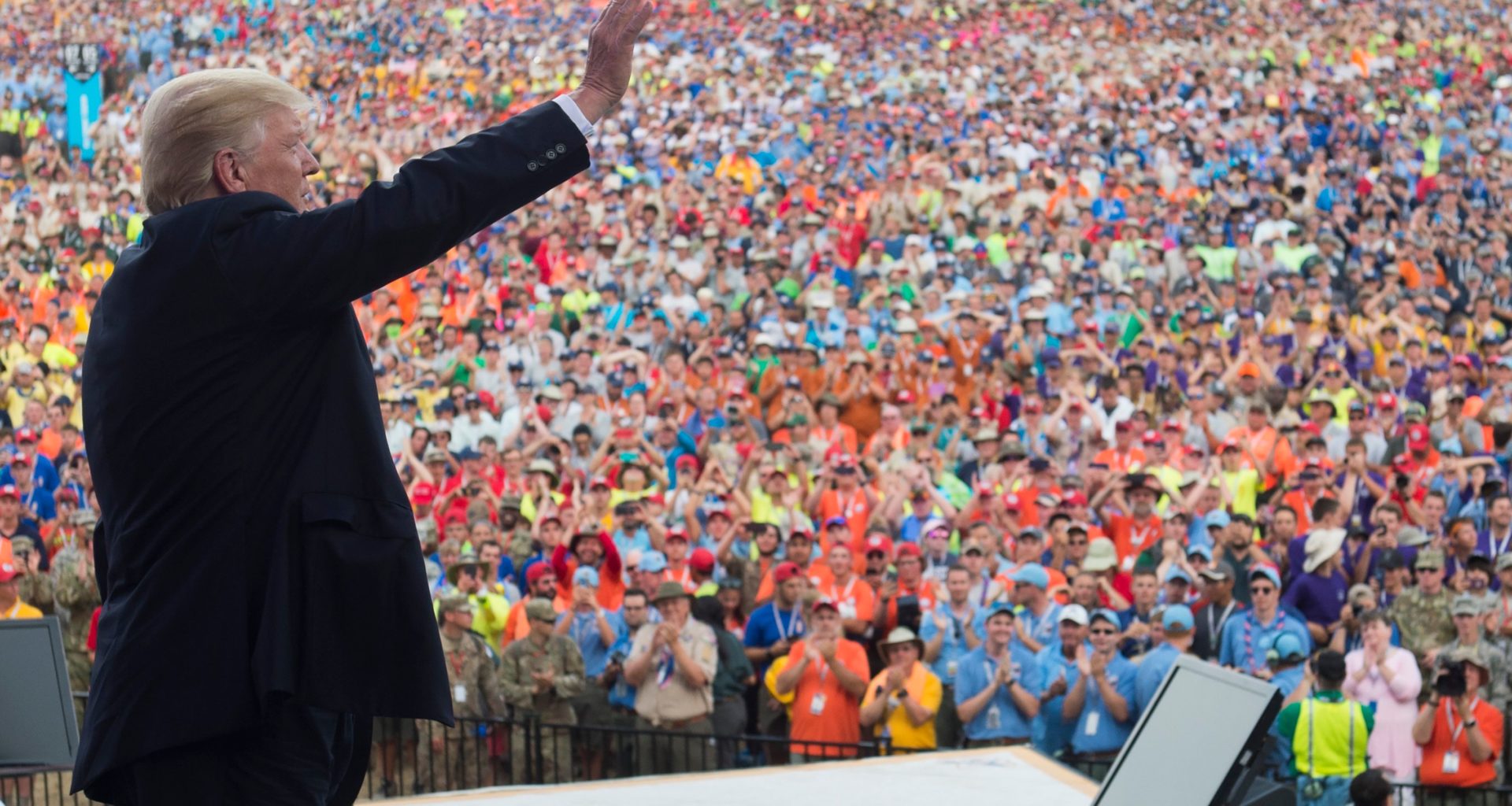 Donald Trump gave a speech before America’s youth yesterday and, as befitting of a president, gave a hopeful, inspirational address…

Donald Trump got in front of a crowd of 30-to-40,000 Boy Scouts and completely lost his mind. Or, as Trump and his supporters like to call it, acted “modern day presidential.”

Six months into this presidency, full of scandals and intrigue and eye-popping “OMG, did he really  just say that?” moments, and Trump still manages to show us that he still has the power to shock the country with his insane rants and sheer bad judgment. His speech during the annual Boy Scout Jamboree on Monday night did just that.

It was a true Trump talk, full of insane boasts about his strange electoral college win and plenty of slams to the media. It was, at times, strangely dark, and, at other times, angrily victorious. It was a bizarre speech given by a man known for his bizarre speeches – and what made the speech even more  bizarre is that he delivered it in front of children.

Here is a collection of some of the more bizarre moments during a rather bizarre speech.

The Top 10 Bizarre Moments Of A Bizarre Speech

He began his speech by saying, “Tonight, we put aside all of the policy fights in Washington, DC you’ve been hearing about with the fake news.” He then added, “Boy, you’ve got a lot of people here. The press will say it’s about 200 people. It looks like about 45,000 people.”

2. He cussed. In front of Boy Scouts.

“I said, ‘Who the hell wants to speak about politics when I’m in front of the Boy Scouts?’ Right?” Trump brayed in front of tens of thousands of children.

As for the answer to his question – who wants to talk politics in front of Boy Scouts – the answer was, apparently, himself. Because he spent the majority of his speech doing just that.

3. He added a little word salad.

“Some of you here tonight might even have camped out in this yard when Mike was the governor of Indiana, but the scouting was very, very important.”

There is nothing to add to that. I’m just presenting it to you in all its glory.

4. He sent a veiled threat to Jeff Sessions…and the GOP at large.

“As the Scout Law says: ‘A Scout is trustworthy, loyal’ — we could use some more loyalty, I will tell you that,” Trump whined. Strange how he keeps coming back to loyalty when he claims he never asked of it from Comey. Do you think it’s possible he may be, I don’t know, lying about that?

5. He obsessed about crowd size. Repeatedly.

He began his speech by commenting on the crowd size, and then claiming the media would lie about it. He later interrupted his own rantings to say, “I’m waving to people back there so small I can’t even see them. Man, this is a lot of people.” And then, later, “By the way, what do you think the chances are that this incredible, massive crowd, record-setting is going to be shown on television tonight? One percent or zero?”

The man has a thing about size, doesn’t he.

“Do we remember that date? Was that a beautiful date? What a date,” he rhapsodized in front of tens of thousands of children who are not old enough to vote.

7. He obsessed over his Electoral College victory. Repeatedly.

“But do you remember that incredible night with the maps and the Republicans are red and the Democrats are blue, and that map was so red, it was unbelievable, and they didn’t know what to say?” Trump asked, hearkening back to 260 days ago.

He then patted himself on the back for his Maine victory: “I went to Maine four times because it’s one vote, and we won. But we won — one vote. I went there because I kept hearing we’re at 269.”

But hey – who in the hell wants to talk politics in front of Boy Scouts, right?

8. He thanked his crowd for “Making America Great Again” even though…

..the majority of them didn’t vote. Because they are children.

“So I have to tell you what we did, in all fairness, is an unbelievable tribute to you and all of the other millions and millions of people that came out and voted for Make America Great Again,” Trump blathered.

9. He revived the War on Christmas

Because of course he did.

“They’ve been downplaying that little, beautiful phrase. You’re going to be saying ‘Merry Christmas’ again, folks,” he said to a crowd of people who have never once been denied the right to say “Merry Christmas.”

“I promise you that you will live scouting’s adventure every single day of your life, and you will win, win, win and help people in doing so.”

What? Is he making a parody of himself? Poking fun at Charlie Sheen? No? He just really sounds like that? My God.

All of that is bizarre enough. It’s almost as if Trump decided to take everything to a new level. To deliver his Trumpiest Trump speech ever.

RELATED: Trump Is Absolutely Terrified, And These 3 Tweets Prove It!

Because you can go back and re-read these moments and add “in front of children” to each one.

And just to give yourself the full flavor of Trump addressing children, here’s a clip of highlights.