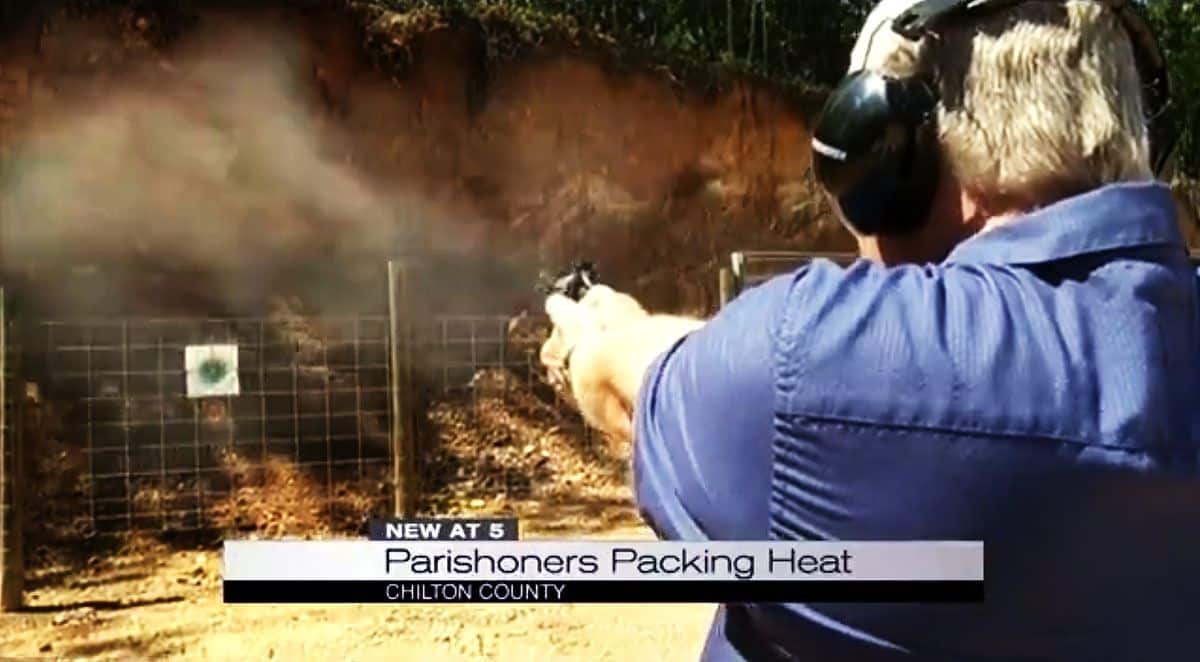 We have all heard the statistics. Traditional churches are a dying breed. Membership and attendance are on the decline and young people are abandoning organized religion. With misguided/uneducated leaders and outreach programs like the one at an Alabama church, who could blame them?

The Rocky Mount United Methodist Church in Jemison, Alabama has come up with a marketing strategy to spur attendance and lure in people who might not normally come to worship, They’ve opened their very own gun range. Yes, a gun range behind the church. Boy, are they ever proud of it. Praise the Lord and pass the ammunition!

What started out as an eyesore – a ditch behind the church, covered in kudzu and a haven for all manner of vermin – has been repurposed. The gully has been turned into a what Pastor Phillip Guin calls a ministry, complete with guns, bullets and the “Prince of Piece.”
“We had quite a number of church members, some elderly ladies, for example, and some not so elderly women that had purchased guns, but didn’t know how to use them,” Pastor Guin told a reporter from WIAT in Birmingham.

Originally, the range was used to teach firearm safety. All that changed as the idea of a murder weapon ministry started to reveal itself to Guin.

Guin says there are many hunters and gun enthusiasts in the congregation. As a result, what started out as gun safety training program transformed into what is now called the Rocky Mount Hunt and Gun Club LLC, a membership-only, not-for-profit entity. Guin sees the club as a way to bring more members to the church and as an outreach to the community.

“This is an opportunity for us to reach out in the name of Jesus Christ in a setting that is completely unique. Even odd by some people’s standards. But who’s to say that church can’t happen right here,” Guin said, pointing at the red clay dirt of the range.

“We also ask that anyone who comes and shoots here sign a release of liability form and agree to the terms of the release,” Guin told the Clanton Adviser. “We also have a sign with the rules for the range posted, and ask those that come to review the rules before they begin shooting.”

So far, the club is comprised of church members. But there are prospective members contacting Guin and other church members regularly.

“Really, the whole purpose of this range is to provide recreational and gun safety in a warm, loving, Christian environment,” Guin said. “We wanted to come up with some different ideas to help our church grow, and we thought this would be a unique ministry to offer to the community.”

Guin anticipates offering gun safety classes in the future to the public, and to develop the property to include a shelter with shade.

“Right now, we are just really happy with how everything turned out,” Guin said. “We found a use for the small ‘Grand Canyon’ behind our church, and turned it into something that is pretty cool.”

We have all heard the argument that God’s word supersedes the Constitution. I’m sure you can find many people in Alabama who would agree with the statement. With that in mind, perhaps instead of promoting a bloody and violent “sport,” Pastor Guin might better serve his congregation by familiarizing himself with the United Methodist Church’s Book of Resolutions. Particularly the section titled Church Is a Weapon-Free Zone.  It states:

Whereas, in keeping with the spirit of Isaiah 2:4: “God will judge between the nations, and settle disputes of mighty nations. Then they will beat their swords into iron plows, and their spears into pruning tools. Nation will not take up sword against nation; they will no longer learn how to make war”;

Whereas, reflecting the church’s traditional role as a place of safety and sanctuary,

We call upon The United Methodist Church to

Pastor Guin may genuinely believe he has started a faithful ministry. But that ministry is in direct conflict with the doctrine of the United Methodist Church. Firearms serve no other purpose than to maim or kill.

Psalm 11:5 The Lord tests the righteous, but his soul hates the wicked and the one who loves violence.

Still Think The North Won The Civil War? These 12 Maps Will Prove You Wrong (2 of 3)