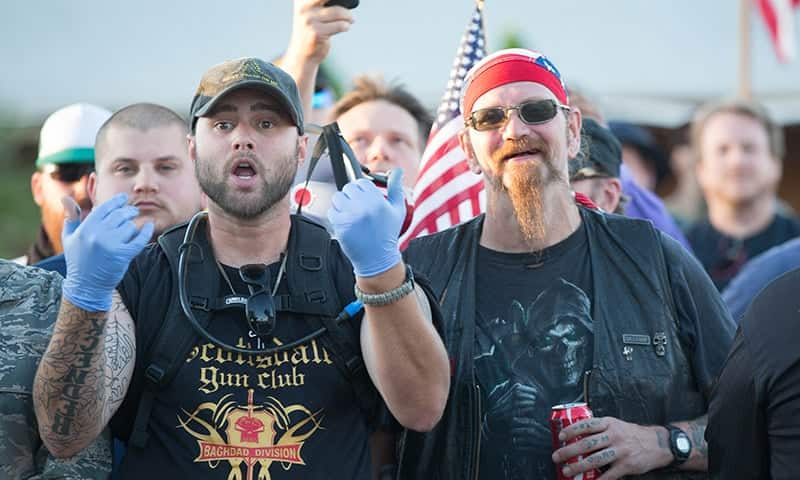 An armed biker gang. A mosque in Arizona. Cartoons of the Prophet Mohammed.  It’s true; there are no more original ideas.

Recipe for disaster? We will see on Friday, May 29, when two biker gang members host what’s being called the Freedom of Speech Rally II outside the Islamic Community Center of Phoenix.

Jon “Scrappy” Ritzheimer and Flash Nelson (who appears to be a woman) plan to hold the event in response to the hate-mongering cartoon contest that was held by anti-Muslim activist Pam Geller (and approximately 99 percent of the police force) on May 3 in Garland, Texas. That  competition was interrupted by two armed men, Elton Simpson and Nadir Soofi, who were allegedly Islamic State sympathizers. They opened fire outside the venue before being killed by security officers. Geller’s next planned stunt is to plaster the winning cartoon all over D.C buses. What could possibly go wrong?

Ritzheimer says the biker gang is planning a “peaceful protest” (while encouraging attendees to show up armed)  and a “draw Mohammed contest” outside the community center, where the Texas gunmen worshiped. In fact, in the Facebook invitation, organizers urge attendees to take full advantage of their Second Amendment right to carry weapons. So far,163 people have RSVP’d. Ritzheimer staged an anti-Islam protest two weeks ago, which drew little attention, before deciding to host this event; thus it being referred to as ROUND 2.

ROUND 2!!!!!!! This will be a PEACEFUL protest in front of the Islamic Community Center in Phoenix AZ. This is in response to the recent attack in Texas where 2 armed terrorist, with ties to ISIS, attempted Jihad. Everyone is encouraged to bring American Flags and any message that you would like to send to the known acquaintances of the 2 gunmen. This Islamic Community Center is a known place that the 2 terrorist frequented. People are also encouraged to utilize there (sic) second amendment right at this event just in case our first amendment comes under the much anticipated attack.
1. Date will be Friday May 29th @ 6:15pm. This is when they normally host a large prayer.
2. Bikers wil (sic) meet at the Denny’s located at 9030 N Black Canyon Hwy Phoenix, AZ 85051@ 5:00pm. Kick Stands up at 6pm.
3. There will be a Muhammad Cartoon Contest and the winner will be announced at the After Party. Participants must show cartoon at the Rally.
4. We will not have food vendors at this event because we don’t want this to turn into a carnival. People can bring snacks and water but please keep the neighborhood clean.
5. There will be an after party starting at 8:30pm at Wild Bills located at 6840 N. 27th Ave Phx, AZ.
Thank you all for your Support. [sic]

They’re meeting at Denny’s. Why is that funny?

In an interview with a reporter from television station KPNX, Ritzheimer defended his event and the T-shirts that will be worn by some of the protesters which re “F**k Islam,”  (Question: How, exactly do you f**k a religion?)

A cursory glance at hisFacebookposts show that Ritzheimer is rabidly anti-Muslim. Ritzheimer has posted photos of himself waving an American flag while wearing the controversial T-shirt. He identifies himself as a former Marine and says that he works at Dysfunctional Veterans, which basically looks like a website for angry, bitter assholes, as evidenced by this quote from the KPNX interview:

“I’m a Marine and I am far from politically correct,” Ritzheimer said. “I’m outspoken and I’ve just had it.” Ritzheimer, who is an atheist, said he hopes to push “out the truth about Islam.” “It’s not that some people are out perverting this religion, it’s these guys are following their book as it’s written,” he said.

OH MY GAWD! Wake up, kook. There are far more “Christians” doing exactly that right now in the U.S. AND they’re actively trying to slip it into our legislation. I’d love to see a demonstration at some Evangelical churches and GOP presidential candidates’ offices. How about it Scrappy and Flash? Jon’s an atheist. This should infuriate him.

Ritzherimer told the reporter that he doesn’t “condone any threats being made to the mosque” during his “Freedom of Speech Rally Round II.” But, of course, there will be guns.

Both Phoenix police and the FBI have been informed of the event, KPNX reported. Phoenix police reportedly refused to comment about what protocols are being implemented.

The president of the mosque where the cartoon contest and rally will be held, Usama Shami, said that he respected the protestors’ right to exercise free speech. However, Shami said the members of the mosque have been told not to engage with Friday’s protestors.