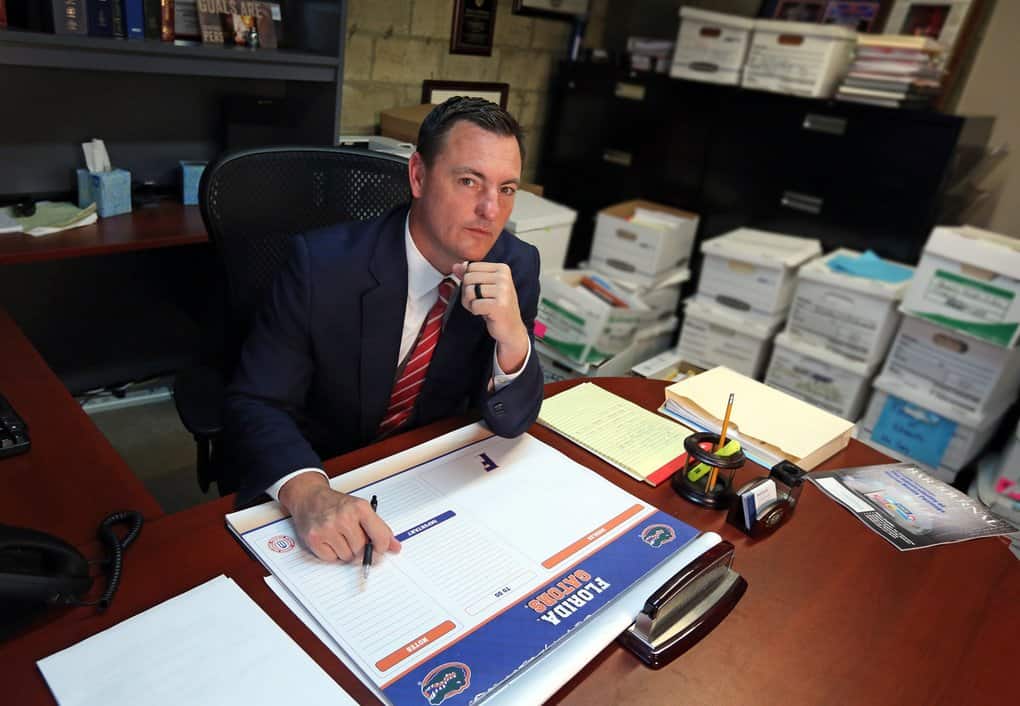 Attorneys say they have evidence that a Mar-a-Lago employee was recruited by Epstein to engage in a pattern of serial child sex abuse. They also “have reason to believe” Donald Trump was “a guest in Epstein’s home during the period of time that Epstein was engaged in molestation.”

Scarola also said there is evidence that one of Trump’s Mar-a-Lago employees was recruited by Epstein’s agent to engage in a pattern of serial child sex abuse. He also said attorneys “have reason to believe” Trump was “a guest in Epstein’s home during the period of time that Epstein was engaged in molestation.”

According to the affidavit:

Scarola also said the case will likely proceed without Trump being deposed or formally called as a witness during the trial:

“There are, as you might imagine, substantial hurdles in calling a sitting U.S president and we don’t want any further delays on this case.”

Epstein is a well-known child molester, having been previously convicted of the crime in the state of Florida. According to court records, Epstein was accused of “repeatedly sexually assault[ing] more than forty … young girls on numerous occasions between 2002 and 2005 in his mansion in West Palm Beach, Florida.”

The statement of undisputed facts filed in 2011 states further:

These sexual assaults included vaginal penetration. Epstein abused many of the girls dozens if not hundreds of times.

The court document goes on to recount the story of one of Epstein’s alleged victims:

Epstein was able to access a large number of underage girls through a pyramid abuse scheme in which he paid underage victims $200-$300 cash for each other underage victim that she brought to him… Palm Beach Police Incident Report details Epstein’s scheme for molesting underage females. Among other things, the Incident Report outlines some of the experiences of other Epstein victims. When S.G, a 14 year old minor at the time, was brought to Epstein’s home, she was taken upstairs by a woman she believed to be Epstein’s assistant. The woman started to fix up the room, putting covers on the massage table and bringing lotions out. The “assistant” then left the room and told S.G. that Epstein would be up in a second. Epstein walked over to S.G. and told her to take her clothes off in a stem voice. S.G. states in the report she did not know what to do, as she was the only one there. S.G. took off her shirt, leaving her bra on. Epstein, then in a towel told her to take off everything. S.G. removed her pants leaving on her thong panties. Epstein then instructed S.Gt o give him a massage. As S.G gave Epstein a massage, Epstein turned around and masturbated. S.G. was so disgusted, she did not say anything; Epstein told her she “had a really hot body.” In the report, S.G. admitted seeing Jeffrey Epstein’s penis and stated she thought Epstein was on steroids because he was a “really built guy and his wee wee was very tiny.”

Despite confessing to soliciting prostitution from underage girls, the billionaire received little more than a slap on the wrist: 18 months jail, and one year of house arrest.

Last year, Trump was accused of rape in a lawsuit filed in New York. According to The Daily Beast:

And just last week, yet another “Jane Doe” filed a suit in New York accusing Epstein and Donald Trump of raping her at a series of sex parties when she was only 13.

Trump has denied Jane Doe’s claims and his reps have said he barely knew Epstein—even though New York media in the ’90s regularly chronicled his comings-and-goings at Epstein’s Upper East Side palace, and even though Epstein had 14 private numbers for Trump and his family in his little black book.

Other associates of Epstein include former President Bill Clinton and Prince Andrew.