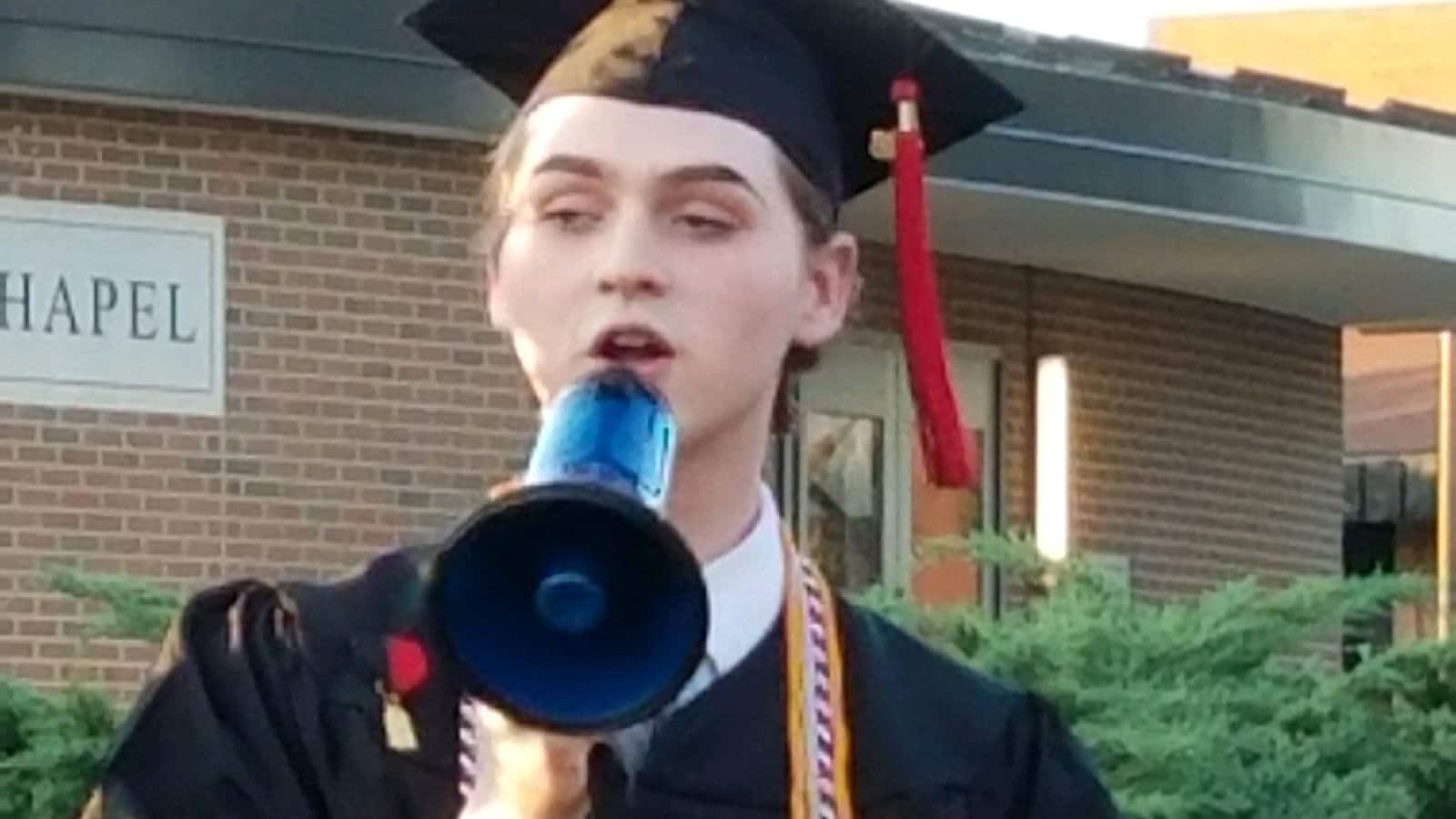 Evan Young was the valedictorian at Twin Peaks Charter Academy High School in Longmont, Colorado this year. He had a barnburner speech ready to give to his graduating class.

The theme of his speech was showing respect to others. Unfortunately, Principal BJ Buchmann gave Evan a lesson in how that works in the real world.

Evan had to submit his speech to Bachmann for approval and went through a couple of revisions that the man requested. But the straight-A student with a 4.5 average thought the main theme was going to remain intact. The idea was to talk about the secrets we keep, leading up to the biggest one on Evan’s chest: he was going to reveal that he’s gay. Evan explained:

“My main theme is that you’re supposed to be respectful of people, even if you don’t agree with them. I figured my gayness would be a very good way to address that.”

Buchmann had other ideas, about which he didn’t bother to inform the student. Instead — even though Evan is 18-years-old and legally an adult — the principal went to the young man’s parents and told them their son is gay. Then he cancelled Evan’s speech without telling him. At the May 16th ceremony, the valedictorian wasn’t even mentioned.

So much for respect. So much for trust. It was a hard lesson in ignorance and prejudice.

The parents had no idea their son was gay. They were ultimately okay with the revelation — but not with how it was made. About the information, father Don Young said:

“He’s Evan, you know? He’s never really expressed interest in either (boys or girls). He’s just a teenager. … But we had no indication beforehand.”

But about the way it was handled, he said:

“The kid worked hard for four years. Straight A’s and everything else. He wasn’t even recognized.”

Buchmann didn’t tell Evan that he wasn’t going to give his speech until a few minutes before the graduation ceremony. When it comes to respect for others, the principal gets a grade of zero. He violated Evan’s privacy and stole his opportunity to deal with who he is in his own way. That theft deprived Even, deprived his parents, and deprived the school’s student body.

As word has gotten out, Evan and his family have received a lot of local support from people familiar with the bullying and harassment that LGBT students face, often at the hands of school administrators. Several LGBT advocacy groups  — One Colorado, Out Boulder, and the St. Vrain Valley Safe Schools Coalition — have been front and center with their support.

Rev. Luke Grobe, who is chairman of the Coalition, cut right to the heart of the matter:

All too often and in too many ways, schools act to repress individuality and freedom of expression.

On Thursday, Twin Peaks Charter Academy released a statement on the controversy that included this ironic description of their mission, “which is to provide students with a rigorous education and the foundations of virtue and character.” As if that weren’t laughable enough, in light of the situation, the school’s attorney, Barry Arrington, added:

“Everyone knows that in our society high school graduation is one of life’s most significant occasions, and a graduation ceremony is a time for family and those closest to the students to celebrate success and express mutual wishes of gratitude and respect. It is not a time for a student to use his commencement speech to push his personal agenda on a captive audience, and school officials are well within their rights to prevent that from happening.”

That statement is wrong-headed in so many ways, it’s hard to know where to begin. First of all, respect was the core value at the heart of Evan Young’s speech, but by all evidence, it’s not a value he learned at Twin Peaks. Secondly, commencement speeches, by their very nature, always involve a personal agenda presented to a ‘captive audience’ — who, as far as we know, weren’t locked in at the ceremony.

In 2013, Daily Camera reported on another area graduate who used his speech to talk about what it was like to be a gay student at Boulder’s Fairview High School. Student Ted Chalfen had applied to give the speech, which he used to thank the student body for their acceptance. No one fainted from shock. The speech was well-accepted and circulated widely via YouTube — which just goes to show that, if we expect the best from our youth, the best is what we get.