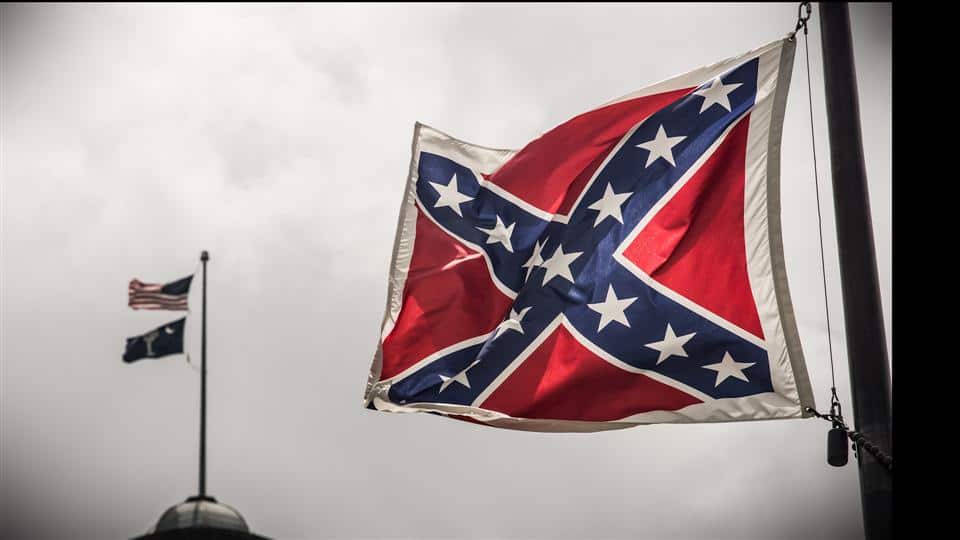 The Rev. Jesse Jackson, a South Carolina native, was in the House when the bill was passed. He framed the inspiration for its passage with these words:

“Honoring suffering is redemptive. And innocent blood is very powerful and they could not say no to that blood. Sometimes martyrs drive us forward.

There were many reminders that the “heritage” that fans of the flag claim it represents is not the heritage of all South Carolinians. Kim Hunter, a black woman from Sumter, South Carolina, brought her children to see the sight of the Charleston massacre, the Emanuel AME Church. She said about the flag controversy:

“Is it everyone’s heritage? It’s not mine.

“My husband is ex-military and we lived in Germany. They wouldn’t fly the Nazi flag there and the reasons are the same.”

“I understand that your ancestors who fought in a war 150 years ago died and you want to honor that. If you want to honor it, you can fly that flag at your house, at your business, put a bumper sticker on your car. But this statehouse grounds belongs to the people of South Carolina and that flag excludes a large portion of the people.”

That is not the universal opinion among South Carolinians. A coalition of state representatives tried to bring the measure to a halt by offering over 60 amendments. Adoption of any of them would have required that the bill go back to the Senate for another vote, possibly derailing the momentum behind it.

A lengthy debate, capped by an impassioned speech from Rep. Jenny Horne, finally led the opposition to capitulate. Horne said:

“I have heard enough about heritage. I have a heritage. I am a lifelong South Carolinian. I am a descendant of Jefferson Davis (the President of the Confederacy) okay? But that does not matter. It’s not about Jenny Horne. it’s about the people of South Carolina who have demanded that this symbol of hate come off of the State House grounds.”

The whole issue has been handled respectfully by those opposed to the flag’s presence on statehouse grounds. They’ve been careful to distinguish between the desire of some to honor their ancestors’ sacrifices and those that use the flag to promote racism and hate.

Now it’s up to the citizens of the state to show dignity and grace during the flag’s removal and it’s installation where it more appropriately belongs — in the Confederate Relic Room and Military Museum.