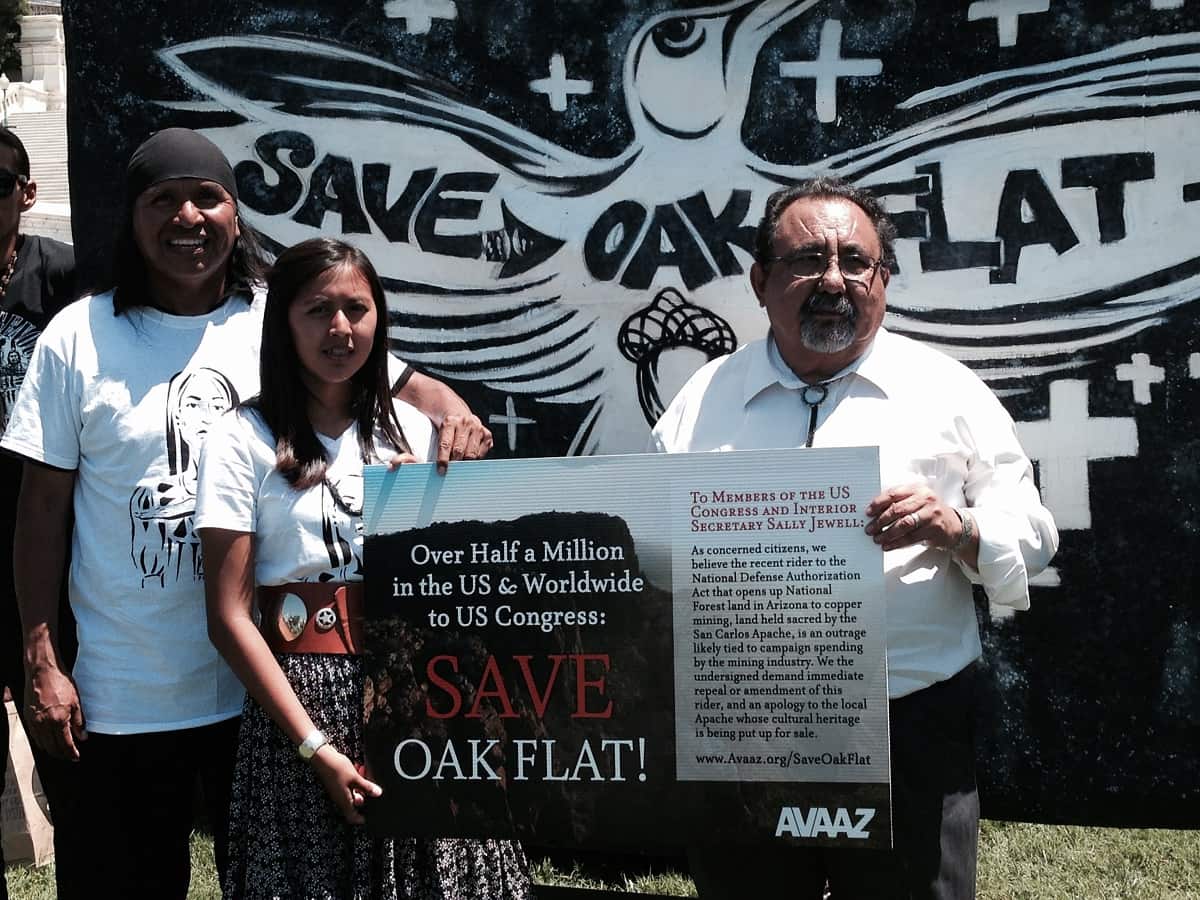 In a late night addition to the 2015 National Defense Authorization Act (NDAA) bill, Congress slipped in a provision that will hand off 2,400 acres of land sacred to the San Carlos Apache to a foreign mining concern. The ancestral and ceremonial lands, a part of the Tonto National Forest, includes the site, Apache Leap, where Apache warriors jumped to their deaths rather than be captured by US troops.

“Since time immemorial people have gone there. That’s part of our ancestral homeland. We’ve had dancers in that area forever – sunrise dancers – and coming-of-age ceremonies for our young girls that become women. They’ll seal that off. They’ll seal us off from the acorn grounds, and the medicinal plants in the area, and our prayer areas,”

The measure which has failed several times in the past but was inserted into the must-pass defense appropriation bill thanks to the efforts of Arizona Republican Senator, John McCain. On passage of the NDAA, the land will be given over to Resolution Copper, a subsidiary of the Rio Tinto, a massive mining concern based in London, England and Melbourne, Australia that has been salivating over the prospect of mining the area for years.

Interior Secretary, Sally Jewell was critical of the way the provision moved forward. Speaking of the numerous land bills being considered,she said,

Of the way Tonto National Forest land was handled, she said however, “

I think that is profoundly disappointing.”

Rambler had been concerned that the long sought land deal might be inserted into the NDAA. When the latest version of the bill was read on Tuesday evening, (Dec 2) there was no mention of the Apache land. On Wednesday morning, there it was. He is asking that the Senate not vote on the appropriation until the measure is removed.

“It may seem impossible but our elders have taught us not to lose faith in the power of prayer and of course prayer will be there to help guide us through, but as far as a strategy, we know it’s going to take a grassroots effort and a lot of awareness in the public eye to see our side of the story and that’s what we need to get out there,”

Beyond the symbolic and spiritual importance of the lands involved, Rambler is also concerned about the potential ecological aspects of the mine and how it will affect his people in years to come. The company plans to us a mining technique called block cave mining which digs under the ore and then lets it collapse into the hollow for recovery. Eventually, the land above it will subside as well. Rambler explained,

“What those mountains mean to us is that when the rain and the snow comes, it distributes it to us,” Rambler said. “It replenishes our aquifers to give us life.”

He’s not sure how that will happen once the land starts subsiding. Resolution Copper promises to monitor it.

Overall, the land deals being considered for inclusion with the NDAA are a compromise. There is bipartisan support for the give and take process and there are benefits in most of them, but somewhere, a line must be drawn.