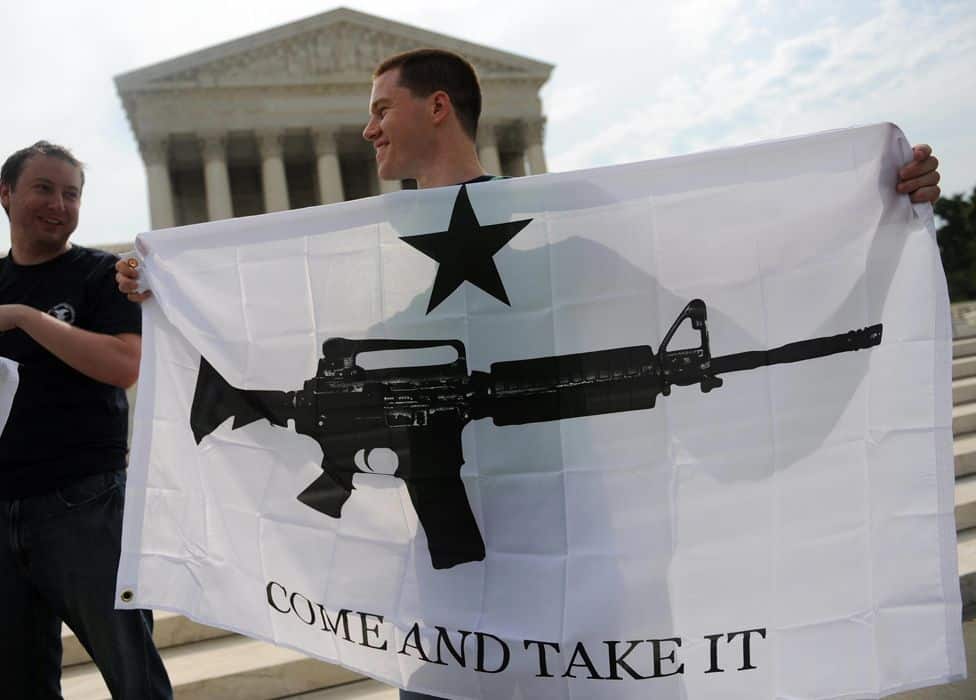 Court: The 2nd Amendment Does Not Cover ‘Weapons Of War’

Advocates of responsible gun regulations haven’t scored many political victories this century. Despite an epidemic that sees an average of 315 Americans shot every day, attempts to slow the growth of gun violence through the courts as well as the political system are continually stymied by the lobbying power of the NRA.  But a shocking decision by the Supreme Court Monday morning offers a glimmer of hope to citizens and legislators seeking to, at the very least, remove military-style assault weapons from the public. Reuters reports:

The U.S. Supreme Court, which has avoided major gun cases for seven years, on Monday declined to hear a challenge backed by the National Rifle Association to Maryland’s 2013 state ban on assault weapons enacted after a Connecticut school massacre.

By refusing to hear the NRA’s challenge, the 4th Circuit Court of Appeal’s ruling from February, which The Washington Postnoted at the time went beyond the scope of any other state law curtailing the possession of assault weapons since the 1994 Federal Assault Weapons Ban expired over thirteen years ago:

The ruling from the Richmond-based court goes further than other appellate courts that have reviewed similar laws in stating clearly that “assault weapons and large-capacity magazines are not protected by the Second Amendment.” The majority opinion, written by Judge Robert B. King, refers to the banned firearms as “weapons of war” that the court says are most useful in the military.

RELATED: Trump Signed A Bill Making It Easier For Mentally Ill People To Get A Gun

The plaintiffs in the case were bankrolled by the NRA and mounted their challenge on the grounds that it violated their 2nd Amendment rights. The appellate court rejected their claims that “weapons of war” — like the guns used in Newtown, Las Vegas, Orlando and Aurora — are granted such protection. With this decision now being the so-called law of the land, it could potentially open avenues for other states looking to protect their schools, places of worship and other public spaces.