Donald Does It Again! No Proof That Trump Donated ANYTHING To Louisiana Flood Relief 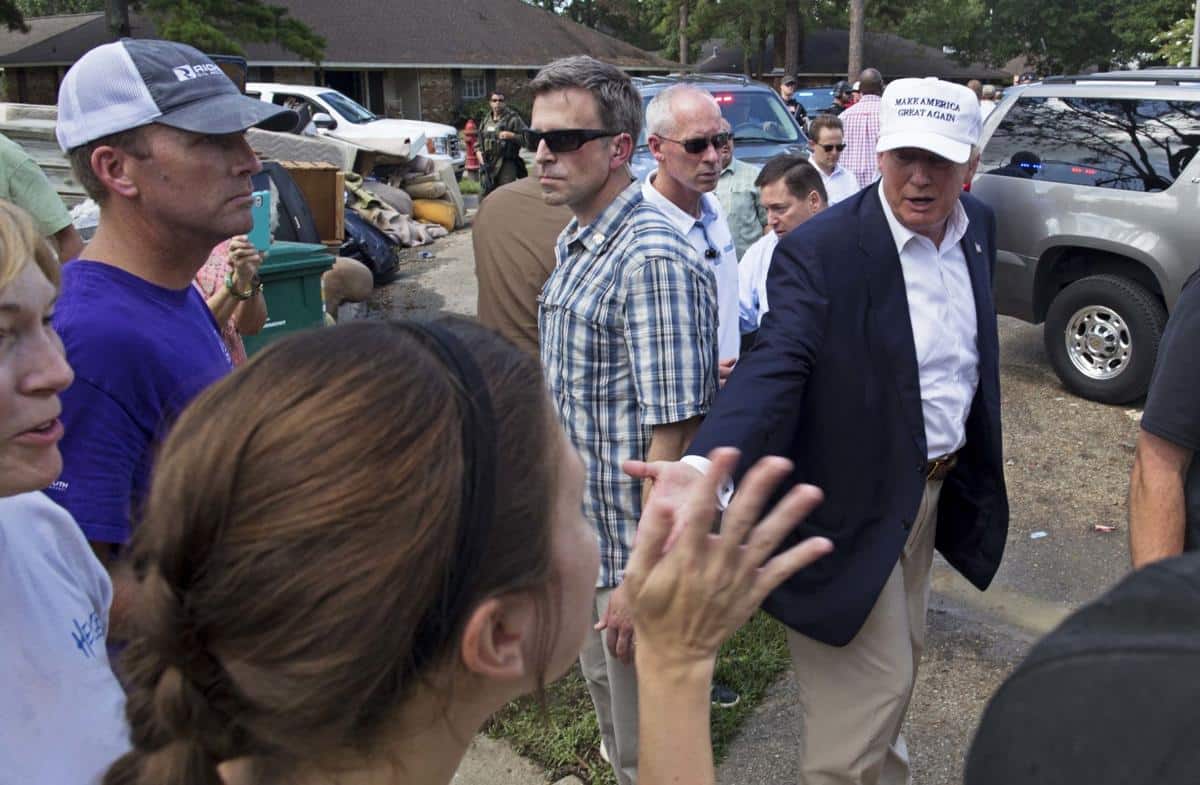 Donald Trump Should Have Stayed Home

Well, Donald Trump does it again! Or, rather, doesn’t do it again. In other words, Donald Trump said he was going to make a YUUUUGE donation to the victims of the Louisiana flood during his recent “no, this isn’t a photo-op this is me being presidential!” photo-op last week…but he hasn’t.

Wow. What a loser.

When Donald Trump made his ill-advised and unasked for trek down to Louisiana, bearing a truckload of Play Doh to people in desperate need of food and water, he promised an additional $100,000 donation. Of course, the donation was to go to a Baton Rouge church, and not just any church, but the church of anti-LGBT hate group leader Ton Perkins. Perkins is the church’s interim pastor, as well as the president of the Family Research Council, which condemns abortion, homosexuality and what it refers to as “transgenderism.”  But hey, a donation is a donation, right? Even if the money is promised to a rabid homophobic ass, it could still do some good, somewhere.

But the check has yet to arrive, and it still remains unclear whether or not Donald Trump will be donating at all.

“I’ve been told the church should [receive] it on Friday,” he wrote in an email to The Post. Perkins said he was unsure whether Trump planned to make the donation out of his own pocket, or perhaps from the Donald J. Trump Foundation — a nonprofit group that is largely filled with other donors’ money, not Trump’s own.

Hope Hicks, a spokeswoman for Trump’s presidential campaign, did not respond to questions about this promise.

What? You mean the Trump campaign isn’t shouting proof of his presidential good will from the rooftops? The Trump campaign hasn’t made the actual donation into a headline, with more photo ops?

How strange. “Many people say” that it might be because he isn’t very good at making good on his charitable promises.

And speaking of photo ops, let’s take a look at that magnificent, beneficent, charitable, heart-warming presidential act of Donald Trump donating a truckload of supplies and then absolutely killing himself with an earth-shattering 49 seconds of handing Play Doh out to flood-ravaged victims in need of necessities.

Yeah, But What About The Truck?

Only, about that truck…

No one is certain that Donald Trump even donated the supplies within it.

Trump has been credited, by both CNN and his campaign’s state director in Louisiana, with the actual donation, but no one has been able to actually confirm the details of that. And Hope Hicks, the Trump campaign’s official spokeswoman, has not responded to queries.

Mark Stermer, the senior pastor of the church that received the truckload of supplies, said that when he met with Trump, nothing was said about any supplies being donated.

“I was where Trump was the whole time, and he didn’t say one way or the other,” Stermer said.

How…unTrump-like. If there is one thing Trump likes to do, it’s brag, right?

‘No Information’ About The Truck And Where It Came From

Furthermore, the pastor said he didn’t know where he even heard that Trump was responsible for the truck. It was, the pastor says, “just an assumption.” With the pressing need of relief efforts, there has been little time spent trying to account for what was given and by whom.

“I was never told he donated [the truck]. I was just told that, ‘Hey, this truck was the truck that was coming with Trump.’ So I never heard it [as] ‘donated.”

A spokesman for Ascension Parish, said of the truck, “We don’t have any information about a donation truck that came from [Trump] directly.”

It seems unlikely that he did so. The governor’s office said it didn’t know if he donated. The Foundation itself declined to comment…and so did the Trump campaign.

Just Another Photo Op For The Reality Star Candidate

Funny how all the good, “presidential” efforts Trump makes fall apart under scrutiny. Funny, too, that a campaign that never hesitates to tout Donald’s “good deeds” has suddenly fallen silent on this front. Stranger, still, how so many of Donald Trump’s “charitable” acts all seem to be shams.

I hope Donald Trump enjoyed his photo-op in Louisiana. Because that’s exactly what it was, and all that it was – but this is what happens when a reality TV star thinks he can be president.