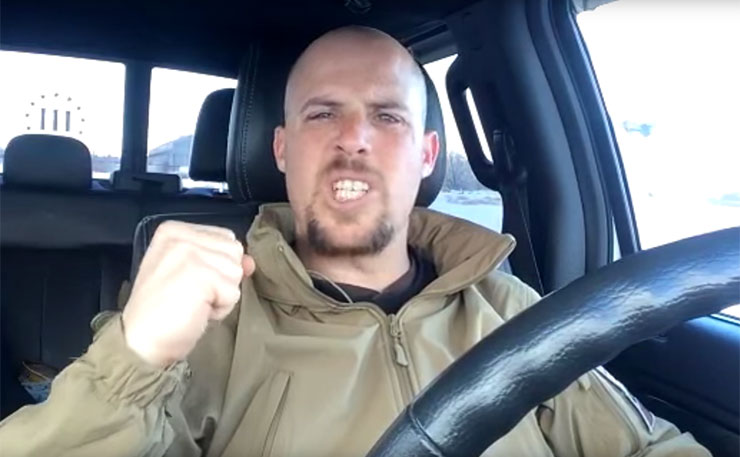 While the Governor of the state uses the Syrian refugee crisis to demonstrate his intense xenophobia by calling for a federal ban on all immigrants — ostensibly to protect the citizenry from terrorists — one of his own constituents is exporting bloodthirsty hatred across the nation. Jon Ritzheimer even goes so far as to claim support from Gov. Ducey’s office in one of his recent video uploads.

Ritzheimer has been on the radar of the FBI for some time now. In October he was rallying the “global” forces at his disposal, warning that “the likelihood for bloodletting will be high,” and calling out Nation of Islam leader Louis Farrakhan to come to Phoenix “where we’re allowed to have guns! And we’re allowed to shoot and carry them openly to protect ourselves and liberty and our pursuit of happiness!”

Nearly every reference in the media, mainstream or not, refers to Ritzheimer as an “anti-Islam activist,” sometimes referring to his ammosexual nature as well, “armed anti-Islam protestor.” But make no mistake about it: Ritzheimer is a domestic terrorist who gets off on inciting hatred and violence. This is a guy who is too extreme for the Oath Keepers, dear readers.

As my colleague, Elisabeth Parker, pointed out in a recent piece about Planned Parenthood killer Robert Lewis Dear, it is misleading at best, and mortally dangerous at worst to continue to refer to a maniac like Ritzheimer as an “activist” or “protester.” This is a man who is a former U.S. Marine, (aren’t they trained as experts in killing?), and envisions himself in the role of savior of the Constitution as part of an elite III Percent who basically search for a reason to take up arms against a government they feel is poised to take their  guns from them. To say that Ritzheimer is spoiling for a fight is putting it rather mildly.

When Ritzheimer organized a May  attack at a Phoenix mosque, he was met with by hundreds of counter-activists, led by local Anarchists, there to support the Muslim community. They lobbed verbal assaults in retaliation to the anti-Islamic hatred that Ritzheimer’s followers were spewing, and even met them physically to push back against an invasion of the haters into their cordoned section of the street. Phoenix police escorted Ritzheimer’s thugs back to the “safety” of their section of the street, but made no arrests of the 2nd Amendment worshipers, packing their automatic rifles.

So the FBI are searching for Ritzheimer now, who has dropped under the radar after a threatening video announcement, regarding a road-trip to New York to take it to the Islamic Post for referring to him as a “terrorist,” in which he brandishes and cocks a pistol. He says he’s going to stop at every mosque along the way to “flip them the bird,” but it’s becoming quite apparent he will not stop until blood has been spilled. The only thing that remains to be seen is whether that blood will be his own or his inevitable victims’.

Watch the video below to witness Ritzheimer in action and take note of the voices speaking in opposition to his message. Our nation must find a way to stop this type of hateful rhetoric, or at least disarm those who espouse it. People like Jon Ritzheimer, loose on the streets of America with weapons and inflamed with extreme hatred — there’s only one word for it: terrorism.