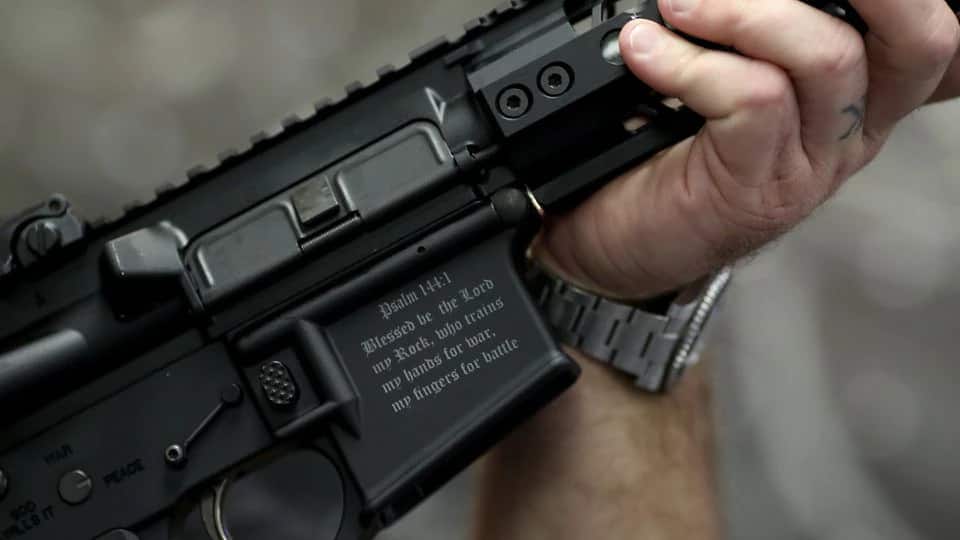 There is no denying that the Bible is an extremely violent book. In fact, there are seemingly countless murders directly attributed to God chronicled in the tome. In the book Drunk With Blood, the author Steve Wells gives an in-depth account of each of the murders with extensive lists, chapter and verse, of where each account can be found in the Good Book. From his exhaustive and thoroughly supported data, he estimates that God killed 25 million people. It’s not surprising that we’re seeing gun raffles at churches, church sponsored shooting ranges, and a proliferation of God and Guns car insignias.  Not to mention that an estimated 310 million firearms are owned in the U.S.

With this type of gory, bloody literature as their guide to life, no wonder our most gullible and fearful are so easily led. And to lead them, we have people like Ben “Mookie” Thomas, a former Navy Seal and Blackwater security contractor, and spokesman for Spike’s Tactical. Thomas said he wanted to create a weapon that no devout Muslim would dare touch. Thomas commented on his reasoning for creating the special firearm:

Off the cuff I said I’d like to have a gun that if a Muslim terrorist picked it up a bolt of lightning would hit and knock him dead.”

And so begat the AR-15 Crusader, complete with the Psalm verse etched into the magazine.  It can be yours for only $1395 and comes with a manufacturer’s lifetime warranty. You can see more details and specifications about the Crusader here at Spike’s website. It is not stated what the up charge for the lightening bolt feature is.

The Crusader also features a shield with a cross, a nod to the Knights Templar, on the left side of the lower unit, while the safety selector markings feature the words, “Peace” for safe, “War” for semi-automatic, and “God wills it.” for mass mayhem. On the reverse side of the safety selector are the Latin translations of those words, Pax Pacis, Bellum, and Deus Vult.  It is nice to know there are so many Floridian  gun collectors who speak Latin. Maybe they’ve been underestimated.

“Right now and as it has been for quite some time, one of the biggest threats in the world is and remains Islamic terrorism. We wanted to make sure we built a weapon that would never be able to be used by Muslim terrorists to kill innocent people or advance their radical agenda.”

Excuse me, WHOSE radical agenda?

When informed about the Crusader, a spokesperson for the Florida chapter of the Council for Islamic Relations remarked:

“Sadly, this manufacturer’s fancy new gun won’t do anything to stop the real threat in America: the escalating problem of gun violence. This is just another shameful marketing ploy intended to profit from the promotion of hatred, division and violence.”

This is the same group that filed a federal lawsuit against a Florida gun store that declared itself a “Muslim-free zone.” In addition, the parent organization has asked the Department of Justice to address the growing number of “Muslim-free” businesses“.

If only God wasn’t portrayed as having dissociative identity disorder. It’s very difficult to determine which alter to quote. Murderer, vengeful God or loving, forgiving God.

But if the benevolent God is quoted, this might be a better Bible verse for those who wish to own a Crusader. Just a suggestion.

“And he shall judge among the nations, and shall rebuke many people: and they shall beat their swords into plowshares, and their spears into pruninghooks: nation shall not lift up sword against nation, neither shall they learn war any more.” (Isaiah 2:4)

What a spoilsport God can be.