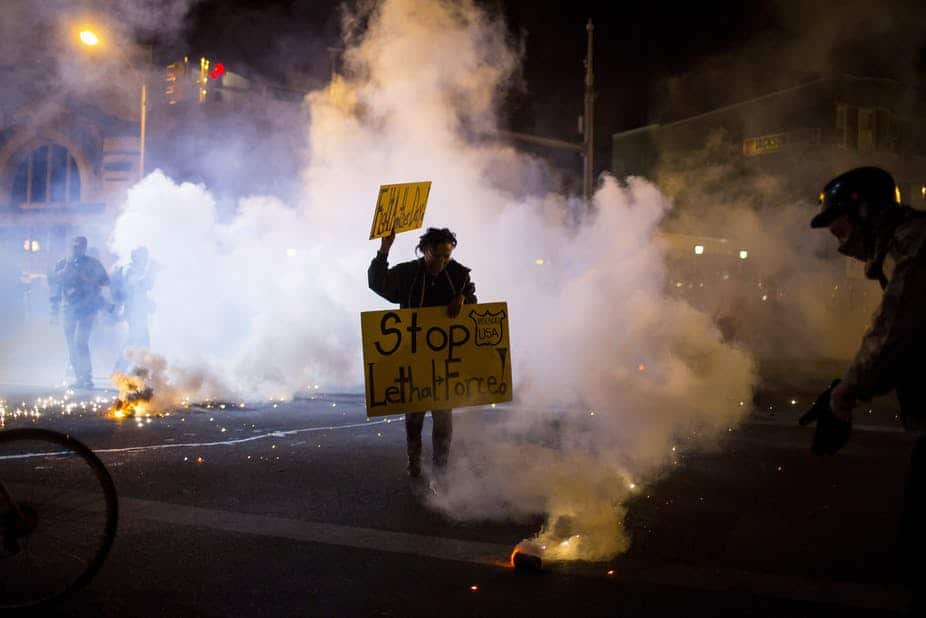 Two of America’s most dominant mainstream news sources, the New York Times and CNN, can’t seem to get Baltimore right. CNN has been dinged for covering the Baltimore unrest much like it covered Ebola and the disappeared Malaysian airliner last year, with vapid sensationalism. CNN variously wondered why there weren’t more police where CNN happened to be filming, and lingered on long shots of buildings on fire, with barely concealed pyromania. The New York Times’ initial coverage focused almost exclusively on reporting officials’ and police’s version of events. This seems particularly daft in context, since the inexplicable death of Freddie Gray in Baltimore police custody was the spark that lit this powder keg. The police are not neutral observers in this case, and treating them that way is poor journalism.

United Kingdom media to the rescue! If the American media can’t or won’t figure out what the heck is happening in the United States, maybe it’s a lot clearer to some British journalists. Americans are lucky that English is such a ubiquitous language throughout the world. It makes it relatively easy to find out what other countries are saying about us. When cops whoopsie-kill an unarmed black man handcuffed in the back of a van, and the streets rise up, a foreign analyst’s point of view can be a painful but necessary reflection. British media are often great sources of information for events in America. They arguably understand our culture better than anyone except Canada, but they’re culturally distinct from us enough to have a detached take. Their serious publications have some of the most insightful journalism in the English-speaking world.

The Economist, a British business and politics news magazine has great in-depth analysis and opinion on a broad range of topics. Its writing is terrific and its politics are centrist. The magazine endorsed Barack Obama twice, and conservative David Cameron in the UK. An Economist article titled “It’s chaos,” written by D.K., with a dateline in Baltimore, described the scene,

WHAT is happening tonight in Baltimore is perhaps best described not as a riot but as anarchy. Though there are police lines, there are few protesters or people fighting the police or hurling stones. Indeed, where the police are lined up, the people standing around are mostly taking photos on their phones. Drive a few blocks in any direction, though, and suddenly it feels lawless. Groups of young men, boys really, wearing bandanas and hoodies, stand on street corners next to derelict buildings, staring at anyone passing, and occasionally throwing projectiles at cars. Young women hurry home carrying bags of stolen loot: food, clothes, and bottles of beer and liquor. On the occasional street here and there cars burn freely. Shops, of which there are not many in this abandoned corner of the inner city, are ravaged, their windows smashed, their shelves picked over. Cars hurtle through red lights at high speed, music blaring, boys leaning out of the windows. And everywhere the intense smell of smoke and the buzz of helicopters overhead.

The article invokes the ravage of the Great Recession and the dramatic social and economic inequality in the city. The writer describes a sense that the city was already tense, focusing on the sense of lawlessness that pervades the riots. D.K. concludes by pointing out that the police are at least partly responsible for that anarchy,

The bigger problem for Baltimore is that lawnessness is not limited to nights like tonight. As one young woman standing taking photos said to me, West Baltimore is “always like this. Well not like this, but you know, shootings”. This is a city where a young black man is killed almost every day—not by police officers, but by other young black men. The failure of the police in this city is that they cannot enforce the law even at the best of times. At their worst, as the death of Mr Gray seems to suggest, Baltimore’s police are simply another source of the lawlessness.

The Guardian, a progressive UK newspaper that has grown rapidly online in the US in recent years, published a detailed report on the situation. The report seamlessly integrated the particulars in Baltimore with the larger national movement. It strongly implied that this could be a watershed moment. The police in Baltimore told the Guardian they were “outnumbered” and “outflanked” by protesters, as “embattled” Baltimore officials were unable to explain how Gray suffered his injuries, and struggled to respond to the growing protests,

As heavily armed soldiers continued rolling into the city in armoured vehicles on Tuesday, embattled authorities in Baltimore were struggling to control a growing crisis in their city, long notorious for urban blight and accusations of police brutality.

The article emphasizes that “troops” were “rolling in” to Baltimore, and quotes the Maryland National Guard commander splitting hairs about the meaning of martial law. It quotes President Obama making some of his ardent comments to date about police abuse and civil rights protests. The article emphasizes apparent poor decision-making by police which exacerbated the situation, including stranding school kids after closing down public transportation, and then leaving 80,000 students with nothing to do after closing schools.

Finally, The Telegraph, one of the more conservative mainstream British news sources, treats the protesters with a healthy dose of skepticism. An article written by Raf Sanchez, hews close to the American right’s depiction of how the riots started,

The violence began on Monday afternoon after a widely-circulated social media post called for “a purge” by young people against police. The post was a reference to the 2013 horror movie The Purge, which portrays the complete collapse of society.

By the early evening looting and disorder had spread across the western half of Baltimore and authorities declared a state of emergency in the city.

Gangs of youths in hoods and masks raced through the streets in the back of pick up trucks while at least one rioter used a knife to slash through a fire hose as the fire brigade struggled to contain a burning pharmacy.

Mother Jones has disputed the “purge” story with a number of eye-witness accounts. But there is video of a masked rioter slashing a fire hose with a long knife.

Sanchez also prominently featured a man who stood outside a bar where he worked holding a machete to deter looters,

“Forget the law when the law can’t protect civilians. This is kind of all-out war,” he told The Telegraph.

The article also pointed out that, while some locals didn’t support the violence, they also didn’t condemn it,

“No one has ever listened to peaceful protests so maybe this will get their attention.”

Sanchez concluded by highlighting volunteers cleaning up their neighborhoods in the morning following the riots.

It’s clear that the range of British media has biases like American media. The Guardian takes a decidedly liberal approach, underlining the protesters’ grievances, the president’s growing support for them, and the failings of local officials. The Telegraph is more conservative, placing blame on “gangs of youths” for sowing chaos and resorting to violence. The Economist is more holistic, and looks at how systemic pressures affect individuals and the situation. Their biases generally seem less pronounced than their American counterparts, and their analyses of the situation a bit more clear-eyed and pertinent than some mainstream American media. When the American mainstream media falls short, British journalism is often the best source for understanding what is really happening in the United States.