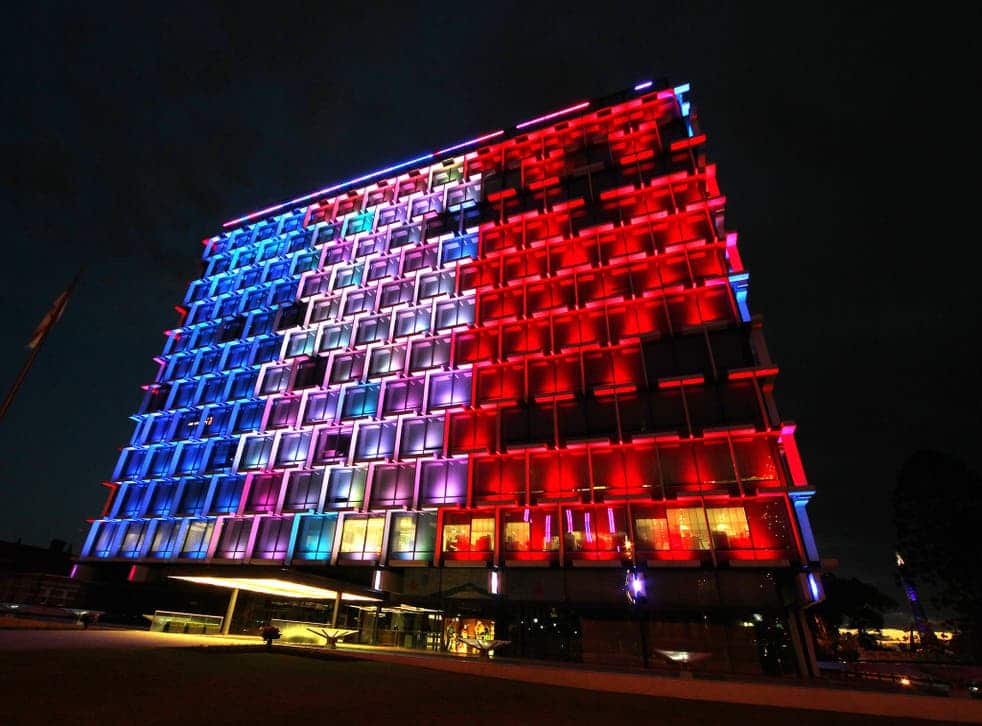 “When my people died, no country bothered to light up its landmarks in the colors of their flag,” Elie Fares, seethes on his blog, A Separate State of Mind. The physician from Beirut, Lebanon was referring to Thursday’s deadly terrorist double-suicide bombing attacks, which left 43 dead and at least 239 wounded in his city. Buried deep within the recesses of their website, CNN reports:

The explosions detonated within 150 meters (490 feet) and five minutes of each other, Lebanon’s state-run National News Agency said, shaking an open-air market and other parts of the Bourj al-Barajneh district in southern Beirut. […] “There’s a lot of shattered glass on the street, a lot of blood, and it’s really just a scene of chaos and carnage,” journalist Tamara Qiblawi told CNN shortly after the blasts.

Since that report, ISIS announced that they were responsible for the attacks. The damage would have been far worse had it not been for a quick-thinking hero who died while stopping a third suicide bomber. Adel Termos was out and about with his young daughter when he spotted him. Elie Fares reports:

“He [Adel Termos] tackled him to the ground, causing the second suicide bomber to detonate. There are many many families, hundreds of families probably, who owe their completeness to his sacrifice.”

So where’s the mass news coverage? Where are the tears and outrage? Where are the Facebook “Safety Check” and Lebanese flag overlay features? Maybe we just assume these kinds of things are supposed to happen in places like Beirut, Lebanon. Or we just don’t care as much about the mostly-brown people who live there as we do about our long-time allies in Paris, France. As tech journalist K T Bradford snipes in a pointed Tweet:

Dear Facebook: Nice French flag overlay. But how do I change my profile picture to show solidarity with the people of Beirut?

An outraged Elie Fares continues, in vain hope of being heard over the media’s deafening silence on the Beirut, Lebanon terrorist attacks.

“When my people died, they did not send the world into mourning. Their death was but an irrelevant fleck along the international news cycle, something that happens in THOSE parts of the world.”

We still think of Beirut, Lebanon as a war zone where Islamic terrorists run amok. But although Lebanon’s government is corrupt and ineffective, and despite the continued popularity of the Shiite militia group Hezbollah, this isn’t true. ISIS has very little presence in Lebanon, both Muslims and Christians hold positions of power, and — as pointed out by the New York Times — they haven’t had a bombing this deadly since their civil war ended back in 1990:

Some blamed news coverage for the perception that Beirut was still an active war zone. They cited headlines — including, briefly, a Times one that was soon changed to be more precise — that refer to the predominantly Shiite neighborhood where the bombing took place as a “stronghold” of the militia and political party Hezbollah.

Terrorism In Paris And Beirut? We Built That.

Nour Kabbach, a Syrian refugee and humanitarian aid worker in Beirut, also calls B.S. on the hypocrisy of the U.S. and other Western nations in an impassioned Facebook post:

We and our European allies bear a lot of the blame for the unrest, instability and terrorism that plagues the Middle East as a result of our own foreign policy. Our long history of colonialism, exploitation, destruction and regime change have created too many desperate people who’ve got nothing left to lose. To paraphrase Martin Luther King, riots and terrorism are the “language of the unheard.” And now, these latest acts of terror in Paris may make matters worse for the people we continue to victimize, by causing us to close our borders to the endless waves of terrified refugees.

If we truly want to fight terrorism, then we need to give all the non-terrorists who live in — or are fleeing — these unstable countries all the love, support, humanitarian aid and economic assistance we possibly can provide.

Here’s the report on the terrorist attack in Beirut, Lebanon from CNN.