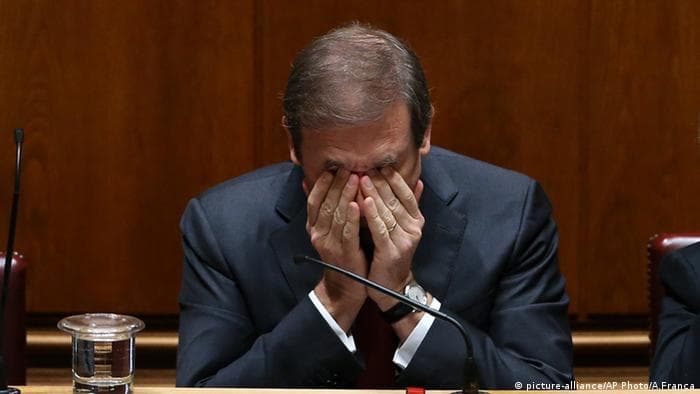 It was only 12 days ago in which Pedro Passos Coelho was sworn in as the Prime Minister of the new Portuguese government after the October 4th elections. He came into office uncertain of his future, with his party no longer in the majority after an election day rout that gave enormous gains to Socialist and Communist parties. His future was set however when it was announced that the far-left parties had united against him.

The new Communist/Socialist government has already garnered substantial opposition from business leaders, with an open letter expressing their fears over no longer being able to ride the austerity gravy train. After all, without austerity, how else can big businesses force government concessions? The rise of the Communist block within Portuguese politics should warn these businesspeople that it may not be wise to continue trying to push their weight around, for now the government regulation awaiting them has no fear of shutting them down completely.

The new coalition is formed by the Socialist, Portuguese Communist, Left Bloc, and Green parties, giving them 122 out of 230 parliament seats, a solid majority. When the Green Party is the most conservative of the entire coalition, the field has changed not only in Portugal but across Europe. In many ways, Portugal is the canary in the coal mine for those who continue to pursue an Austerity program. While Portugal has stabilized its economy, the European Union still is pushing for severe austerity cuts from Lisbon.

With the new government in place, one that is not only unbeholden to big business but adamantly against it, the stage is set for the real test of the Eurozone. The leader of this coalition, Antonio Costa, campaigned on reducing austerity, and the other members of this coalition have made calls for positions such as nationalizing the nation’s banks and energy firms to address the continuing Eurozone financial crisis.

This political upset is now the second major Communist victory this month after Nepal elected its first female President. With the 98th anniversary of the Bolshevik revolution this weekend, it looks as if the Hammer and Sickle, rather than being buried and forgotten, are reasserting themselves. With the oppression of the business elites and the failure of liberal democracy in the face of wealthy oligarchs, the resolve of the Communist Party worldwide appears to be making itself known.

With Communist ideology in the halls of power in Europe for the first time since the collapse of the Soviet Union, we just do not know what will happen. What we do know is that, in those famed words that began a revolution, “Ein Gespenst geht um in Europa – das Gespenst des Kommunismus.”

A spectre is haunting Europe – the spectre of communism.