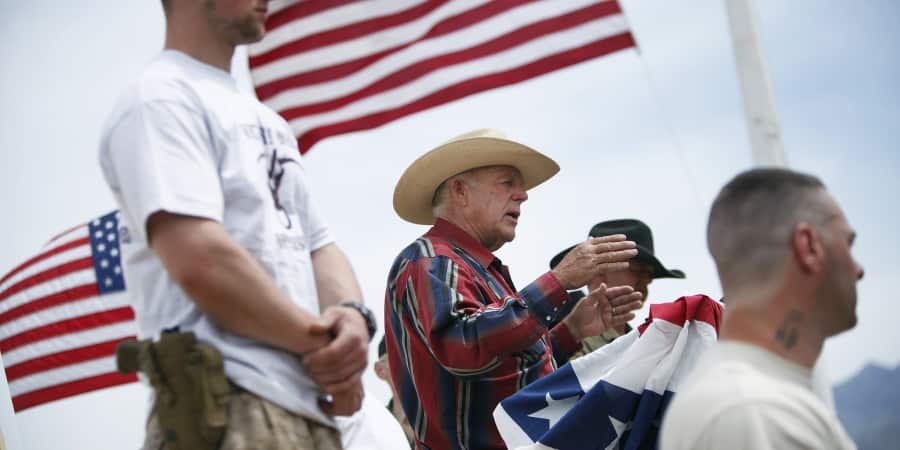 With all the good news for progressives handed down by the Supreme Court last week, one news story that slipped under the radar was the return of Nevada rancher Cliven Bundy to our consciousness. You may remember the scene at the Bundy Ranch last year when armed radicals and wanna-be domestic terrorists crawled out from behind the tumble weeds and slithered from beneath the rocks to defend this moocher’s theft from the American tax payers. Rather than having another Waco on their hands, the Federal Agents stood down. Tea Partiers and other anti-government types celebrated this as a victory against big brother.

“Cliven Bundy has had multiple court orders to remove his cattle from federal public lands and he has not paid his grazing fees and he has not abided by the law. We will continue to pursue that. The wheels of justice move at their own pace. I am confident this issue is going to be resolved.”

Bundy is the type who believes he is completely self-made and self-sufficient. In his view, he is the rugged Westerner living on his own terms, by his own rules. He feels so strongly about this that for two decades now he has been grazing his cattle on land that belongs to the Federal Government.

Although Mr. Bundy has lost every court case regarding this matter, he continues to deny the authority of the Federal Government and insist on playing the victim of the big government bully. The websitefactandmyth.comcontains a very detailed account of the true story about Bundy and his fight with the US Government, including the following.

A recent confrontation between federal (BLM) employees and protesters over the attempted confiscation of cattle (belonging to rancher Cliven Bundy) that had been grazing on federal land (illegally, going on 20 years now) has made its way into several news outlets. The usual suspects have turned this into some Orwellian takeover and suppression of civil liberties, along with alleged backroom deals involving Harry Reid and Chinese solar farms. A basic fact check reveals that reality is more benign and less dramatic. Rather than taking the time to learn about and explain the history, structure and legal mandate of the BLM, as well as the multiple court cases Bundy lost and complaints from other locals and environmental groups (often confusing and overlapping) over Bundy’s trespass cattle, many ideological opportunists have seized this opportunity to portray the BLM as some shadowy organization trampling a rancher’s rights.

Cliven Bundy owes the Federal Government over one million dollars in fines and fees. That money belongs to the average tax payer, the working class people who do not have the advantage of tax lawyers or lobbyists. Bundy is nothing more than a freeloader who is not paying his fair share to our country. Let’s hope the wheels of justice leave Bundy just as flat as a road side armadillo.