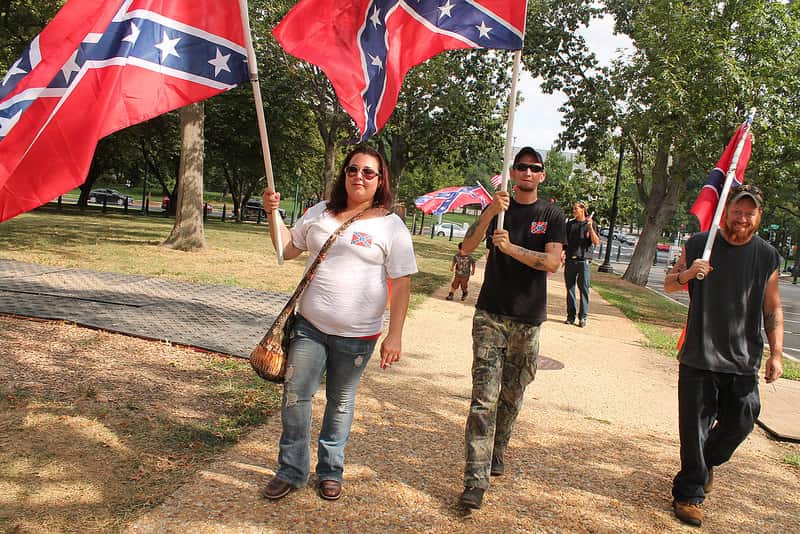 When a conservative, white, South Carolina lawmaker says it’s time for the confederate flag to go, it’s also time for the state and the nation to sit up and take notice. And yes, that’s ‘confederate’ with a small ‘c’, because it deserves neither dignity nor respect.

“I had a friend die Wednesday night for no reason other than he was a Black man.”

That is an honest assessment of the death of Rev. Clementa Pinckney, as well as of the eight others who died alongside him. Their deaths were due to the hate, ignorance, and evil that resided not just in the heart of one solitary white man, but in the hearts of many — far too many — other white people. The confederate flag is a flagrant symbol of that hate, ignorance, and evil which are protected beyond all rationality by Southerners who choose to cling to an ignoble past.

Those who, like Sen. Lindsey Graham (R-S.C.) and Governor Nikki Haley, defend that symbol are also glorifying treason, slavery, racism, and hatred. It can’t be done without making obvious the fact that the defenders are also ignorant, evil, hate-filled relics from the past.

It’s time the rest of the country stopped accepting their excuses about their ‘heritage’. Their true heritage is this reality: they are part and parcel of the United States of America — whether they, or we, like it or not. Their confederate flag has not one shred of nobility or respectability about it.

Sen. Brannon, at least, has had enough. He has experienced what it takes to really motivate change: the biting, bitter loss of someone he loved. In December, before the South Carolina legislature reconvenes, he will pre-file a bill requiring the removal of the confederate flag from state house grounds.

When asked if he thought others were feeling the same way, Brannon said:

“I know a lot of people are… I, I …don’t know … I mean … I want you to understand that I’m very upset about the death of my friend and his eight dear friends.”

And therein lies the rub.

Black people have been dying for no other reason than they’re black for as long as America has existed. Their friends, relatives, neighbors, co-workers have also been ‘very upset’. But until white people are personally, painfully touched, they are willing to let that damnable, star-crossed flag continue to fly — to wave in our faces, mocking everything this country is supposed to stand for.

Cornell Brooks, president of the national NAACP, was more emphatic in a news conference on Friday:

It is not going to happen, now, without white support. Of the 170 lawmakers in South Carolina’s General Assembly, only 39 are black. Other white voices are being raised in opposition to the flag, however. White Christian Southerners are a good place to begin because the Christian tradition is strong in Southern black communities, as well.

Russell Moore, president of the Ethics and Religious Liberty Commission of the Southern Baptist Convention, issued a statement that said:

“The Confederate Battle Flag may mean many things, but with those things it represents a defiance against abolition and against civil rights. The symbol was used to enslave the little brothers and sisters of Jesus, to bomb little girls in church buildings, to terrorize preachers of the gospel and their families with burning crosses on front lawns by night.

“That sort of symbolism is out of step with the justice of Jesus Christ. The cross and the Confederate flag cannot co-exist without one setting the other on fire. White Christians, let’s listen to our African-American brothers and sisters. Let’s care not just about our own history, but also about our shared history with them.”

Others are ready to seize control over the kind of symbolism that the confederate flag should now represent. A Facebook effort is coalescing around an event called “National ‘Burn the Confederate Flag’ Day”  — to take place on June 27th.

People are tired — sick to death — of the evil inspired and perpetuated by the confederate flag. If their reaction is purging by fire, the only question is — what took so long?

Anti-Intellectualism And Willful Ignorance In America: The Root Of All That Is Evil