Michelle Manhart “Flag Save” Also Posed Nude With it

By now you’ve undoubtedly heard the story of Michelle Manhart, the conservative “hero” who was recently detained by police after trying to save an American flag from being desecrated by protestors. You may have also heard that she was once in the military but quit after being punished for posing nude in Playboy. What you may not have heard about, though, is her own history of flag desecration.

For those who have yet to hear the story, Michelle Manhart, a veteran of the U.S. Air Force, was tipped off that protestors at Valdosta State University in Georgia were trampling the American flag into the ground as part of a protest. Being the heroic former soldier she is, Manhart just had to show up and save the flag.

Unfortunately for this conservative crusader, the flag actually belonged to the protestors, and when police demanded she return it, she refused. This led to her being taken to the ground and temporarily detained. The protestors also got their flag back. Since then, people have taken to Manhart’s Facebook page to congratulate her and even post links to the United States Flag Code to prove she was doing right.

Obviously, they didn’t see this picture before doing so: 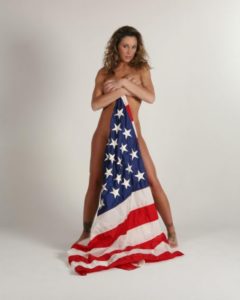 This is a photo of Michelle Manhart posing nude with the United States flag. You’ll notice that the flag is dragging the floor. Keep in mind that Manhart is no rookie when it comes to posing nude. In fact, it’s part of the reason she’s no longer in the Air Force.

After posing in her uniform and nude for Playboy in 2007, she was demoted for violating the standards expected of military personnel. Instead of accepting this demotion, she decided to quit. So this conservative hero decided to pose nude in her uniform, knowing she’d likely face repercussions, and then turned her back on her country and service instead of facing the consequences of said actions.

Let’s make this clear: this is no form of “slut-shaming.” Michelle Manhart is perfectly capable of making her own decisions when it comes to her body. The irony, though, comes into play when you consider her actions of “saving” the flag, the previous picture of Manhart, and the U.S. Flag Code, which says this:

“The flag should never touch anything beneath it, such as the ground, the floor, water, or merchandise.”

As you can clearly see, Manhart has the flag dragging the floor in this picture. Don’t worry, though; the Flag Code fun doesn’t stop there:

Well, she’s got the whole “letting the flag fall free” thing covered, but it seems as if that’s all she’s got covered. Literally and figuratively. She’s again violating the Flag Code. Sure, it’s hard to say that she’s using the flag as a form of apparel, but if nothing else, she’s definitely using it as drapery. And only drapery.

She also posed for a PETA campaign for this titillating photo, which again shows her using the flag as a form of “clothing”:

Whether or not she was out of line in taking the flag that day is up for debate. What we’re focusing on now is how conservatives have quickly latched onto her and turned her into their hero of the moment. They did this with Hobby Lobby Holly, shortly before she was exposed as cheating on her veteran husband with a Tea Party leader.

They also did this with Cliven Bundy, shortly before he became less than covert about his racism. Thinking back, they even latched onto Sarah Palin shortly before it became apparent that she had no idea what she was doing and was promoting abstinence even as her teenage daughter was pregnant out of wedlock.

Holy crap, conservatives. You’ve REALLY got to start vetting your heroes better. Actually, why bother? It’s not as if their exposure as hypocrites ever dissuades you from drooling whenever you hear their names.

Here’s the video of the flag incident with Michelle Manhart:

Here’s the video with her and her other, um… flag incident:

While Michelle Manhart did pose in Playboy, it appears as if these images are from her PETA campaign.