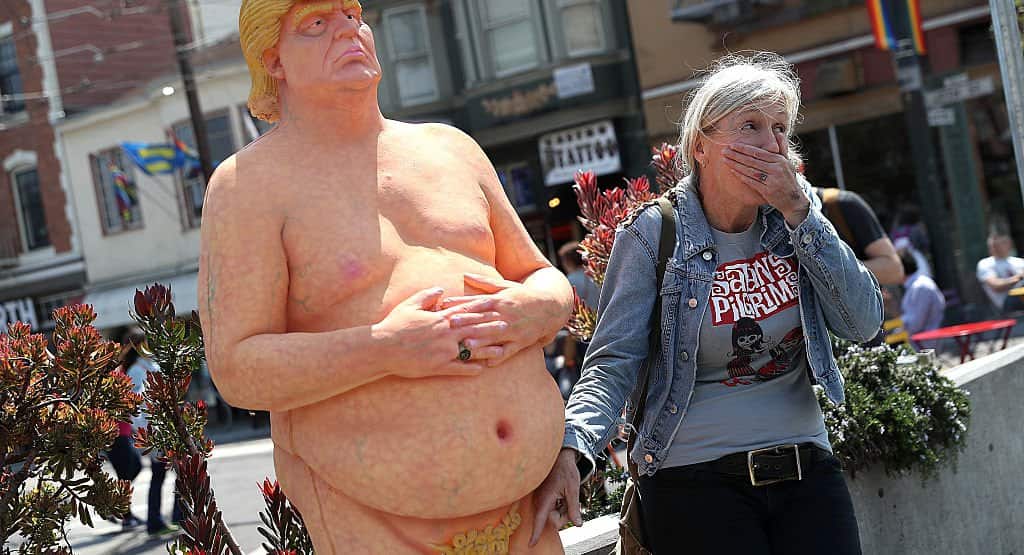 Donald Trump, In The Flesh

The New York City Parks Department had the best response ever to the sudden appearance of a giant, naked Trump statue in their park.

In case you missed it, poor, unsuspecting New Yorkers were visually assaulted by questionable artwork – nude sculptures of Donald Trump, baring it all. There were no details spared. Well, there was one detail we were spared, but it was deliberate.

Trump certainly looks statuesque in the detailed rendering. His face is composed and serious, which is no mean feat, considering he’s completely naked and obviously really does have plenty for which he needs to – uh- compensate.

The plaque at Trump’s feet reads, simply, “The emperor has no balls.”

And it’s true. The statues of the GOP candidate certainly lack plenty in that particular department, despite Trump’s own assurance that he’s more than adequate in that area. But New Yorkers were able to move about their city freely by 1:20 today, when the obscene (and obscenely funny) statue was removed from Uniion Square by the NYC Parks Department. But the NYC Parks Department still managed to deliver a crushing blow to Donald Trump and his giant ego – as well as his tiny penis.

Naked Trump Showed Up Across The Country

The sculptures went up across the United States. In addition to those found in New York, identical sculptures were also spotted in Los Angeles, San Francisco, Cleveland and Seattle.

The art is signed by Indecline, which is, as the Huffington Post reports, “the name of an anonymous anarchist street art collective.” It was a Las Vegas-based artist by the name of Ginger who was commissioned by the collective to create the work.

Indecline felt like he was the perfect choice for the project. Why? Because he has experience in constructing  monsters.

“When the guys approached me, it was all because of my monster-making abilities. Trump is just yet another monster, so it was absolutely in my wheelhouse to be able to create these monstrosities.”

To create the naked, ball-less Trump, Ginger used 300 pounds of clay and silicone, complete with what he described as a “constipated look.”

As for the complete lack of testicles, Indecline was open about their own motivation, and how they reached the decision.

“We decided to depict Trump without his balls because we refuse to acknowledge that he is a man. He is a small arrogant child and thus, has nothing in the way of testicles.”