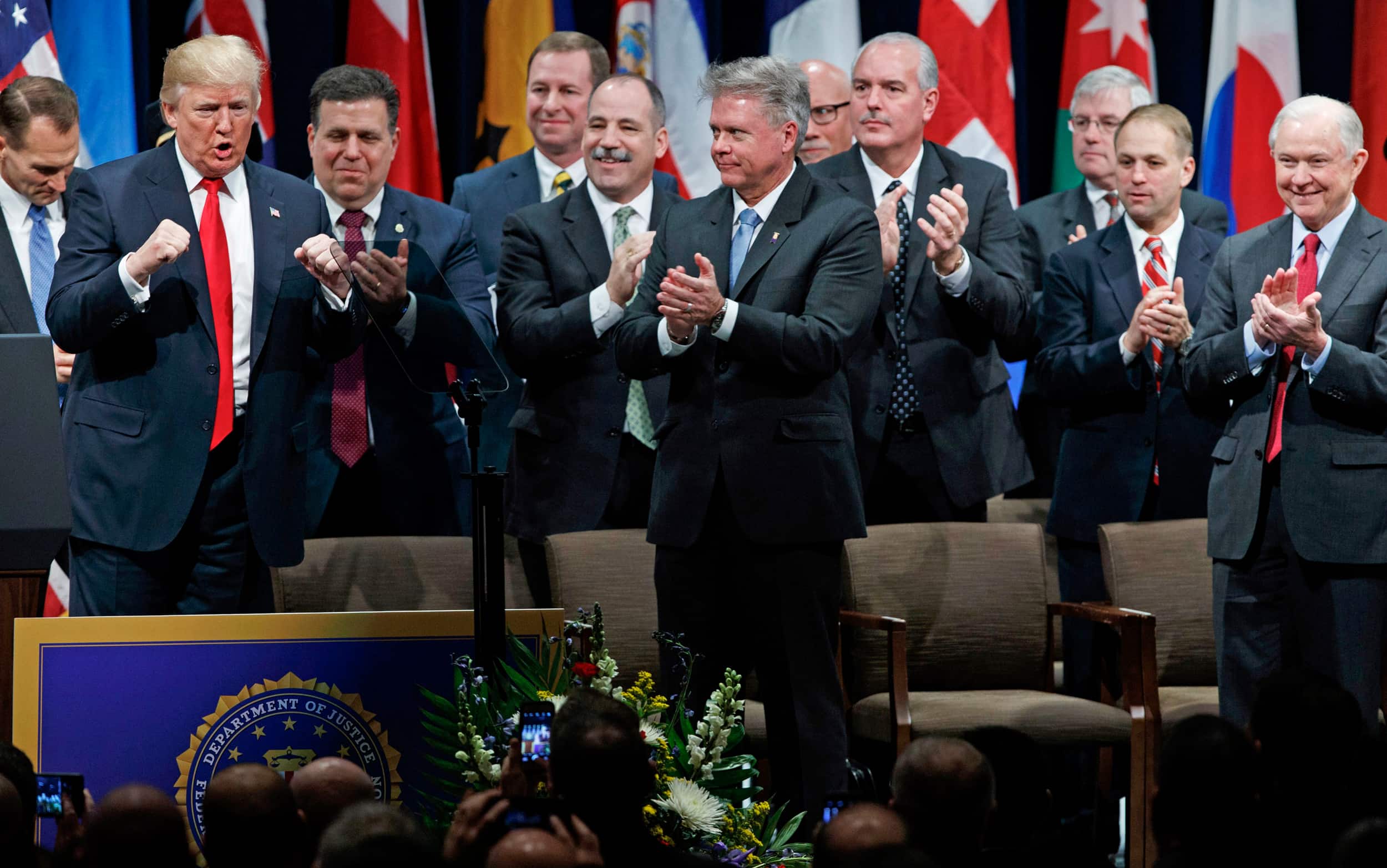 Trump Has A Strange Way Of Showing Respect For Law Enforcement

On December 7th we reported on a video that surfaced showing Jeff Sessions advocate for the reintroduction of old school, oppressive policing methods like broken windows. This is not surprising from the Attorney General who was serving as a campaign surrogate when then candidate Trump was saying that in the good ‘ole days protesters would be carried out on stretchers, and inciting violence at his rallies. And it’s worth noting that both Sessions and Trump grew up in an era where those kinds of unregulated actions were tragically common. And that both men have a history of racist statements, which makes their support of authoritarian policing of poor and ethnic communities of the sort proscribed by policies like “broken windows” policing, makes perfect, terrifying sense.

Trump himself has not had a good record on this topic. Back in July, Trump said that police officers should not have to worry about injuring suspects during arrests. These more Draconian views evidently extend only to state and county level troopers as, at the federal level, Trump has shown nothing but disrespect for the FBI. Talking to reporters on the White House lawn, Trump spoke about the recent revelation that a couple members of Robert Mueller’s Special Counsel had made a negative comment about him.

Rather than recognize it as an isolated incident, Trump made a broad strokes claim about the FBI as a whole, saying that it was full of animosity:

“It’s a shame what’s happened with the FBI. But we’re going to rebuild the FBI; it’ll be bigger and better than ever.”

“You have a lot of angry people. It’s a very sad thing to watch, I will tell you that. I am going today on behalf of the FBI, their new building, and when everybody — not me, everybody, the level of anger, and what they have been witnessing with respect to the FBI, it’s certainly very sad.”

Of course, to anyone paying attention, Trump’s animosity to the FBI is all about the domestic intelligence agency’s investigation into Russian interference in the election that elevated Trump himself into the Presidency. The agency is digging into possible collusion by President Trump, members of his family, campaign, transition team, and administration. An investigation which Trump doesn’t seem to appreciate, to put it mildly.

Trump made relations between the White House and the FBI even tenser by firing then Director James Comey, who is well respected in the agency. According to testimony by Comey, Trump asked him to go easy on Mike Flynn, his former National Security Adviser, who has since plead guilty to lying to the FBI, after retroactively registering as a foreign agent. Comey refused, making a memo of the conversation, and was soon fired. Trump later acknowledged in a televised interview with NBC’s Lester Hold that he did indeed fire Comey over the Russia investigation, and later still admitted on Twitter (in a tweet he now blames on his attorney) that he knew Flynn had lied to the FBI when he fired Flynn (despite the fact that Flynn resigned).

Of course, all of this has blown up in the President’s face, because now he faces not only the FBI’s continuing investigation, but a parallel investigation by former FBI Director Rober Mueller, who has been named Special Counsel, and is perhaps the only living figure who rivals Comey for respect as a dogged investigator among the law enforcement community, chiefly at the FBI. Worse yet, Trump’s firing of Comey, among other actions to impede and cast doubt on the Russia investigation, has led to a likely slam dunk Obstruction of Justice case (which, like treason, is also an impeachable offense) against the President by the Special Counsel, who is empowered to take his investigation wherever it leads.

Already several figures from Trump’s inner circle are being prosecuted, and appear to be cooperating with investigators, including Mike Flynn, former Trump Campaign manager Paul Manafort, and George Papadopoulos, who now appears to have been rather more than just the “coffee boy” Trump’s administration has pretended he was.

Related: RIP: Freedom Of Speech – Trump Administration Kills Internet As We Know It

The irony of Trump’s continued acrimony towards the FBI is his otherwise blatant advocation for all forms of law enforcement, and the more draconian and authoritarian, the better. About an hour after the aforementioned impromptu Q&A on the White House lawn, Trump spoke at a gathering at the FBI Academy. And he proudly crowed about reversing the Obama Administration’s ruling to roll back the militarization of police forces in America by ending giveaways of military surplus weapons and gear to local police departments.

Going a little further, the President went on to rhetorically challenge anyone in the audience to explain to him why that decision was even made by Obama. Of course, to anyone not watching Fox News 8 hours a day, it’s obvious that the answer to that question is that Obama took action on police militarization after the display of martial force in Ferguson, Missouri amid the early Black Lives Matter protests. Unfortunately for America, no one in the crowd was brave enough to answer his blindly racist stupidity with those facts.