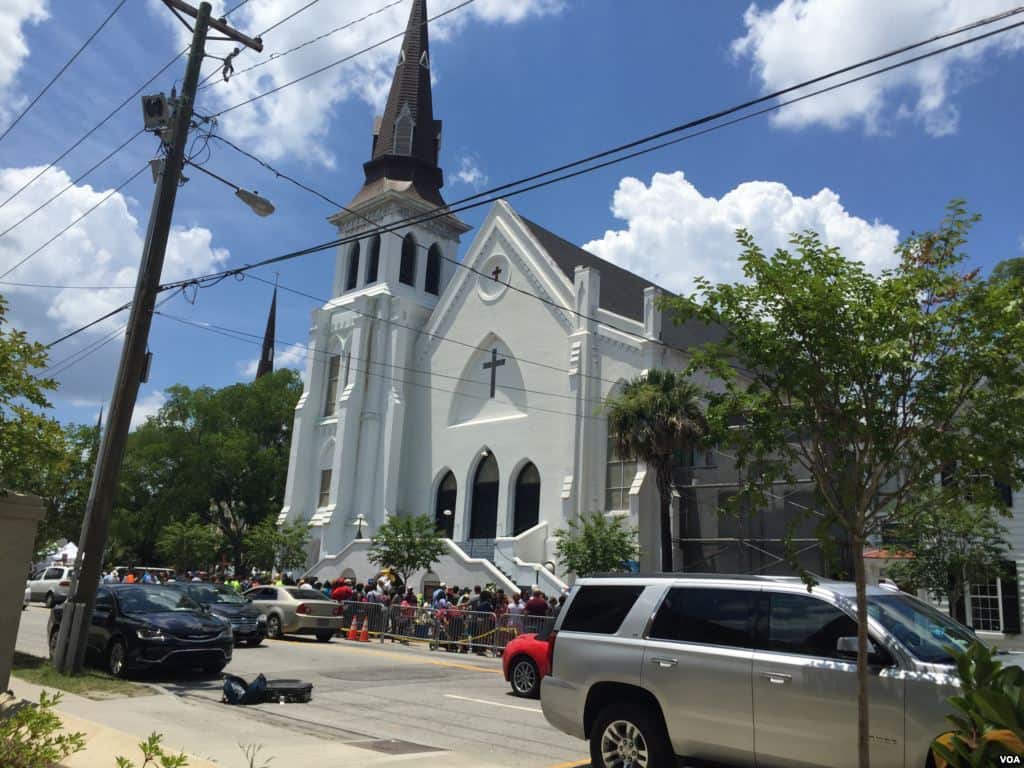 It is difficult to exaggerate the symbolic importance of Emanuel African Methodist Episcopal Church in Charleston, South Carolina for the history of black folks in America. The church “houses the oldest black congregation south of Baltimore.” For two centuries, the congregation has been a bellwether of the black experience in America from slavery through segregation and Civil Rights, and into the present.

Its founder, Morris Brown, was one of the first ordained pastors of the AME denomination, founded in 1816 in Philadelphia. Upon his return to Charleston, he started a branch that quickly changed the social and religious landscape of the city. Within two years, more than three-quarters of black Methodists in the city—more than 4,000 people—had left their segregated denominations to join the AME church.

Now home to huge chunks of Charleston’s black population, Brown’s church was soon a site for organizing and anti-slavery activism. One of its earliest members was Denmark Vesey, a free black carpenter who preached a message of liberation. In 1822, he and other leaders plotted an uprising, drawing thousands—slave and free—into a plan to secure arms, commandeer ships, and kill slaveholders.

Vesey got involved in this plot after considering moving to Africa. Although he had purchased his own freedom with a winning lottery ticket, he still had a wife and sons in slavery, and decided to stay to try to make something happen for his family. He paid for it with his life. The planned uprising was ratted out, and Vesey and 34 others were executed. The church was burned to the ground, the congregation scattered and exiled from South Carolina. In the following decades, the congregation reorganized underground and was reconstituted and rebuilt in Charleston following the Civil War.

Not only the location, but also the date of the attack in Charleston on Wednesday, was symbolic. The Atlantic interviewed Douglas Egerton, a history professor and biographer of Vesey, who said,

“The original plan for Denmark Vesey’s uprising is July 14, Bastille Day. It is moved back to midnight on June 16—they plan to free the slaves, and fight their way down to the docks—meaning the fighting will be on June 17. Historians don’t like coincidences. Either it’s a terrible coincidence, or he knows this history. The fact that June 17 would have been the day of the fighting is troubling.”

Egerton seems to realize that it’s not a coincidence even while allowing for the possibility. It seems far more likely that when the suspect Dylann Roof reportedly shot 9 people at a prayer meeting in the church, including Pastor and State Senator Clementa Pinckney, Roof knew exactly what he was doing. The significance was immediately expressed in a Twitter exchange between prominent chronicler of the black American experience, Ta Nehisi Coates, and a blogger who goes by The Historianess.

Tonight it is 1830 in #Charleston. We have come NOWHERE. We are going nowhere. #denmarkvesey

No. @historianess is telling me that shot eight people in DENMARK VESSEY’s church. Seriously, no.

Roof targeted a living symbol of the black community’s Dream, such as it can be said to exist under the social, political and economic siege of America’s relentlessly unequal history. The preponderance of circumstantial evidence strongly suggest that Roof was well aware of the place’s history, enough to choose an important date. He was also apparently aware of the history of white supremacism in the area. A survivor reported that Roof said, as he murdered, “You rape our women, and you’re taking over our country…,” a line fraught with historical overtones of slavery, and justifications used in the reign of terror of the Ku Klux Klan and lynching. In a brooding photo posted several weeks ago on his Facebook page, Roof is wearing a flag of Apartheid South Africa.

It is the hallmark of an intelligent and calculating terrorist to attack not only the body of the victim, but the victim’s symbols of power, pride, and independence, to demean the victim’s community, to sow a lasting sense of vulnerability in the victim’s group. These were precisely the calculations al Qaeda made prior to 9/11. They were the calculations of the KKK in the decades of lynchings and church burnings.

This was not an attack on faith, as Fox News idiotically said it was. Roof cannot be dismissed as a troubled kid with mental health issues. Dylann Roof was a grown man who is apparently well aware of the history of white power and the history of efforts toward black power, in his neck of the woods, in the Deep South, and in America. He is apparently a white American man who was not disgusted by this history but made the personal decision, possibly egged on by social pressures around him, to revel in it. He made the decision to join his slave-owning and black terrorizing forebears and enter American history’s long march of racial terrorists.