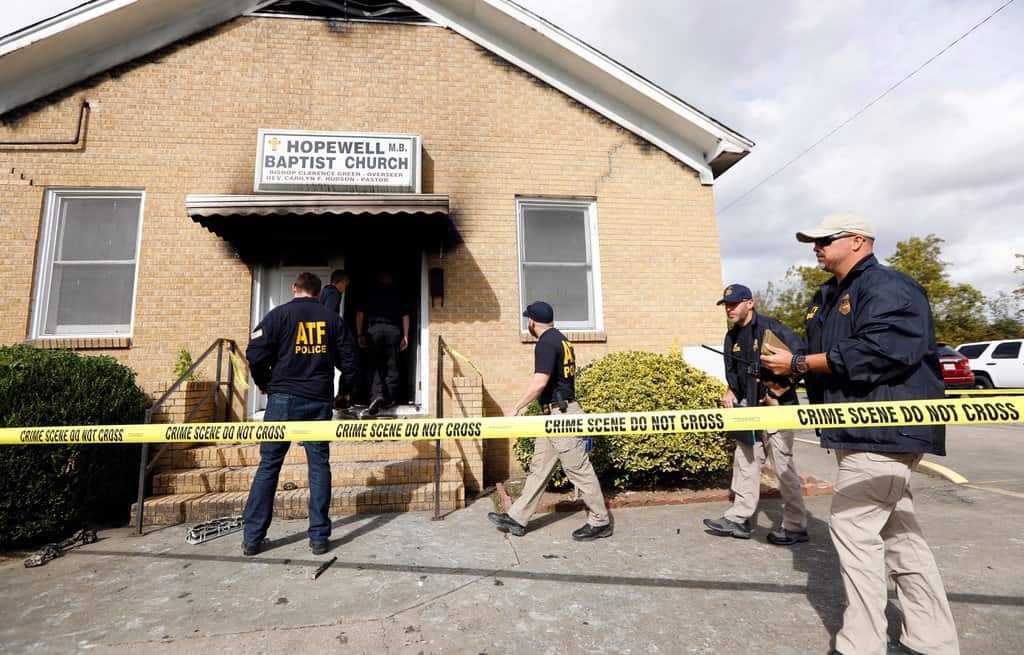 Donald Trump’s America is looking increasingly scary, intolerant and violent. His disgusting rhetoric throughout this election campaign has been matched by what some of his absolute deplorable followers both say AND do.

And in the do department, another sick, disturbing and deplorable action has taken place in the name of Trump. This time it’s in Greenville, Mississippi, where WDAM-TV reports that an African-American church has been torched.

Why look at Trump, you might asked? Well, the fact that “Vote Trump” was spray painted on the side of the burned out Hopewell Missionary Baptist Church should raise a red flag or 10.

Should anyone be surprised by something like this? Well, NO! Absolutely not. Not in the slightest. In fact, given who some of Trump’s supporters are, it should even be expected.

As VOX reports, on the same day as the church burning, Donald Trump received some high praise from a writer for The Crusader – the official newspaper of the Ku Klux Klan. Some see it as an endorsement from the white nationalist hate group, while others just interpret it as the KKK seeing Trump as an ally of their hate movement.

““Make American Great Again!” It is a slogan that has been repeatedly used by Donald Trump in his campaign for the presidency. You can see it on the shirts, buttons, posters and ball caps such as the one being worn here by Trump speaking at a recent rally . . . But can it happen? Can America really be great again? This is what we will soon found out! While Trump wants to make America great again, we have to ask ourselves, What made America great in the first place? The short answer to that is simple. America was great not because of what our forefathers did — but because of who are forefathers were, America was founded as a White Christian Republic. And as a White Christian Republic it became great.”

The Washington Post reports that the Trump campaign didn’t take long to distance themselves from the love shown to him by America’s most notorious hate group.

“Mr. Trump and the campaign denounces hate in any form. This publication is repulsive and their views do not represent the tens of millions of Americans who are uniting behind our campaign.”

They denounce hate in any form? Really? Seeing as Trump spews hate on a daily basis, this doesn’t really come across as a reassuring statement.