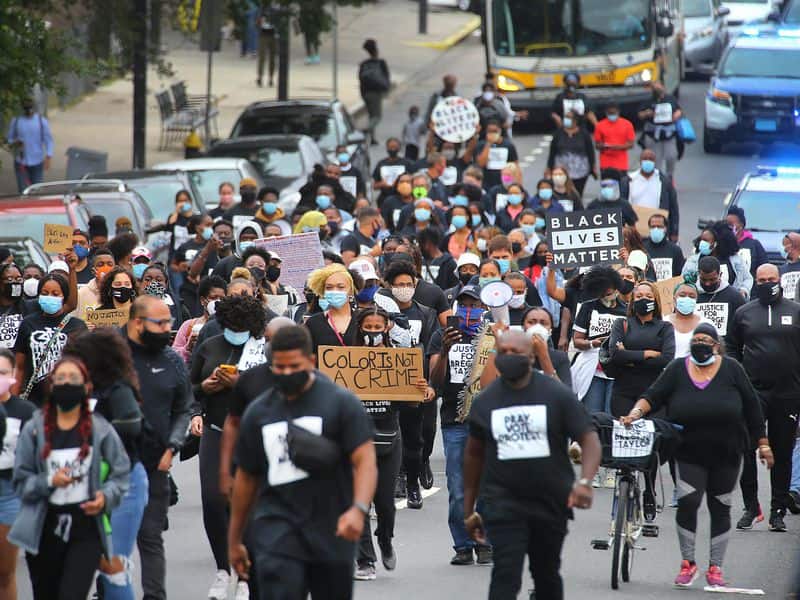 On July 12th, Paul Castaway, a Lakota Sioux tribal citizen, was shot and killed by officers with the Denver Police Department:

“Police Chief Robert White reported at the scene Sunday that one of his officers shot and killed a man after he came ‘dangerously close’ with a long knife. However, family members said they believe the shooting was not justified after the manager at Capital City Mobile Home Park on West Kentucky Avenue showed them surveillance video of the shooting. . . . Castaway, 35, was shot four times and died Sunday evening at Denver Health. Gabriel Black Elk, Castaway’s brother, said the video shows his brother holding the knife against his own throat. He had tried to escape from police by running behind a fence, but there was no gate or opening. The video shows Castaway turning around and walking toward police, who were several feet away. The knife stays pointed toward his neck the entire time, Black Elk said. Thomas Morado, a cousin of Castaway’s, also said he had seen the video. His account matched that of Black Elk’s. ‘There was a different way to go about this,’ Morado said. ‘It didn’t have to end in his death.’”

There have been no shortage of shocking acts perpetrated against Native Americans this year. Back in February, Wisconsin Governor Scott Walker smashed the dreams of the Menominee Tribe over venal considerations. Native American groups are still fighting against a deal, sponsored by Arizona Republicans John McCain and Jeff Flake, that gives 2400 acres of sacred Apache land to Resolution Copper, which intends to mine the living shit out of it. And in South Dakota, a group of drunken idiots who poured beer on Native American children will suffer little consequences for their actions.

This is something further though: more violent and less in the eye of the national media. And it is far worse than you might think. While African American men between the ages of 20 and 24 are the one demographic group most likely to be killed by the police, Native Americans constitute the racial group most at risk of police killing:

Though this statistic receives little recognition, it is hardly surprising. The history of state violence against Native Americans goes back hundreds of years. Organized resistance against this violence, such as the American Indian Movement, was met with escalation of state sponsored violence. The needless death of Paul Castaway is only the latest in a string of state violence targeting Native Americans. But this string of violence has been largely invisible to the public. The needless and shocking death of Sandra Bland has galvanized the nation. One day after her death, Native American activist Rexdale Henry died, in very similar circumstances.

Another suspicious death for an acitivst. Native American #RexdaleHenry lost his life to similar #SandraBland https://t.co/Xpsm9ZyF0f

But the death of Rexdale Henry has seen nowhere near the public outcry and national attention as the death of Sandra Bland. That needs to change.

Let me be very clear about this. The recognition of police violence perpetrated against Native Americans, as well as the #nativeamericanlivesmatter movement is not something that stands in opposition or as an alternative to the #blacklivesmatter movement. This is not a zero sum game. Bringing the epidemic of violence against Native Americans to national attention does not mean that we must turn our attention from the epidemic of violence against African Americans. #nativeamericanlivesmatter is not analogous to #alllivesmatter. #alllivesmatter distracts from the issue in a manner analogous to responding to a query about one’s feminism with the claim that one is a humanist. #nativeamericanlivesmatter and #blacklivesmatter address related, if distinct, issues. Addressing one issue will not necessarily address the other, but it can  provide valuable insights. The movements can very much compliment and act in solidarity with one another.

Ultimately, the unjustified violence against African Americans and the unjustified violence against Native Americans are symptoms of the same root cause: a systemic racism that pervades American society, and which our police act as agents of coercion and violence in service of. Fighting against that systemic racism is a task for everyone, but it will not be accomplished by the glib claim that #alllivesmatter. Because “all lives” includes those, such as myself, who directly benefit, willingly or not, from this same systemic racism. It footnotes those who are, in actuality, directly targeted by state coercion, repression, and violence. Those voices need to be directly heard, and not smothered by a broadly obvious claim about all lives mattering. And that, ultimately, is why both #blacklivesmatter and #nativeamericanlivesmatter are necessary and essential. Both must be supported and both must be publicized.

The task now, for those who are part of the #nativeamericanlivesmatter movement, is to elevate the public’s awareness of the epidemic of violence that is occurring. Paul Castaway and Rexdale Henry should be as much a part of the national discourse as Freddie Gray and Sandra Bland. Both Native Americans and African Americans are being targeted by the police. And both of those shameful facts must be addressed.