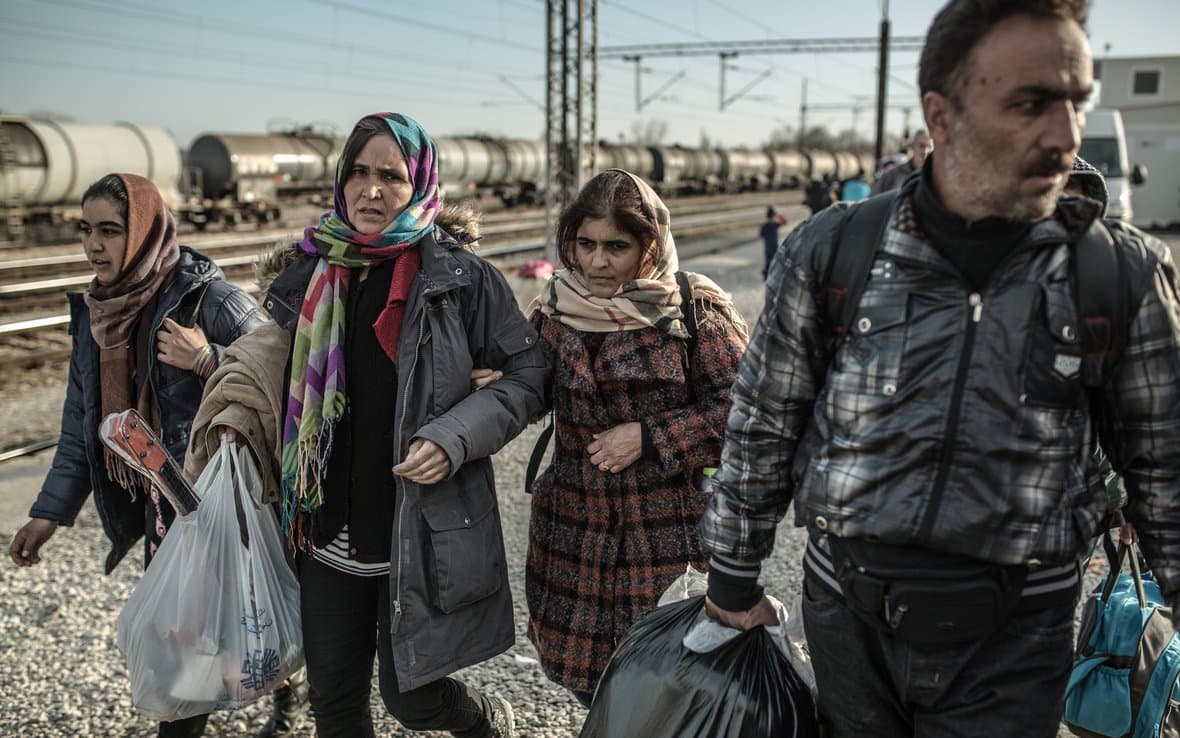 A very brief history and overview of the Syrian situation

In March 2011, a civil war in Syria erupted after President Bashar al-Assad opened fire on pro-democracy mostly peaceful demonstrators participating in Arab Spring. The Syrian people gained weapons from defectors from Assad’s military and returned fire at the next demonstration when Assad’s military gunned people down in the streets once again. After that, it was war. Those fighting Assad are who the U.S. is backing, they’re the pro-freedom, pro-democracy rebels, and the innocent people caught in the crossfire are civilians. The civilians fleeing their country are the refugees.

For those civilians who didn’t flee right away were subjected to cruel chemical weapons dropped on their neighborhoods by their government, they’re subjected to brutal interrogations that often end in death, air raids, and military operations.

After Syria had shattered, ISIS, or DAESH, which had taken key strongholds in Iraq on the Syrian border, moved in. So not only were these people being subjected to government tyranny far beyond American’s comprehension of the term, now a cruel, brutal army of violent cultists moved in to lay punishment to religious offenders and those who oppose them as they tried to advance their position. Since DAESH were fighting the rebels for Assad, he allowed their presence in his country, and now the region is one big steaming vat of clusterfuck.

Millions of people have fled the country; there are an estimated 200,000 dead. Countries all over Europe and the Middle East have begun taking in tens of thousands of refugees.

RELATED: How U.S. Foreign Policy Created ISIS And The Syrian Refugee Crisis: In 5 Minutes (VIDEO)
How many Syrian refugees are in the U.S. now?

The U.S. has already started admitting refugees who had applied years ago. Currently, 1,800 refugees are living in 35 states in the U.S.

Politifact shows that for comparison:

It’s also important to note that France, even after being attacked by what appears to be French and Belgian nationals — the Syrian refugee terrorist attacker story has not been substantiated — will go ahead and accept 30,000 Syrian refugees.

So the U.S. is way behind our allies, but we have accepted some and they are living here today.

According to administration officials over half those now admitted to the U.S. are children. The other half are 50/50 men and women and only two percent of single men are of combat age. Yesterday, I had a right wing troll in hysterics that the refugees the U.S. were admitting were nearly all men of combat age…not true, crazy lady.

How many refugees are there and how many will the U.S. accept?

On average the U.S. takes 70,000 refugees per year from all over the world, President Obama announced we would increase that number to 85,000 with 10,000 of those being Syrian.

President Obama has set the bar low. Politifact points out that politicians and pundits say the U.S. will try to accept 250,000 — this is not true. We should be accepting more as a nation, especially since smaller countries are accepting 3-4 times our numbers, but given the current climate, 10,000 will have to do for now.

The UN reports that they have currently received 4.3 million applications for refugee status since the fighting began in Syria. The Republicans expect us to believe that out of that vast number of people, we can’t possibly thoroughly vet 10,000 refugees?

How are the refugees processed, and will they be let in without background checks and papers?

This is probably the most important issue for which we need to we need to gain clarity. The refugee application process is very thorough and takes 1-2 years, sometimes longer, to process an application. If a refugee’s background cannot be substantiated, they will be rejected for immigration.

The refugees admissions program, created in 1980 and retooled after 9/11, does actually perform background checks on all refugees, to the extent possible.

Because people were uprooted quickly and their homes destroyed, and since the U.S. is backing the rebels fighting the government, we don’t have access to their government’s intelligence and records. However, the refugees did have lives before the war and can be verified through their addresses, IDs, family members, former neighbors, phone numbers (on record with phone companies), places of employment, school records and any and all traveler information they may have on them.

Families are separated and interrogated through a series of interviews; all stories must match or the application is denied. If a family member, friend or close relative of the refugee has links to terrorism, the refugee will most likely be denied. If a person is thought to be religious extremist, they will be denied. Once the UN can prove who they are and that their intentions are pure, there is still a waiting period and more security clearances to clear in the accepting country.

For the GOP to say we don’t know who these people are, is ludicrous. The U.S. knows full well who the refugees are before they even set foot in our country.

Once the cases are passed along to the United States, the refugees undergo security clearances. Their names, biographical information and fingerprints are run through federal terrorism and criminal databases. Meanwhile, the refugees are interviewed by Department of Homeland Security officials. If approved, they then undergo a medical screening, a match with sponsor agencies, “cultural orientation” classes and one final security clearance.

RELATED: This Bosnian Refugee Explains The Difficult Vetting Process To Get To The U.S.

The Syrians have to complete an additional hurdle of having their information cross-referenced with classified and unclassified government documents. If they can clear all these hurdles, jump through all the hoops, their application can still be denied based on the number of refugees we’re willing to accept.

Would it make any sense for DAESH to try to enter our country this way? Would it be possible to fabricate an entirely different existence with family members and acquaintances all verifying the same fabricated story in separate rooms AND have a background match while flying under the radar with intelligence agencies? It seems entirely impossible.

Refugees are subject to the highest level of security checks of any traveler category to the United States. So for ISIS to take advantage of the refugee program “makes no operational sense.”

“Given how easy it is to send a European extremist to the U.S. via Europe, why would an ISIS guy in Syria wait the three years it takes to get refugee status?”

As for the claim that the Syrian refugees don’t have papers, that is an utter fabrication as well. The GOP would have us believe these people lived in dirt houses and paid for things in leaves. These people prepared the best they could to leave, and if their information was destroyed because of a bomb dropping on their house, this could be verified.

“As for concerns about potential refugees lacking documents to prove who they are, the administration officials said Syrians as a population tend to provide extensive documents involving their day-to-day lives. They often arrive with family histories, military records and other information that can be useful for American authorities investigating them.”

So, don’t believe the hype and inform others that when Ted Cruz or any of the other GOP Presidential candidates says “we don’t even know who these people are” they are being purposefully deceitful to continue to spread fear of Muslims. And most importantly, the people trying to come here are pro-democracy, pro-freedom people, they do not want Sharia law, they aren’t any more extremist in religion than our Christians here. These are families, widows, the elderly, and people displaced against their will. When we fear these people because of the off-chance DAESH will come here too then you have given them the power to terrorize you, and that’s a job well done for terrorists.