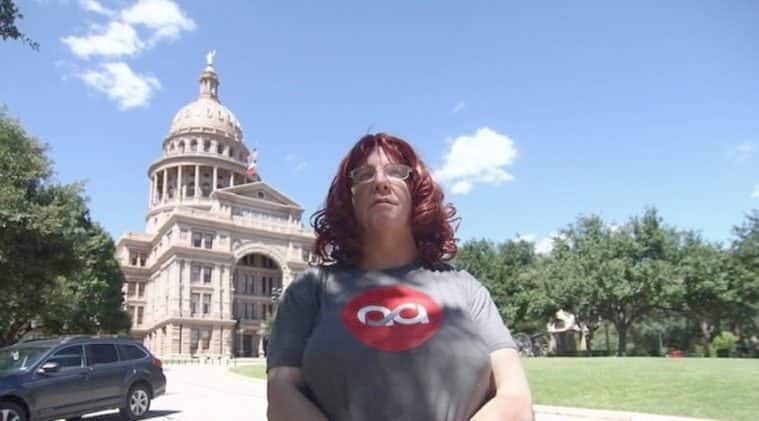 Despite there being no evidence to support the notion that transgender people in public restrooms are somehow a threat to (cis) women and girls, conservative groups and lawmakers pushing anti-LGBT ‘bathroom bills’  continue to frame them as a protection.

While there’s no evidence that trans people are attacking women and girls in bathrooms, there is evidence that using a public restroom may be dangerous for trans people. One police officer in Texas made this alarmingly clear when he threatened to severely beat trans women using the same facilities as his daughter.

Tracy Murphree is a police officer, currently running for sheriff in Denton County, Texas. In a Facebook post, now hidden from public view, but published by the Dallas Observer, he threatened to beat trans women so severely that they would need to be hospitalized:

“All I can say is this: If my little girl is in a public women’s restroom and a man, regardless of how he may identify, goes into the bathroom, he will then identify as a John Doe until he wakes up in whatever hospital he may be taken to. Your identity does not trump my little girl’s safety. I identify as an overprotective father that loves his kids and would do anything to protect them”

The post sadly did receive messages of support, but Amber Dyden Briggle, the mother of a trans boy, also reacted by expressing her genuine fears for the safety of her own eight year old child when he has to use the restroom:

“I know you are a protective parent, but SO AM I. If my son were to walk into a women’s room, looking the way he does, he would no doubt be corrected and sent to the men’s room. What we’ve done now is call attention to a young child, only 8 years old, who is now behind closed doors with a bunch of men — had he walked in there to use the bathroom to pee in the first place, no one would have batted an eye, because he looks like and IS a boy. ”

Briggle’s post calls attention to the challenges faced by trans people, but also the flat-out absurdity of laws that want to keep men out of women’s bathrooms that are actually forcing them to do exactly that. Of course, none of this dissuaded Murphree who insisted that he was not bigoted, but simply concerned about the safety of his child:

In Murphree’s mind, there is somehow an equivalency between Briggle, who wants to protect her child’s right to go to the washroom without fearing harassment or assault, and his “right” to hospitalize a trans woman for using a public restroom and for doing absolutely nothing in any way impact his child.

‘Bathroom Bills’ Protect No One, Put More People In Danger

As these offensive ‘bathroom bills’ have cropped up from South Dakota to North Carolina some, like retailer Target, have pushed back with policies welcoming employees and customers to use the facilities that “corresponds with their gender identity.” Sadly, others have doubled down on their prejudiced views, like Murphree and the Liberty Counsel Lawyer Anita Staver who took to Twitter to threaten to carry a Glock. 45 handgun into the Target restroom to defend herself. She later re-tweeted a post encouraging her followers to go to Wal-Mart, as Target asks customers not to bring guns into the store:

I’m taking a Glock .45 to the ladies room. It identifies as my bodyguard. #BoycottTarget @Target

That would be good for all the other @NRA members out there to know.

All these disturbing threats continue to highlight that while trans people are not a danger to others in public restrooms, using a public restroom can be an extremely dangerous to trans people. A recent study from the Williams Institute think-tank indicated that the majority of transgender people had experienced a negative reaction when trying to use a public restroom, including verbal harassment or even physical violence.  As Briggle pointed out in her response to Murphree, there is absolutely no reason why a trans person using a public restroom should impact your life in any way:

Transgender people are NOT a danger. I can promise you that you have used the bathroom COUNTLESS times with a transgender person without even knowing it.

Why? Because normal people, transgender or otherwise, go into a public restroom, use it for its intended purpose and leave. At no point do they feel the urge to investigate anyone else’s anatomy or birth certificate. Maybe Republican politicians are concerned given their own habit of getting in trouble in public restrooms.

The world is still a dangerous place for women and girls, both cis and trans, and there are many ways that lawmakers and law enforcement could offer better protection, but these laws aren’t one of them. The ‘bathroom bills’ only make these spaces more dangerous by lending credence to the violently bigoted views of people like Murphree.