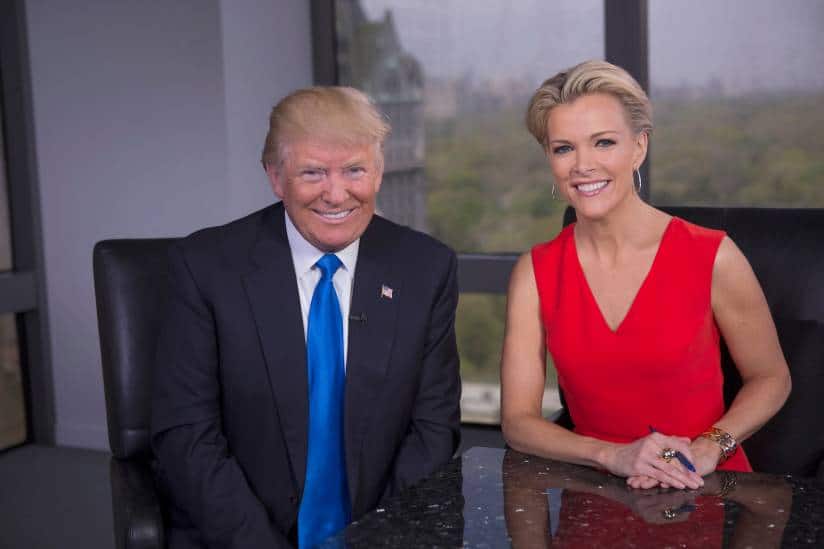 As journalists go, I don’t have much use for Megyn Kelly. “Journalist,” in fact, is a bit of a charitable term, given that she works at Fox News, where she has used her platform to spew the typical blather that we have come to expect from the network. From enabling homophobia to enabling Islamophobia to fear-mongering over racial relations Kelly is, for the most part, a quintessential creature of Fox News. She even hews to the absurd party line in claiming that Fox News is “fair and balanced.” But every now and again, Kelly remembers that she is, in theory, a journalist, and does something right. Her calling outDonald Trump’s endless misogyny, at the Republican debates, was one of those moments.

“Mr. Trump, one of the things people love about you is you speak your mind and you don’t use a politician’s filter. However, that is not without its downsides, in particular, when it comes to women. You’ve called women you don’t like ‘fat pigs, dogs, slobs, and disgusting animals.’ Your Twitter account has several disparaging comments about women’s looks. You once told a contestant on Celebrity Apprentice it would be a pretty picture to see her on her knees. Does that sound to you like the temperament of a man we should elect as president, and how will you answer the charge from Hillary Clinton, who was likely to be the Democratic nominee, that you are part of the war on women?”

And the reaction to this was predictable. Trump’s supporters, to put it mildly, went a bit apeshit. And Trump gleefully retweeted some of his supporters’ choicest insults

“@FrankLuntz: I’m getting a lot of @MegynKelly hatemail tonight. #GOPDebate” She is totally overrated and angry. She really bombed tonite

And then things started to get ugly. Ted Nugent chimed in with his unique brand of dumb. Kelly may or may not have gotten a death threat or seven. A petition was kicked off to have her removed from hosting any future debates.  And Roger Ailes, chairman of Fox news, found himself having to choose between defending Megyn Kelly and chasing the ratings. Three guesses as to which one he chose, and the first two don’t count:

“In the fallout since the first GOP debate, Fox News chairman Roger Ailes has found himself caught between Donald Trump, who has the full backing of Fox’s misogynist audience, and Megyn Kelly, the star anchor whom Ailes has nurtured and sees as the key to reaching younger viewers. For a few days, Ailes didn’t know how to handle Trump’s full-throated attack on Kelly, who accused Trump of sexism during the debate. Eventually . . . he made the same choice he always does: follow the ratings, and mend fences with Trump. But that process has meant that Fox has had to mute its defense of Kelly, who is now watching uneasily as the Fox audience turns on her: According to one high-level source, Kelly has told Fox producers that she’s been getting death threats from Trump supporters.”

And now we get the news that Megyn Kelly is taking a two week hiatus. It is tempting to laugh, wallow in schadenfreude, and say that Megyn Kelly got exactly what she deserves. The travails of a Fox News shill are of little concern to us, right? Wrong. This is a rare case in which Kelly did something right. And the perverse joy with which Trump has encouraged his supporters basically proves Kelly’s original point: the man is a misogynist. Not that Trump’s misogyny is anything unique to the Republican field, but he certainly emits his hatred at a higher volume. We shouldn’t be celebrating Trump’s momentary victory over Kelly; we should be, dare I say, deploring it.

Because sadly, this sort of behavior on the Internet is nothing new. We like to find things to be outraged about, and then spend a few days cheerfully overreacting. It is a positively addictive phenomenon. Someone engages in questionable behavior? Well here’s their phone number. And their employer’s phone number. And their home address. Let’s get ’em. The notion of public shaming has been around for a very long time but, thanks to the power of the Internet, public shaming has become a monster. It is all very well and good to have a few score people in your village call you out for being an asshole. It is a very different thing when the entire Internet goes into a feeding frenzy with you as the target. This is no excuse for the actions that may have provoked the feeding frenzy, but just maybe we shouldn’t go from zero to death threats in 10 seconds.

And there’s another nasty wrinkle here. These sorts of feeding frenzies far too often target women. Take a look at the whole Gamergate fiasco of last year. You’ll need a shower afterwards. What is notable, in those cases where women are targeted, is that very often it is not because they have done anything wrong, per se, but because they have said something that a subset of folks disagree with. Such is the case with Megyn Kelly. She actually stepped up, did her job, and called out Donald Trump. And now his rabid supporters are shrieking at her.

Again, this is nothing to celebrate. Disagree with Megyn Kelly all you want, (and believe me, I do), this sort of misogynistic treatment is unacceptable. No one deserves this. Not even a Republican. Not even a Fox News anchor.