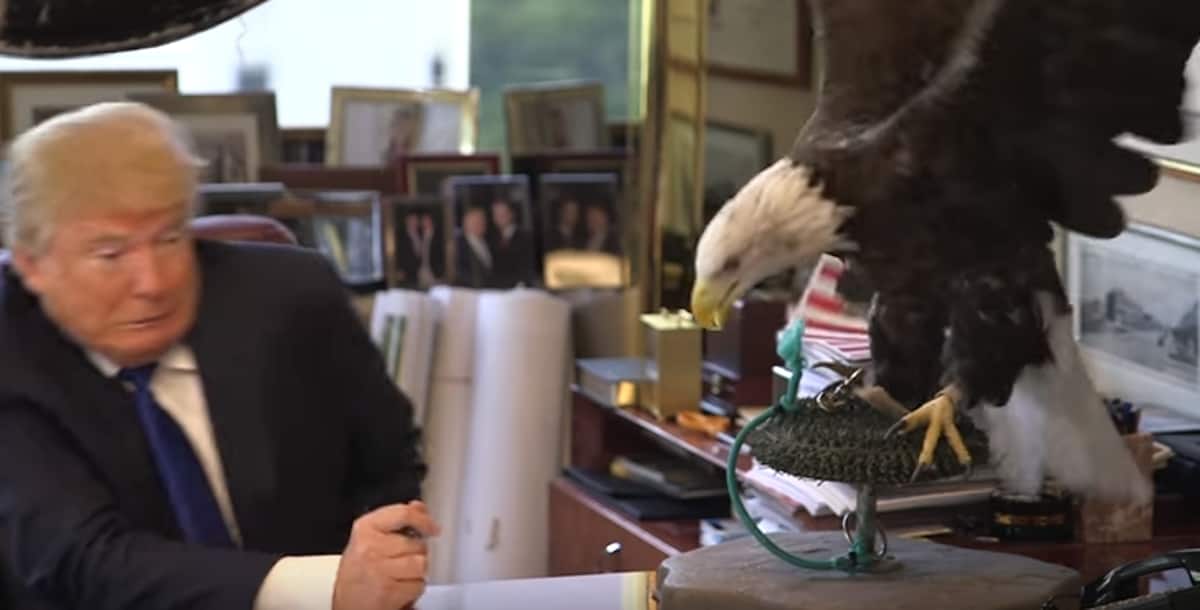 Republican presidential front-runner Donald Trump posed for a photo shoot with Time Magazine in August. Time photographed Trump for a cover story about Trump’s unlikely presidential bid. In the story’s featured image, Trump holds a bald eagle while standing, and trying to look normal, in his Trump Tower office.

On Wednesday, Time released extra footage of the photo as part of its roundup of Time’s Person of the Year winner and runners up. During the photo shoot, the bald eagle, who is affectionately named Uncle Sam by its handlers, attacks Trump at least twice. The video has only been online for hours but was exploding in popularity. It may seem satisfying to the majority of Americans who find Trump’s bigotry offensive. As Trump attacks the most fundamental principles of inclusion, asylum and freedom of religion that make America a free country, Uncle Sam attacking Trump was a fitting symbol.

Uncle Sam is clearly very perceptive and knew to attack Trump’s vanity, right in his Achilles’ hair. The bald eagle bit the bald billionaire’s preposterous comb-over, a hairstyle becoming as iconic a symbol of his totalitarian political ideology as Adolf Hitler’s mustache. Trump, looking extremely uncomfortable, asked the photographers how his hair looked. The eagle also nipped at The Donald’s hand. Trump concluded the interview by saying, “This bird is seriously dangerous but beautiful.”

Time named Trump as a runner-up for Person of the Year. Time announced the winner for this year is Angela Merkel, Chancellor of Germany, for her leadership in Europe during multiple crises. Time readers voted for Democratic presidential candidate Bernie Sanders for Person of the Year. In the readers’ poll, Sanders garnered 10% of the vote, nearly twice as much as Malala Yousafzai, who came in second.

Donald Trump: Bill Gates Should “Close Up The Internet”