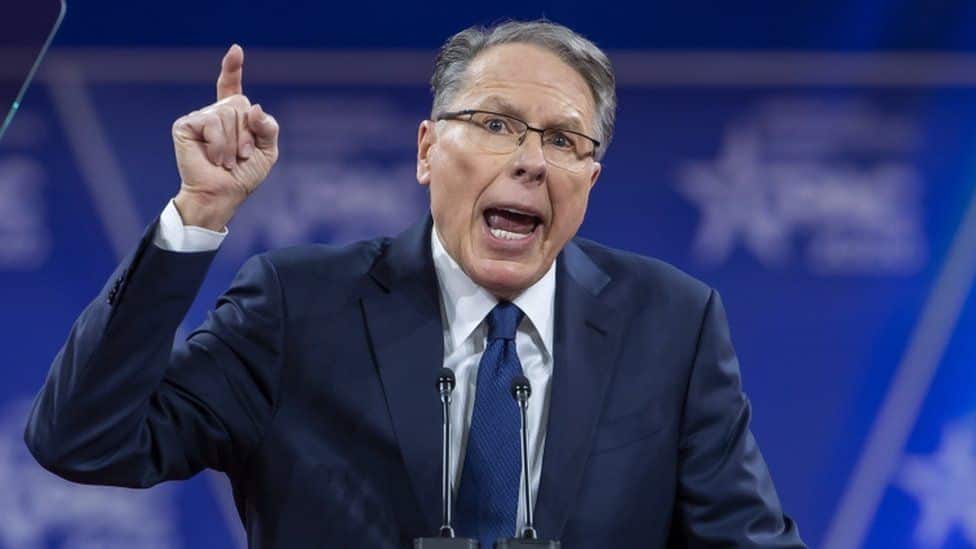 During a speech to the National Rifle Association’s annual convention on Saturday, Wayne LaPierre combined sexism and racism in a single statement to express his desire to see a white man back in the White House.

In his remarks, LaPierre warned all of his fellow gun nuts that President Obama still has 650 days left in his presidency and that its enough time for him to derail the Second Amendment and institute tyranny across the land.

“The next 650 days are the most dangerous days in history for the Second Amendment and for our personal freedom. That’s how long President Obama has left. Between now and the day he leaves office, he has 650 days to do whatever he wants to whomever he wants. He disregards the Constitution. He ignores his oath of office. He snubs Congress. And he dismisses the majority will of the American people.

For nearly seven years now, the president has forced his transformation down America’s throat, and our nation is choking on it. As he prepares to leave office, and leave his final legacy, there’s no telling how far President Obama will go to dismantle our freedoms and reshape America into an America that you and I will not even recognize.”

LaPierre then claimed that Hillary Clinton will be crowned as the next president, which drew hateful boos from the crowd.

“And when he is finished, he intends to go out with a coronation of Hillary Rodham Clinton. [boos]”

And then LaPierre made a statement that smacked of the sexism and racism that has become a major part of the Republican Party over the years, suggesting that conservatives want a gun-toting white male right-winger to win the presidency in 2016. Because apparently only old conservative white guys are capable of leading.

“I have to tell you, eight years of one demographically symbolic president is enough.”

LaPierre than vowed that the NRA will fight harder than ever before to sabotage the Obama Adminstration and guarantee a president who represents the white male gun owners in the room.

“Eight years of the Obama/Clinton regime has sent our nation into a tailspin of moral decay, deceit, and destruction. And the NRA will fight like never before- I promise you- for the next 650 days to protect our freedom and elect a president who shares our values and respects our rights as free people.”

Here’s the video via Media Matters.

Once again, Mr. NRA himself has made it perfectly clear that the Republican Party does not welcome diversity when it comes to political power. To conservatives, only white men should hold the highest office in the nation and they will reject anyone who does not fit that mold. It sounds like conservatives and the NRA are just begging for women and minorities to vote against the Republican Party in the next presidential election in 2016. And when right-wingers don’t get the white man they want in office, we all get the pleasure of watching them whine and cry for the next four years as they continue to watch as their base shrinks ever smaller, only to become nothing more than a footnote in American history as the most diverse and tolerant generation rises to move this country forward away from the hate that has held us back for decades.