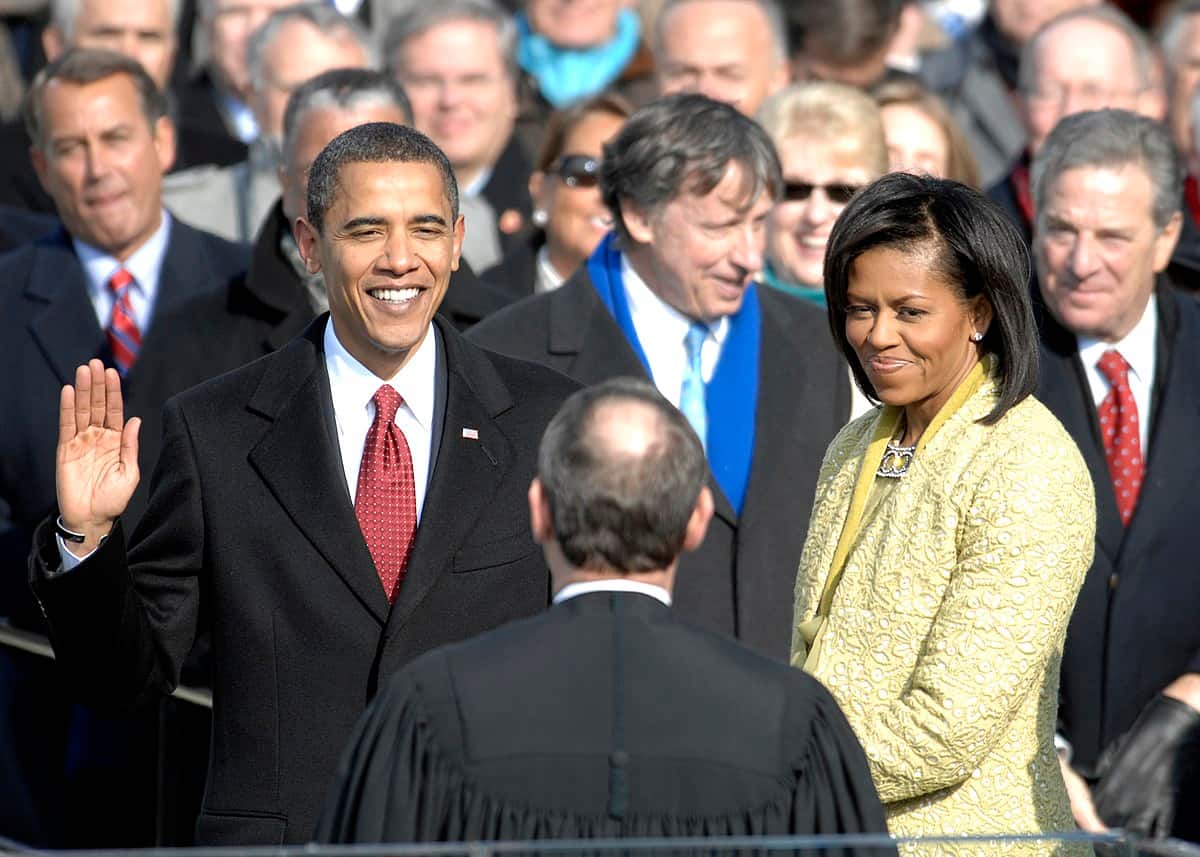 President Obama’s job approval has hit a three-year high according to a new Gallup poll, fueled primarily by an increase in support from Democrats and Independents.  The President enjoys the support of 87% of Democrats as well as 45% of Independents, resulting in a 50% overall job approval rating. Obama even picked up a percentage point from the Fox News bubble in the first nine weeks of 2016, with his support among Republicans ballooning from 10% to 11%. As the First Family finds themselves in the final months of their historic tenure at 1600 Pennsylvania Avenue, here’s a look at the reasons why more and more Americans are approving of the way he’s handled the nation’s business.

Not everybody agrees with the everything the President does. Sure, the right-wing echo-chamber will criticize him on everything from his birth certificate to marrying a woman with the gall to suggest kids eat healthy, but like most presidents, Obama’s policies and practices have their detractors on both sides of the aisle. But the man’s existence has not — and does not — make Americans ashamed the way some of his more recent predecessors have.

He may not always do what we think or what we wish he would do. He may do things we completely oppose. But he does them with class, dignity and respect.

Historical Perspective Is Coming Into Focus

It’s not easy to view contemporary events through the lens of history, and that’s even truer for a presidential administration than most other examples. We’re a more polarized nation than ever before, as the Gallup poll points out, so you have to accept that a sizeable chunk of the population is going to back whatever you do, another block is going criticize everything, and even more people won’t even care. As events take place, legislation is passed, and actions are taken, it’s difficult to project what the results or unintended consequences will be. But as we sail into the final months of the Obama Administration, we’re gaining some clarity on its narrative.

This administration shepherded the US through murky economic waters and prevented a complete economic meltdown. It oversaw the withdrawal of occupying forces in Iraq. The President gave the order to kill Osama Bin Laden. He passed the most comprehensive health care reform package in American history. These accomplishments will be lauded in the history books for a century.

But every Presidency has accomplishments. Obama’s true legacy will last longer: He helped make America look like America.

While we obviously can’t overlook the historic nature of his election (and overwhelming re-election), his accomplishments in this feat go far beyond simply becoming the first person of color to occupy the Oval Office. The President has appointed two females to the Supreme Court (with an outside chance of appointing a third). One of them was the first American of Hispanic descent to serve on the court. Same-sex marriage is now legal in all fifty states. Obama has assembled the most diverse administration in the history of the Presidency.

When the Trumpkins argue that they want to “Make America Great Again” — let’s not kid ourselves — this is exactly what they’re rallying against. They don’t like people who don’t look like them being the face of this land. But the truth is that white males make up a little less than 1/3 of the entire country. Heterosexual white males even less. The President has made a concerted effort to present America to the world as she really is, and that’s toothpaste that will never be put back in the tube.

Obama Has Mastered The Long Game

George W. Bush couldn’t wait to bribe the electorate with a one-time $300 rebate check for everybody when his disastrous tax cut was passed early in his first year. President Obama has taken a longer, more cautious, yet fruitful approach to governance: He looks at the big picture. While another rebate check would have undoubtedly scored major political points when he took office in the midst of a financial crisis, his insistence that tax relief was to be provided in the form of payroll tax credits ensured that the money refunded to the taxpayer would meet its primary goal — it would be immediately be pumped back into the economy. You might send a $500 check to Visa to pay down some debt, but an extra $35 in your bank account each month would likely be spent on clothing, food, or other retail purposes which would keep businesses open and people employed.

This long-term approach is one of the reasons former Reagan aide Kenneth Adelman made a stunning (for a Republican) admission to Politico last summer:

“It may turn out that unlike virtually any other president, his second term is actually better than his first.”

Whether you want to look at all aspects of the stimulus package, the Affordable Care Act or the decision to decline a defense of DOMA before the Supreme Court, you will see a President willing to sacrifice cheap political points in favor of a more palatable result for the country’s future. Seven years and some change into the administration, we can see the fruits of that labor.

While the Republican clown car has sucked most of the oxygen out of the race to be Barack Obama’s successor, the Democratic candidates have engaged in a spirited debate themselves. Whether it’s apparent to the public or not, the race between Hillary Clinton and Bernie Sanders is a race to either protect or expand upon the President’s legacy. Neither campaign is running from their possible predecessor — and this is a dynamic the country hasn’t seen since 1988, when George H.W. Bush openly trumpeted the achievements of Ronald Reagan. John McCain wanted absolutely nothing to do with George W. Bush in 2008. Al Gore famously — and likely to his own detriment — attempted to keep Bill Clinton in a “lockbox” during his failed-ish 2000 campaign.

Yet as Joy-Ann Reid points out in The New York Times, Clinton promises to defend Obama’s achievements against the GOP attacks we know will continue in the next Congress and beyond, while Sanders is claiming the “Hope and Change” mantra that propelled then-Senator Obama into the White House almost 16 years ago, promising to deliver even more hope and greater change.

Debates over policies and narrative can often be esoteric, so if you’re a practical numbers person, factcheck.org can tell you all you need to know:

You know, if facts are your thing.

No President since Lincoln has had to deal with a more inept, disrespectful Congress than the one President Obama has put up with for the last six years. The writing was on the wall the minute Mitch McConnell became the Senate Majority leader in 2010 and said the top political priority in the Senate would be preventing a second Obama term (FAIL). But this shirking of legislative duty hit an all time low when key members of Congress declared that there would be no hearings or votes on a replacement for Supreme Court Justice Antonin Scalia before the deceased’s body was even cold. And the public did not approve.

According to Polling Report:

We’re not talking about the Executive Assistant to the Undersecretary of Transportation. The vacancy in question is a seat on the Supreme Court of the United States. The people vehemently disagree with the Republican Senators hellbent on depriving the President of his Constitutional right, and those Senators appear to be playing directly into the President’s hand. It’s just a shame the public took this long to awaken to this GOP petulance.

But if you want a definitive example of how the Republican Party is helping boost President Obama’s approval numbers, look no further than…

The more people realize there’s a track for this fascist clown to become their next President, the better their current President looks. You can say whatever you want about President Obama (and good luck finding something the right wing hasn’t said), but you can never say he’s made a mockery of not just the Presidency, but our entire political system.

Now, there’s been an effort by Marco Rubio and Ted Cruz to blame the escalating rhetoric and violence associated with the Trump campaign events on the President himself, calling the President “divisive” and “a world-class demagogue”. This is nothing more than two desperate candidates trying to have their Hate and eat it too. It’s a unique, albeit completely misguided attempt to launch an attack on the frontrunner while tossing some red meat to their Obama-hatin’ base. Fortunately, as the polls suggest, the roughly 300,000,000 who have no plans to vote in a Republican primary aren’t buying what Lying Ted and Little Marco are selling.

Pick the word you would normally use to describe Donald Trump? Would it apply to President Obama? Fascist? Nope. Racist? Hardly. Demagogue? Dude, buy yourself a dictionary. The President is none of these things and he’s handled himself with tremendous poise in both times of crisis and a never-ending onslaught of personal attacks.

As the final chapter of the 44th President is about to wrap up, there may not be a bigger boon to his rising approval numbers than that combed-over spray-tanned hate receptacle.

Anti-Trump Signage Found At Taco Cabana: ‘You Can’t Have Your Taco And Eat It Too.’