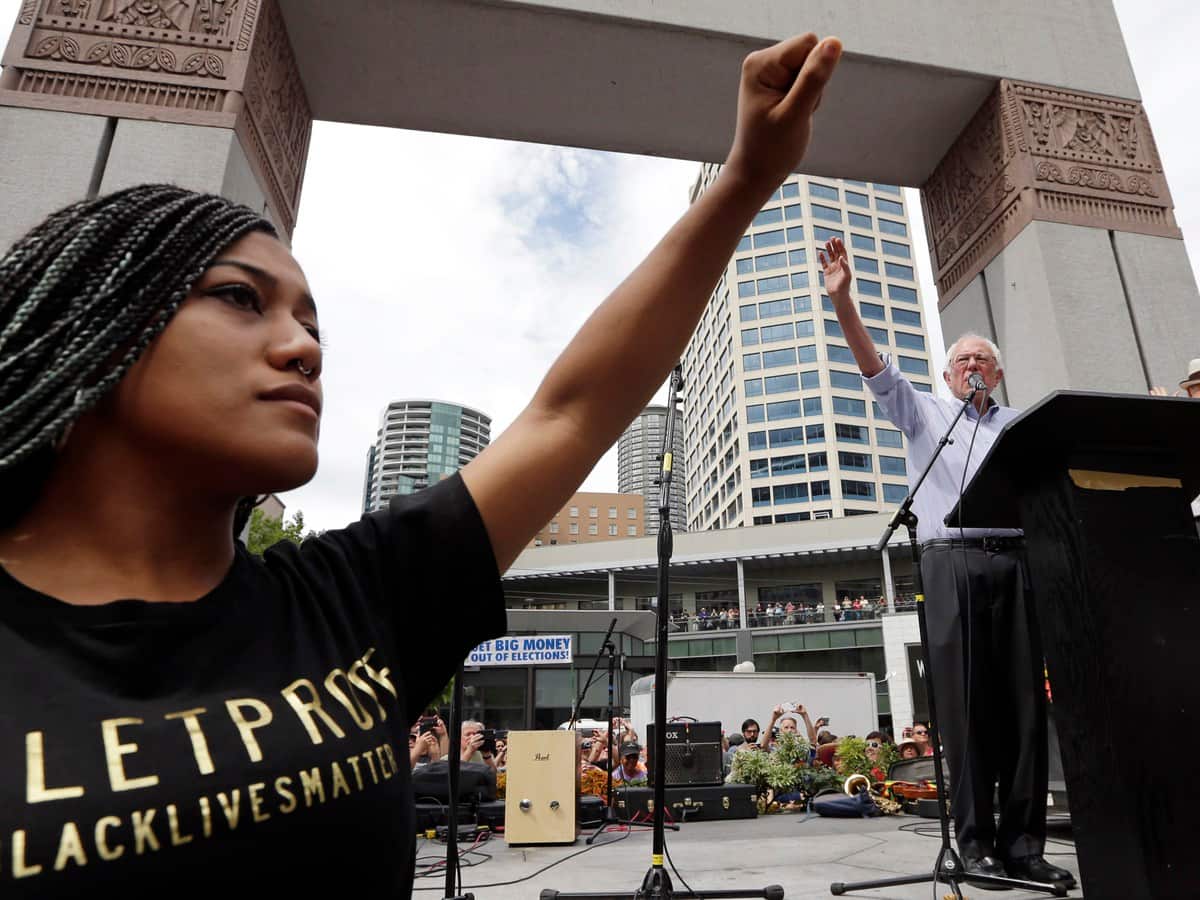 On Saturday at Westlake Park in Seattle, Black Lives Matter activists took to the stage and effectively shut down a rally where Senator Bernie Sanders was supposed to speak, KIRO 7 reports.

“Thank you Seattle for being one of the most progressive cities in the United States of America,” were the only words that Sanders could say to the crowd at the Social Security Works event, before protesters, one of whom is identified as Marissa Johnson, asked Sanders and event organizers for an opportunity to address the crowd, threatening to shut it down if they weren’t able to speak. There were several moments of back-and-forth between the protesters and event organizers, but eventually the protesters were handed the mic, as Bernie Sanders stepped aside and some in the crowd booed.

Marissa Johnson spoke about police violence in Seattle, as well as Sanders’ policy proposals related to racism and police brutality. From The Hill:

One protester, who identified herself as Marissa Johnson, began by saying, “I was going to tell Bernie how racist this city is — with all of its progressives — but you’ve already done that for me. Thank you.”
Johnson spoke, among other things, about police violence in Seattle, mentioning a federal investigation into the city’s law enforcement that resulted in the appointment of a monitor to make sure Seattle police were complying with the terms set forth by the Justice Department.
“Bernie says that he’s all about the people and about grassroots. The biggest grassroots movement in this country right now is Black Lives Matter,” she added…
“If you care about Black Lives Matter, as you say you do, you will hold Bernie Sanders specifically accountable for his actions,” Johnson continued.
“Bernie, you were confronted at NetRoots at by black women,” Johnson said before adding, “you have yet to put out a criminal justice reform package like O’Malley did.”

Some attendees called for the protesters to be arrested, while others shouted “let her talk.” Bernie Sanders eventually left the stage.

Last monthat Netroots Nation, Black Lives Matter protesters interrupted both Senator Sanders and Maryland Governor Martin O’Malley to bring attention to black women who died in police custody, such as Sandra Bland. Since then, police brutality against people of color has become a more important issue for candidates. Democracy for America has changed it’s criteria for endorsement of Democratic candidates. Candidates who want an endorsement from DFA must include addressing racism in their platforms.

“I am disappointed that two people disrupted a rally attended by thousands at which I was invited to speak about fighting to protect Social Security and Medicare. I was especially disappointed because on criminal justice reform and the need to fight racism there is no other candidate for president who will fight harder than me.”

On Saturday, there were at least two Facebook pages called Black Lives Matter Seattle. One of the pages posted a now deleted apology for Saturday’s disruption.

This got deleted alongside many tweets from account which is making me think BLM Seattle has some infighting tonight pic.twitter.com/LguudcYlQr

The owner of this page,Nikki Stephens, originally said she would delete the page, then she decided to keep the page up and change the name to Black in Seattle. She says that she is a 16 year old who supports the cause, but is not associated with the organization Black Lives Matter Seattle.

Meanwhile, the other Facebook page associated with Black Lives Matter Seattle, which was created on Saturday, posted a press release about Saturday’s events:

The reaction on Twitter is mixed. Some believe that the protesters needed to be heard, and that the never-ending killings of black people by police officers necessitate bold, direct action. Others believe that Sanders should not be the target of such demonstrations because of his civil rights record, and that today’s actions did not help the image of the Black Lives Matter movement. But how important are image and respectability when people of color are afraid that every traffic stop could be their last, and when politicians have done very little to reform our racist criminal justice system?

Really disappointed with #BLM for interrupting Sanders in Seattle. He’s on YOUR side, has been for 50 years!!

I support #BLM but I do *NOT* support their tactics at NetRoots or Seattle today. It’s COUNTERPRODUCTIVE and it’s … pic.twitter.com/91OYm3TMxf — sevenbowie (@sevenbowie) August 9, 2015

A lot of ppl uncomfortable with “tactics.” That’s been said about every civil rights movement in the history of the planet.

Not that I’m complaining about shutting down Sanders’ events, #BLM needs to do the same or even more at Hillary events. — Aʙᴅɪʀᴀxᴍᴀɴ (@AbdiNoir) August 8, 2015

This was filmed during the moment of silence.

I’m all for Bernie Sanders but Seattle, your #whiteprivilege is showing. #BLM #FB pic.twitter.com/UOquSGyvLO

Why go for Bernie? To expose an inherent contradiction, that even the most “progressive” of the bunch can’t even acknowledge white supremacy

Seeing a lot of people using the BLM + Bernie Sanders interaction as an excuse to “lose respect” for the entire BLM movement. I see you.