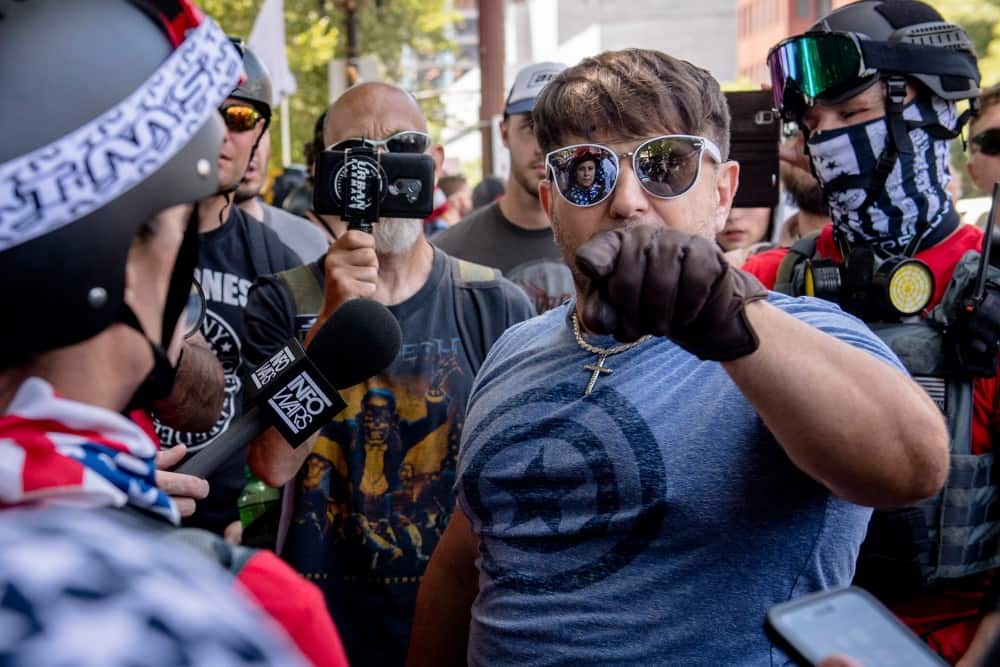 What could be more hilarious than Bundy’s terrorists and the two Bundy brothers getting a big dose of their own medicine?

On Saturday, a heavily armed group called the Pacific Patriot Network showed up at the Malheur Wildlife Refuge in Oregon to provide “security.” Ammon Bundy and his fellow kooks freaked out. It’s not clear what the group wants, but it is clear that they were carrying long guns and assault weapons. They stationed themselves at the entrance to the refuge with guns in hand and masks covering their faces.

The Bundys sound like they’re quaking in their boots, according to the messages they are sending out through Utah lawyer Todd Macfarlane, who is at the compound. Macfarlane said:

“Ammon felt blindsided. This was not a welcome development. We are trying to de-escalate here – then boom, they all show up.”

How does it feel to have the shoe on the other foot? How does Ammon think the residents of the area, the county sheriff’s department, the Paiute tribe, the state of Oregon, and the nation feel? Did anyone give notice that Bundy’s terrorists were going to show up with weapons to take over the refuge?

Another Utah participant in the insurrection, Jon Pratt, said:

“These guys are a third party. They do not represent the Bundys … and if they’re coming to keep the peace, I would’ve left the guns behind.”

That statement is almost too surreal to be funny. The Pacific Patriots aren’t a third party. They’re at least a fourth party. The third party, attempting to interfere with the prison sentence that is between local ranchers Dwight Hammond Jr., his son, Steven — both of whom showed up to do their time — and the government. The Hammonds have said, very specifically, that the Bundys and their crew — who also came to the refuge with their guns — do not represent them.

Would Anyone Be Surprised If Bundy’s Terrorists Were Out Of Control?

There is evidence that events within the compound are spiraling out of control. At an 11 a.m. press conference, the newcomers were the first to take the mike. Brandon Curtiss, founder of the Pacific Patriot Network, said his group had established a “security perimeter” to keep the different factions away from each other, but it soon became evident that he was there because of altercations within the ranks of the traitorous ranchers.

A man wearing a media tag interrupted Curtiss and stepped to the microphone to say that he had called the Patriots group to the compound because he didn’t feel safe. He was later identified by the Guardian as rightwing radio host Pete Santilli, who is attending the action and was also at the Bundy ranch face-off. Santelli complained that he and others in the compound called the Harney County Sheriff’s Office when there was a physical altercation within the compound and the sheriff’s office wouldn’t respond!

Oh, boo-hoo! Men who defy the government at every level — including the sheriff’s office that has asked them to leave the refuge — want to cry for protection when they can’t control members within their own ranks. You know what? Grow up, put away your penis substitutes, and go home. Everyone else felt safe until you showed up.

Can’t deal with more armed men responding to your call? Who cares? Don’t call 911 and expect government officials to referee your adolescent disputes.

Another Patriots spokesperson, Joseph Rice, took the mic to say:

“Formally, the Pacific Patriot Network does not support or endorse this occupation.”

Confused yet? You’re not alone. By afternoon, the Patriots were loading up their trucks and heading out to give “12 Articles of Resolution” to government entities. No one seems to know what the 12 articles say, where the Patriots are going, or if they’ll be back with their assault weapons. About the best news to come out of Saturday’s situation is that Bundy’s group may be on the path to a self-induced meltdown. The sooner, the better.