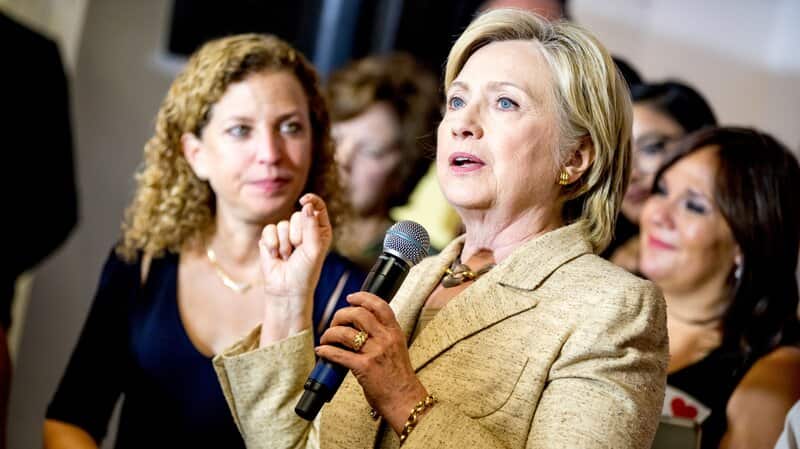 Politico hosted a “POLITICO Caucus” roundtable event, where a panel of Democratic party agents, insiders, operatives and strategists were sat down and asked about the state of the election. What Politico showed was a divided panel, with a very high level of distortion coming from the Hillary supporters on it. The panel was sharply divided, with one half believing that Sanders should drop out of the race, the sooner the better. The other half felt he needed to stay in until the end.

The actual answers the pro-Hillary half gave however indicates a deeper problem among her supporters, who seem unable to grasp the reality that their candidate is not actually in as strong a position as they’d want going into the convention.

One caucus member from Wisconsin:

He stands no chance of winning the nomination at this point, and the Democrats can show a united front while the Republicans are so deeply fractured.

The primary is over. There is no path, and there is no math.

One from New Hampshire:

If any adults actually supported Bernie, they would tell him to get out next Wednesday morning.

Most telling on this logical disconnect was this one from another Wisconsin democrat:

He should also do what Hillary did in ’08.

In 2008, Hillary Clinton refused to bow out until the primaries were over. In fact, she did not formally concede the race until almost a week had passed. Sanders has already indicated that should he not triumph in his campaign for pledged delegates by the end of the primary season, he will support Clinton. For her supporters, people who are well-connected into the DNC, to call for him to drop out now, instead of later, is suspicious. And when we look at the 2008 primary, the reason why is clear. For the last two months of primaries, Clinton won 58 percent of the pledged delegates. At this time, Sanders only needs to win this same 58 percent of the remaining delegates, matching this ratio. If this same ratio holds true, Sanders would win the primary season by the barest handful of delegates, and that is what Clinton is now afraid of.

The fear at this point is not in Sanders splitting the Democrats, but in Sanders beating Clinton. While some will claim that there is no math to support him, in reality the math does still support Sanders. This is a point of denial for the supporters of Clinton, and demonstrates a bubble of distortion in place around the campaign.

Ghost Of Conventions Past

This is mirrored from the 2012 campaign, when the Romney campaign engineered their own bubble of distortion to create an air of legitimacy to a highly questionable convention nominating process. This bubble then continued forward, resulting in an election night meltdown on television by advisor Karl Rove. Romney and his supporters believed their own fiction, and it ultimately cost them the election.

By failing to address reality, the Romney campaign wound up cut off and delusional. It could not handle trouble which hit, and what should have been minor stumbling blocks became major trouble.

The Real Problem For Democrats

The talk about “Bernie or Bust” or “Stand With Hillary” is typical primary season rhetoric. We saw the same thing in 2008. The difference this season is whom is leading, and by how much. But political memories are short, and for younger supporters of both candidates, this is likely to be one of their first campaigns. To demonstrate, the ratio of people who will not vote for the other candidates mirrors the age demographics as well.

And this is the issue, that the younger members of these caucus groups have not been fully brought into the fold. The same thing occurred in the 1970’s, when new voters for George McGovern were disheartened by his loss to Nixon, and over time a large portion of these young idealists became members of the Republican party, wanting to follow a winner. This need to follow a victor is innate to many, and natural. To avoid this, the Democratic Party truly needs to create a plan for consolidate around both candidates.

In 2008, Obama recruited Clinton as his Secretary of State in order to consolidate the party together. Clinton will need to make a similar concession, such as to have Sanders or close associate Elizabeth Warren run as her Vice President. Sanders would be a fool if he dropped out, or gave his endorsement, without such concessions.

Sanders himself has stated clearly that he would give his support should Clinton’s campaign platform meet certain expectations. This is all we can ask of him at this time. As well, President Clinton himself has already said that should Sanders triumph in the remaining primaries and secure the pledged delegates, he will be voting for Sanders, demonstrating how the party should be moving forward.

At this point, any talk about dropping out, or further attacks from either side, directly or through third-party agents, needs to stop. Otherwise we will be witnessing now the triumphant Democratic party this fall, but a party driven by elites off the cliff.